An Inside Look at the New Edelbrock AVS2 Carburetor 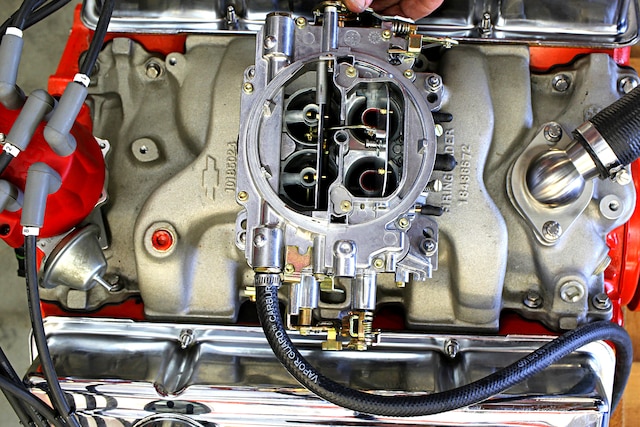 "It looks the same "

Too much of today's packaging and marketing can be more about the "spin" than about something really beneficial. But Edelbrock's AVS2 isn't just a new and improved appellation. A simple design change to the primary boosters makes this a whole different carburetor. There are some subtle, yet definite, differences why this idea works, and we'll show you why this is such a good idea.

Normally, a small change to something like a venturi booster would not be that big of a deal. But this is significant because of the effect it has on throttle response. In back-to-back tests, we experienced an immediate change in part-throttle response with the AVS2. We could literally feel it the first time we stepped on the throttle. This does not necessarily add more horsepower, but the response to throttle inputs certainly makes it appealing.

Many years ago, another carburetor company introduced an annular discharge version, so we performed an "outside the box" wide-open throttle (WOT) test. We put a carbureted LS1 on the dyno, first with a downleg booster carburetor and pulled the engine down to around 1,800 rpm at WOT. Even with a mild 222-degrees at 0.050 camshaft, the engine ran poorly, stumbled, and basically was very unhappy. Then we replaced that carburetor with the same cfm version except fitted with annular boosters. We then duplicated the test and the engine ran smoothly and gained over 80 lb-ft of torque at that same 1,800 rpm. That was our introduction to annular boosters.

The AVS2 doesn't really look any different than older AVS model carbs except for the new logo, but don't let appearances dissuade you. The boosters make an amazing difference.

Boosters in a carburetor are those small, round components that jut out into each venturi. Their job is to create a low-pressure area for the main metering circuit. Here's how it works. Fuel begins its passage to the engine in the carburetor's float bowl. When the throttle opens, air moves past and through the boosters, this creates low pressure inside the booster. With atmospheric (high) pressure pushing on the fuel in the bowls, the fuel moves through the main metering jets, is mixed with air (emulsified) in the main well, and then is pushed out the boosters and mixed with the engine's incoming air.

Standard boosters employ a single, large fuel outlet. At minor throttle openings and low engine speeds, fuel is introduced into the airstream in large drops, or globs. But large drops of fuel burn very slowly and it requires more fuel to vaporize even a portion of this fuel. Only vaporized fuel actually burns, some of this unburned fuel continues out the exhaust, making the engine run very poorly.

An annular booster externally appears similar to a standard booster but employs an annulus, or channel, to move fuel around the circumference of the inside diameter of the booster. Edelbrock's annular booster uses 12 small, equally spaced holes to introduce fuel into the incoming air. These multiple small holes do a better job of shearing and efficiently vaporizing the fuel as it enters the airstream. Oftentimes, this means less fuel is required, especially at low speeds, to make the same power.

We bolted a stock AVS2 on a small-block El Camino and measured the difference in throttle position under light acceleration compared to a typical square flange carburetor with downleg, single-outlet boosters. Light acceleration was measurably better. This was an early prototype that did not yet display the AVS2 identity plate.

Annular boosters do such a great job of creating a signal to draw fuel into the airstream that the system has to be drastically re-jetted to compensate for this higher efficiency. You will note on the AVS2 that only the primary side of the carburetor uses annular discharge boosters. That's because as the air velocity through the carburetor increases, there is less of a difference in performance between these two boosters. By the time the engine sees sufficient rpm to open the secondaries, the velocity is high enough that annular boosters offer no significant benefit.

As a simple test to reveal part-throttle driving time, try this little exercise. On your next in-town outing with your car, log the time you drive and keep track of how many times you lightly accelerate away from a dead stop compared to the number of times when you mash the throttle. Some people drive more conservatively than others, but unless you live on a dragstrip, the relationship will be 40 or 50:1 of light acceleration versus hard acceleration.

As a further test of this annular booster concept, we performed a simple driveability evaluation. We started with a carbureted small-block backed with a 4L60E transmission. This required the use of a carburetor-mounted throttle position sensor. The advantage to this was that we were able to record the exact throttle position for light acceleration away from a stop light. After 20 minutes of light acceleration driving from a dead stop, we registered an average 15 percent throttle opening on our standard flange carburetor using downleg boosters.

We then replaced that carb with an AVS2 with stock jetting. The only modification performed on the carburetor was to set the idle mixture and idle speed. With those set, we duplicated our drive procedure and recorded an average of between 12 and 13 percent throttle opening to produce the same light acceleration. While this is not a huge difference, it does point out that the more efficient annular boosters did improve the carburetor's low-speed efficiency to require less throttle opening to accelerate at the same rate.

This is an illustration of how an annular discharge booster works. Instead of one large discharge port, as with normal boosters, the annular flows fuel from 12 smaller holes located around the inside diameter of the booster. This creates much finer fuel droplets that burn more efficiently.

Currently, Edelbrock is offering three different size carburetors in the AVS2 line with a 500-, 650-, and a large 800-cfm version. AVS stands for air valve secondary, which describes the spring-loaded air-valve door. The Edelbrock carb uses a mechanical secondary but does not employ a secondary accelerator pump. At low engine speeds, if the throttle is slammed open, the air-valve remains closed until sufficient air demand from the engine increases air velocity that will push the air-valve open. This then initiates fuel flow from the secondary boosters.

The air-valve door spring tension is easily adjustable, and some might think that loosening the spring tension would add power at low speeds. While a slight loosening of the adjustments might make a minor improvement, drastically reducing its tension will only create a hesitation under hard throttle opening. The rule of thumb is if you notice the secondary opening—which some will attempt to claim is actually good—the spring tension is too loose. That "hit" is really a minor hesitation.

One of the attractive tuning points of the entire line of Edelbrock carburetors is that the primary metering side is both very easy to adjust and offers the ability to make very slight changes to the metering circuit both to improve throttle response and perhaps achieve small gains in fuel mileage. All of Edelbrock's carburetors control the primary fuel flow in the same manner, using a primary metering jet that includes a tapered metering rod.

The metering rod is controlled by a piston that includes a small, calibrated spring not much bigger than ball point pen spring. With high manifold vacuum, the vacuum pulls down on the piston and compresses the spring. This places the wide portion of the tapered metering rod in the primary jet, reducing the fuel flow. This leans the air/fuel ratio mixture, which can often lead to improved throttle response and better mileage.

This is an annular booster removed from the carburetor. You can see several of the smaller holes on the inside circumference of the booster. Edelbrock has anodized the annular boosters red to make them easier to identify.

When the throttle is opened and load increases, manifold vacuum drops off and, at the proper time, the spring will push up on the piston, raising the metering rod so that the smaller, tapered end of the rod increases the flow area of the jet and richens the air/fuel ratio. The advantage of this system is that the tuner now has two different diameters of the metering rod—the primary jet and the power valve spring calibration—to use as tuning points. This is in comparison to a traditional carburetor with just a primary jet and the power valve. If you are familiar with Quadrajet carburetors, their primary metering system is very similar.

This rather quick description should illustrate that there are multiple advantages to choosing the AVS2 carb for the typical, mild street engine application. The AVS2 offers the advantage of super-responsive throttle action every time you hit the throttle. That should be worth something. CHP

Minor primary side metering changes can be accomplished by loosening the Torx head screw on top of the carb and removing the primary metering rod and power valve spring. This does not require removing the carburetor lid unless you need to change the primary or secondary jets.

If you want to experiment with the secondary air-valve door spring adjustment, this is also easily accessed. Loosen the Torx locking screw and then turn the straight blade screwdriver slot. Clockwise tightens the spring tension and delays the opening while counterclockwise loosens the tension on the air-valve door. Make very minor changes here to evaluate the effect.

Setting the idle mixture is easy as both screws are located in the front. Edelbrock recommends having the engine fully warm and connect a vacuum gauge to manifold vacuum. Carefully adjust one idle mixture screw to obtain the highest manifold vacuum and rpm. If the idle speed increases more than 100 rpm, reduce the idle speed and then adjust the second mixture screw for the highest engine speed. Then turn both mixtures screws in (leaner) to see a 20 rpm drop. This is the best lean-idle setting.