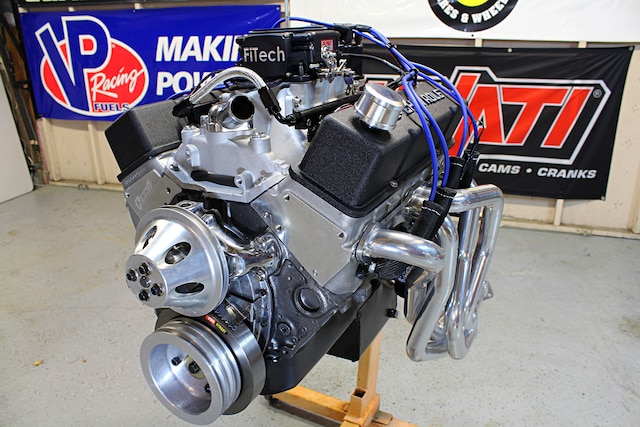 All-out horsepower is why we get up in the morning. It's at the heart of this magazine, the hot rodding hobby, and might actually be the reason the world goes 'round—though we lack the astrophysical expertise to prove the latter.

Bigger-than-big cams, sky-high compression ratios, and mondo cubic inches put a smile on any face, but in our older, wiser age we'll concede that in a daily driver application, they can kind of kill the vibe. Sitting in SoCal traffic with one foot on the brake and the other nervously tapping the gas to prevent a stall is an anxiety and angst-riddled activity, and we've lost many a brain cell sucking up pig-rich-so-it-will-idle-cool fumes. Yeah, sometimes the gnarliest engines are best suited for Sunday street/strip'ers and full-blown race cars. We're of the "I love the smell of race gas, but I don't want to smell like race gas" mentality.

So, for our latest cruiser project we wanted to build an engine that could start cold, deliver reasonable mpg, and haul the mail all the while. In other words, we wanted LS reliability and power density, but we wanted to execute it in a humble first-gen small-block Chevy platform. Could it be done? Of course, but it meant teaming up with some top-tier parts people and carefully selecting components that would work to achieve our goals.

The basis of the build consisted of a factory, four-bolt-main small-block, a stroker kit to maximize cubic inches, an innovative camshaft grind, and the latest in high-tech EFI and ignition components to give our engine the most punch per cube. Here's how we did it. CHP

The beginning of any factory-block-based 383 build inevitably involves some time spent with a die grinder. Note the small notch needed at the bottom of the cylinder bore. This is to clear the head of the rod bolt.

Gapping the JE Pro Seal piston rings is a tedious process but it is essential to achieving optimal performance. Each top and second ring was gapped and checked in the bore with a feeler gauge. The gaps were set based off the specs included with the SRP pistons.

Next, the SRP pistons, which are a hearty forged 4032 aluminum design, were assembled with the Scat H-beam connecting rods and ARP rod bolts. This is a very stout combo ready for anything this engine can throw at it. Full-floating wristpins are slid into place and retained using Spirolox rings.

Next, the rings are installed on the pistons and they are neatly arranged in preparation for assembly. A light coating of 20wt engine oil is used to lubricate the rings and pins before assembly.

The block, which was thoroughly cleaned after clearancing for the stroker assembly has the rear main seal installed as well as the upper shells of the main bearings. A slight dab of sealer on the rear cap pad and a coating of assembly lubricant prepares it for the crankshaft.

The Scat forged 3.750-inch crankshaft is carefully lowered into place in the engine block.

The engine's mains are torqued according to the proper sequence in three stages. The final torque values on the outer bolts are 65 ft-lb while the inner main bolts get a snugger 70 ft-lb.

Each rod cap was disassembled and the bearings inserted. Assembly lubricant is liberally applied to the bearing surface on both the rod and cap side.

A tapered ring compressor is used to install the SRP pistons in their bores. This style of compressor is highly recommended for pistons using modern, thinner rings.

The Comp hydraulic roller cam is lubed up and slid into the block. This is an XFI grind, which has very quick ramps to maximize its short duration. The specs come in at 210/218-degree duration at 0.050-inch lift and a respectable 0.560/0.555-inch valve lift. The cam is ground on a wide lobe separation angle of 113-degrees, which will provide good idle vacuum.

The timing set is installed and a thrust button is used to control camshaft endplay. This butts up against the timing cover and keeps the cam from walking back and forth.

A timing wheel is used to verify true top dead center (TDC) on cylinder No. 1. Often, aftermarket timing covers and balancers can be slightly off, so it's good to find true TDC.

The timing cover is installed with a fresh gasket and tightened in place.

A Summit Racing oil pump will provide pressurized lifeblood to the engine and a Summit oil pan seals the bottom half of the engine.

Next, Summit Racing aluminum cylinder heads are installed on top of quality MLS-style gaskets. These heads feature 2.02/1.60-inch valves and high-flowing, as-cast ports. The compression ratio will come in at 9.5:1 with their 64cc chambers and the SRP pistons.

The Comp hydraulic roller lifters were soaked in oil overnight and then installed into their bores.

First, the engine was turned over by hand until each pair of lifters was on the camshaft's base circle. Next, the pushrods and rockers were installed and tightened to zero lash. From that point, each nut was turned half a rotation to preload the hydraulic lifters.

A FiTech aluminum intake was lowered into place. The intake has cast-in bungs to support fuel injectors, which were installed later as part of the FiTech Go Port fuel-injection system the engine will run.

A Summit Racing SFI balancer is installed on the snout of the crankshaft using an installer tool.

A PerTronix distributor is installed in the engine and aligned so the rotor is pointed at cylinder No. 1. This system will provide a hot, accurate spark to maximize combustion.

To achieve our goal of cold-start friendliness, fuel economy, and performance, a FiTech Go Port EFI was used. The system is self-learning and provides the additional efficiency of tuned port EFI. Best yet, the entire system is as plug-and-play as bolting on an intake.

With the engine back from the dyno, a McLeod clutch and flywheel were installed in preparation for its long life to come in a fun, practical street car.

On the Dyno
On the Westech engine dyno, Steve Brul punched all of the vital engine specs into the FiTech hand-held computer and the engine fired to life. After a break-in cycle and a few pulls to let the fuel injection learn all of the necessary parameters, the engine was pulled for power and torque. It hit all of our goals, belching out 407 horsepower (even with the tiny cam) and over 400 lb-ft of torque from an insane 2,600-5,300 rpm, with peak torque of 440 lb-ft occurring at 4,200 rpm—a torque band so flat you could eat off of it.

So what do you do when you have a low-compression small-block Chevy in your ride and want more power? Simple: Add boost.