Tricks to get more power from your small-block crate engine

Punching up the power in a wallet-friendly small-block stroker 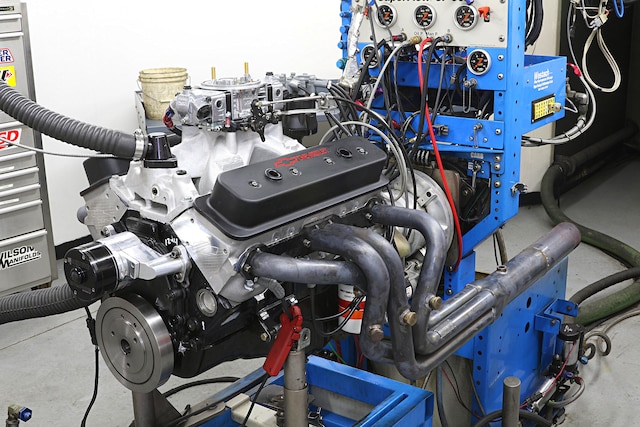 Crate engines are the poster children for automotive instant gratification. Have a tired engine in your Chevy project car? Simple fix. A few mouse clicks or a phone call and in a few days a crate full of automotive goodness arrives at your doorstep. And while the world is busy fawning over LS and LT engines, there's nothing wrong with good old small-block power. Besides, it's less cash to get in your car and fired up.

One such crate engine is Chevrolet Performance's SP383 Deluxe small-block (PN 193555672). This stroker gives you what you need for the street, and that's torque. Rated at 435 hp and 445 lb-ft of torque, it gives a lot of performance right out of the box. But, there's nothing wrong with aspiring for just "a little bit more."

The SP383 already came with some great Fast Burn aluminum heads so we decided to mess around with intake manifolds and a cam swap since that seemed like the best bang for our collective bucks. And for giggles, we tried out a small nitrous shot since that's a quick way to get a power boost at the local test-and-tune drag night. So follow along as we goose a bit more power out of an already stout small-block.

The Chevrolet Performance SP383 crate is advertised at 435 hp (at 5,600 rpm) and 445 lb-ft (at 4,600 rpm). Well, as you can see, those numbers were nearly identical to what we nailed down on Westech's Superflow 902 dyno. This was done with the included GM single-plane intake and a Holley 750 XP carb along with an MSD distributor and a set of Hooker dyno headers.

We felt the cam that came in the SP383 wasn't big enough to really take advantage of the supplied single-plane high-rise GM intake. Fortunately, GM makes it easy to swap intakes since the Fast Burn heads are drilled for both standard and Vortec-style intakes.

We decided to try out an Edelbrock RPM Air-Gap dual-plane intake. Given the smallish cam specs (222/230-degree duration, 0.509/0.528-inch lift, and a 112-degree LSA) we felt this would really wake up the engine in the lower rpm range where most street driving is done.

And go figure, we were right. With the dual-plane intake, the stroked small-block made considerably more torque and a bit more hp all the to 4,800 rpm. After 4,900 rpm the single-plane make more steam, but only by a little bit. For a street car we would much rather have this combination.

Of course, the easiest way to get more power is to slap on a shot of nitrous, so we did. In this case, a Zex plate system with some jets (.033 gas and .036 N2O) that should add another 75 hp to the equation. The SP383 has hypereutectic pistons so we stayed conservative and made sure to back down the timing 2 degrees.

As we said, the SP383 ships with a fairly mild cam, which makes it a great cruiser, but what if you want something just a bit more rowdy? Well, to get a bit more power we picked up cam from Howards. The new stick came in at 231/235-degree duration with slightly more lift (0.510/0.530-inch), and a more aggressive 108 LSA.

Howards suggested we move to a better valvespring so they set us up with a set of their beehive springs and the required retainers and locks. The stiffer springs should come in handy with the increased rpm we're expecting.

Yeah, what a difference a cam makes. Tested with the GM single-plane high-rise intake, the SP383 with the new cam made more power everywhere, and lots of it over most of the pull. Not only did the peak hp number shoot up to 472 hp (a gain of 35 peak hp) but the peak number moved out to 6,000 rpm and the engine easily pulled to 6,500 rpm. Torque was up as well with a peak gain of 14 lb-ft. With the new cam, the SP383 is able to take better advantage of the GM intake that ships with the engine.

Out of curiosity we decided to toss on a dual-plane intake to gauge the effect. This time around it was a Weiand Street Warrior.

With the same setup as before—Holley 750 XP carb, billet MSD distributor, and 1.75-inch long-tube headers—we were ready to spin up the SP383 for its grand finale.

As expected, the power numbers early in the pull favored the dual-plane. But because of the new camshaft it wasn't as dramatic as it was with the stock GM cam. Below 4,500, the dual-plane was the way to go, but from 4,700 rpm on up the single-plane made more power and torque. We call this nearly a tie, and which intake is best really depends on how you plan to drive your Chevy. With just some basic mods we were able to wring out a bit more power and make a great crate engine even better.