Cooling a Mighty Big-Block Chevy is Easier Than You Think

Our big-block–powered 1967 Camaro gets a new cooling system 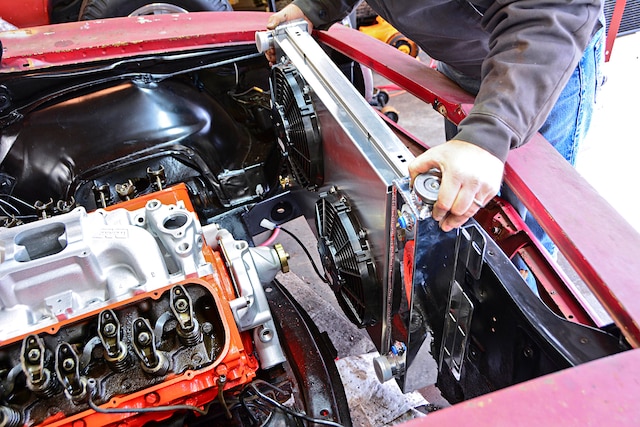 Dealing with an old Chevy that got the majority of its modifications in the 1980s is like stepping back in time—and not in a good way. Our 1967 Camaro was originally a six-cylinder car, and like most early Camaros with a base-model engine, the wimpy inline-six was traded for something a little more muscular. In our case, it was swapped for a 396ci big-block with a small cam and some 1980's appearance modifications. While the car will crank and run, our intent with it is to bring it up to modern standards, starting with the cooling system.

The car didn't appear to have any coolant leaks or actual problems in the cooling system, but anything that has been sitting for a long time is susceptible to corrosion and potential problems down the road. At the very least, new hoses would've eased our mind, but we wanted to upgrade the cooling system and ensure that the big-block would run cool, whether it's on the highway or sitting in traffic. For this, we reached out to the folks at Holley. Once known only for its carburetors, Holley now offers a wide range of brands and products, including a new line of radiators and cooling system accessories under the Frostbite brand.

Along with a new direct-fit Frostbite three-row aluminum radiator, we opted for a matching electric fan and shroud assembly to eliminate the old mechanical fan setup on our car. The dual SPAL electric fans are wired in using a Frostbite relay kit, which allow the fans to be controlled by the temperature of the engine. While we had the cooling system disassembled, we replaced the old water pump with a new high-performance aluminum unit from Weiand, and replaced all of the fittings, hoses, and even the hard transmission lines. We finished it off with a Mr. Gasket universal overflow tank.

We spent a weekend in the shop assembling and installing the cooling system upgrades, and the results are impressive in both performance and appearance. The new radiator and water pump are lighter than the originals and we should be freeing up a couple of horsepower by removing the mechanical fan. And let's not forget the fact that the big-block now runs cool consistently, no matter the conditions. With a collection of new products from Frostbite, Weiand, and Mr. Gasket, we brought this big-block out of the 1980s and into the modern era with a high-performance cooling system. CHP

Welcome to the 1980s. Our 1967 Camaro's six-cylinder engine has been swapped for a big-block and the only modification to the cooling system is a flex fan. We're going to bring this cooling system into the modern era with a new radiator, fan, and more.

While we allow the coolant to drain from the radiator, we loosen the transmission cooler lines. After further inspection, the transmission lines are kinked in several areas, so we'll install new hard lines as part of our cooling system upgrade.

We removed the four bolts holding the radiator and lifted it out of the engine bay. This radiator was not leaking, so it will go to the swap meet pile and we should be able to get a few bucks to offset the cost of our upgrades.

The flex fan will also go into the swap meet pile. Yes, people still use them, and yes, they are still effective. However, a mechanical fan is only effective if there is a shroud to help direct the airflow. In this case, the fan had no positive influence on the cooling system.

After removing the alternator and associated brackets, we can loosen the four water pump bolts and remove the crusty water pump.

We're replacing the original water pump with a Weiand Action Plus aluminum water pump. Despite the lightweight design, the pump features a heavy-duty shaft, pulley hub, and impellers.

Using a Summit Racing engine bolt kit, we attach the new Weiand water pump to the block. We did have to run to the local hardware store to get a 3/8-inch bolt that measures 3 1/2 inches in length for one of the four water pump bosses.

The heart of the new cooling system is a Frostbite aluminum radiator. It's an FB148 model, which is a three-row unit that can handle 450-750 horsepower, so it should be perfect for our big-block. The Frostbite radiator bolts directly into place on our 1967 Camaro.

The new Frostbite high-performance fan shroud assembly (PN FB513H) is a perfect fit for the 23-inch core in our FB148 radiator. We start by mocking up the SPAL electric fans in the pre-cut holes using a pen to mark the holes that need to be drilled.

We drilled four holes per fan, being sure to keep the protective film on the shroud during this process. We used a 1/4-inch drill bit.

The kit did not come with mounting hardware so we grabbed a handful of 1/4-20 bolts, making sure they were 1 inch in length.

Once the fans are mounted to the shroud, we can then attach the shroud assembly to the radiator using self-tapping sheetmetal screws in the pre-drilled holes.

Installing the radiator is as simple as tightening four bolts. The position of the new Frostbite radiator is the same as original so all of our original-style lines and hoses can be installed easily.

Any time you service a cooling system, it makes sense to replace the thermostat and thermostat housing. The previous housing was chrome, and those are known to leak, so we replaced it with this stock-style one. We got the thermostat, housing, and gasket from rockauto.com.

To connect the dual SPAL electric fans, we used a Frostbite relay wiring kit (PN FB403). The kit includes this temperature sending unit, and we threaded it into the port closest to the thermostat. This will ultimately control when the fans turn on and off.

We picked up four new heater hose fittings from Summit Racing and applied thread sealer to prevent leaks. We also used a formed hose to make the 90-degree bend from the intake manifold to the water pump. If you ask nice enough, the local parts store may let you search through their formed heater hoses to find something that you can trim to fit.

The original transmission cooler lines were toast, so we bought new ones from Summit Racing. Although they were pre-bent, they required some tweaking to fish between the engine and crossmember. Once they lined up with no binding, we tightened them with a line wrench.

New Gates radiator hoses came from rockauto.com. The upper radiator hose was a perfect fit, but we had to trim the lower hose to fit. We also noticed that the new lower hose wouldn't fit over the water pump outlet. Our fix involved dipping the end of the hose in hot water, which allowed the rubber to stretch just enough to fit the outlet.

The Frostbite FB403 relay kit had plenty of wire, giving us lots of options for mounting the relay. We chose to mount it near the radiator, where the original voltage regulator was located. The light orange wire connects to a 12-volt source, while the gray wire goes to the sending unit, and the red wire connects to the fan harnesses.

Finally, we attach the large yellow wire to the provided fused power wire seen here. Using terminals from the kit, we piece together the wiring and attach it to the positive battery cable. The only thing left is to connect the ground wires from the fan harness to the chassis.

Once all of our hoses are secured and the connections are crimped, we can pour a mixture of coolant into the new radiator. We ran a short piece of 5/16-inch rubber hose to a Mr. Gasket overflow tank, but a stock tank will also work with the new radiator.