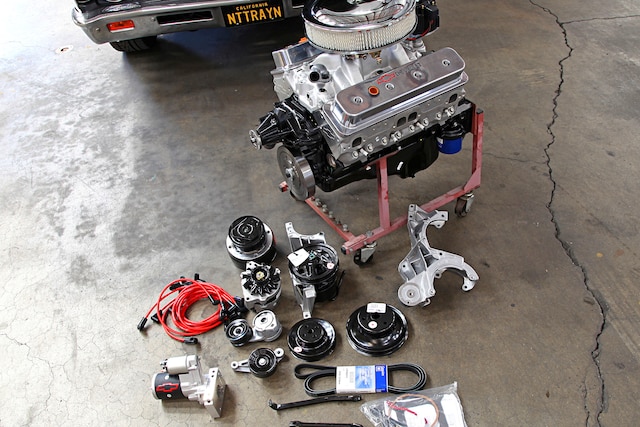 If you've been into Chevrolet performance for any time at all and sport graying temples you understand the way it used to be. We once lived in an era without options. You just couldn't go out and buy a precision-built crate engine for your Chevelle, Camaro, or Nova. You had engine failure or the darned thing was just plum worn out. There was the need for a quick solution and there wasn't one to be found anywhere short of a gambling journey to the local salvage yard or a rebuilt engine from Pep Boys or a nearby Sears Automotive Store back in the day (yes, you used to be able to buy engines from Sears).

In those days, we drove to the salvage yard with a toolbox, found a cast-iron hopeful tucked between the fenders of a smashed-up Chevelle, and hauled it home in hopes it was void of unpleasant noises and excessive oil consumption. Few things were more deflating than a weekend spent installing a junkyard engine only to discover it was worse than what you pulled out.

Today, we live in an age where it has never been easier to get right back into power with a warranty thanks to the SP350/385 Turn-Key small-block 350ci V-8 package from Chevrolet Performance.

As incredible as it may seem, the legendary small-block Chevy has been in continuous production for more than 62 years, the longest engine production run in American automotive history. Why? Because we love the Gen I small-block Chevy V-8 in all its many forms and are still willing to buy new ones from anyone willing to manufacture them. Chevrolet Performance continues to offer the small-block Chevy because these engines are as viable as they ever were and still engineered to make a lot of power for the money.

These fast-burn heads allow the SP350/385 to rev higher to make the most of every cubic inch of air that passes through them. The engine consists of a new iron block with four-bolt mains, a forged-steel crankshaft, aggressive hydraulic roller camshaft, and durable high-silicon hypereutectic pistons. Hypereutectic pistons have excellent expansion properties, which means no cold-start rattle.

What makes the SP350/385 (385 horsepower) a great value is everything you need to heat up the headers, including the distributor, carburetor, and balancer, is already installed. The starter, fuel pump, air-conditioning compressor, alternator, front-end accessory drive kit, and more are also included and ready for you to install, making it turnkey and ready to go. CHP

Joel Rode of Hot Rod Specialties in Upland, California, has uncrated the SP350/385 and goes right to work dressing it up for installation. The crate package arrives on your doorstep complete with everything you're going to need for installation. Before you order the SP350, ascertain your application because you may not need everything in the kit. You may be better off with a comparable SP350 Base long-block from Chevrolet and amassing the bolt-on components you're going to need.

The SP350 is dressed and ready for a test-fit. We stress a test-fit because the existing small-block in Joel's 1969 Nova is fitted with an Eddie Motorsports front drive system, PerTronix ignition, and Doug's headers. We're going to show you how easy the engine is to dress and install.

Joel begins removal of a road-worn 350ci Chevrolet, which has been a faithful servant. When he discovered the SP350 crate option and how affordable it was, he just couldn't pass it up. When you consider the cost of an engine rebuild and the downtime involved, the SP350 is very attractive.

Here's a closer look at the SP350/385 Turn-Key engine. This is a factory-style front drive system with alternator, power steering pump, and pancake air-conditioning compressor. You may encounter space issues with some aftermarket radiators. Also keep in mind the need for a correct engine-driven fan designed for serpentine belt-drive use, which gets air moving in the right direction.

Joel's Nova was factory-fitted with a 250ci Chevy inline-six. When a previous owner did the swap to a 350 small-block, they erred in welding the engine mount brackets to the subframe, throwing the engine-to-chassis alignment off.

The SP350, with its stock, 1990's-vintage serpentine front drive system clears the wide aftermarket radiator and electric cooling fans with plenty of room to spare.

Chevrolet Performance provides this mechanical fuel pump with the SP350 engine swap package. Joel ran into clearance issues between the fuel pump and the subframe when he was decking the engine, which was an issue particular to his Nova.

Joel has chosen to swap the Eddie Motorsports front drive system to the SP350.

Joel had to cut out the aforementioned engine mount brackets, and now the SP350 fits perfectly.

When Joel was decking the engine he discovered a torn rubber engine mount, which could have been catastrophic. He opted for a fresh pair of polyurethane engine mounts from Energy Suspension, which will provide durability and vibration isolation.

Our SP350 has undergone final decking and now it's time for all those pesky steps necessary to get a fresh engine fired. Because the engine is generously lubricated during assembly, you don't necessarily have to prime the oiling system, but it is suggested. You can never have too much oil on moving parts.

Joel gets the Doug's long-tube ceramic-coated headers connected to the exhaust system. It is always a good idea to install new gaskets and check the system for leaks.

Joel's 850-cfm Holley from the old 350 will not be swapped to the SP350. However, the dual-feed plumbing will be transferred to the Holley 750-cfm carburetor Chevrolet Performance has provided. Joel admits his 850-cfm atomizer was too large for the 350.

The 750-cfm Holley 4150 is placed and anchored. It's a good idea to use an insulator gasket between the carburetor and manifold to enable your Holley to run cooler. Chevrolet Performance provides the base gasket and all hardware to get the job done.