A blown street stroker that plays well with pump gas 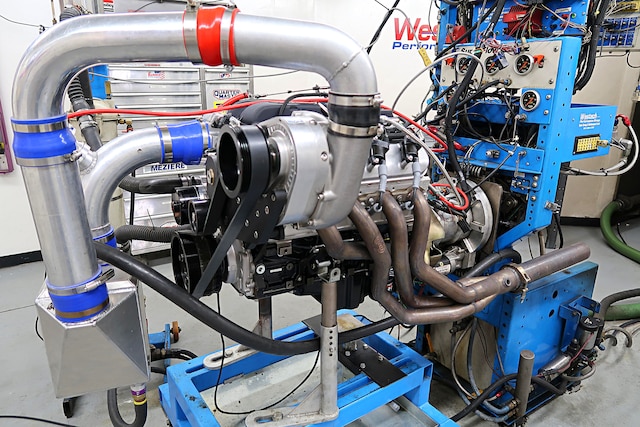 When it comes to performance, the easiest route is to combine more of everything. What do we mean by everything? Well, if a little compression is good, or a little camshaft is good, or a little displacement is good, then more must be better, right? There is definitely a method to this madness, but so, too, are their limitations. Big power certainly comes from things like high compression and wild cam timing, but what happens if a track-only monster isn't your goal? What happens if you are looking to build power for a street car (like most of us)? Things like high compression and wild cam timing can certainly build power, but they also tend to create problems. I mean, who has the money to pop for the high-octane race fuel required to run those elevated compression ratios on the street? When it comes to street performance, compromise is usually the name of the game, but there are steps that can be taken to improve performance without resorting to the expense of race gas. Enter the complete street stroker.

The first weapon in any arsenal is to choose the right engine, and, of course, the easiest way to make power today is with an LS. To get things started we chose a new 5.3L block from Summit Racing. We know from experience just how stout the iron truck blocks are, having pushed them to stratospheric levels many times in the past. Since this buildup was destined for street use, we made sure to add something we knew would improve power: displacement. Rather than go with the standard-bore 5.3L block, we opted for the one bored out to 5.7L (LS1) dimensions of 3.898. This was a significant step up from the 3.78-inch bore employed on the stock 4.8/5.3L. Right off the bat, this improved the displacement and power potential of our combination, but we didn't stop there. The increase in bore size was combined with an increase in stroke, from 3.622 inches to 4.000 inches. This brought the finished displacement up to 381.88 cubic inches, which we rounded up to 382 cubes.

The 4340 forged steel crank and rods from K1 Technologies were combined with a set of forged pistons from JE Pistons to produce an all-but-bulletproof bottom end. The forged rotating assembly not only ensured plenty of strength, but also extra power, and on pump gas no less. The reason for this is that the 29.9cc donut-dished JE forged pistons combined with the 64cc chambers employed on our TFS GenX 215 cylinder heads to produce a static compression ratio of just 8.6:1. This boost-friendly compression ratio was chosen for a reason, as not only did we employ extra displacement in our quest for street power, we also decided the combination would benefit from positive pressure. The only thing better than displacement or boost is displacement and boost.

To supply positive pressure to our street stroker we employed a ProCharger P-1X centrifugal supercharger. If you are looking to make big power on a street engine with pump gas, a little boost goes a long way. Since our 382 featured a static compression ratio of 8.6:1, it was begging for boost. To that end, we installed the ProCharger P-1X supercharger onto the awaiting stroker. The P-1X was equipped with a 4.25-inch blower pulley and, when combined with the 7.75-inch crank pulley, the result was a peak boost of 9.1 psi at 6,500 rpm. Remember, the boost supplied by the centrifugal supercharger increases with engine speed. To allow us to run adequate boost and timing on pump gas, we took the liberty of adding an air-to-water (ATW) intercooler from ProCharger. This dropped the inlet air temps by nearly 100 degrees, allowing us to maximize the power output while maintaining a pump-gas friendly tune. After tuning, the supercharged combination produced peak numbers of 779.9 (780) hp at 6,500 rpm and 646 lb-ft of torque at 6,000 rpm. The combination of the extra displacement and low compression and boost levels allowed us to maximize the power output of our complete street stroker, all on pump gas.

To prep for the extra displacement, the six-bolt iron truck block was bored to the standard 5.7L LS1 bore size of 3.898 inches.

In addition to the increase in bore size, we also stepped up in stroke length. K1 supplied the 4340 forged steel stroker crank (PN 012FAE40058). The heavy-duty 4.000-inch crank was equipped with a 58X reluctor wheel. Both the crank and reluctor wheel came core-hardened using nitride for increased strength.

To help keep the static compression to a blower-friendly 8.6:1, each JE forged stroker piston (PN 326374) featured a generous 29.9cc dish. The unique profile, called a donut dish, reminded us of the newer LT-style pistons used for direct injection.

After gapping the JE rings, we combined the pistons, pins, and connecting rods.

Using an adjustable ring compressor from Summit Racing, we installed each piston/rod assembly into their respective bores.

After installation of the camshaft and cam retaining plate, we set the engine at TDC then bolted the Comp 4X timing gear set (PN 3172KT) in place using ARP hardware (PN 134-1002).

To ensure the boost stayed inside the engine, we installed a set of ARP head studs (PN 234-4344) and JE MLS head gaskets.

The stock 1.7:1-ratio rockers were replaced by a set of Comp rockers with trunnion upgrades. Comp Cams also supplied the necessary hardened pushrods.

The induction system is a critical part of any successful performance engine, so we chose this MSD Atomic intake for the supercharged stroker.

The ATI Super Damper was a serious step up from the stock truck damper, and is the right offset to work with our ProCharger crank pulley. Before putting the 382 on the dyno we sealed up the bottom end with a Holley oil pan (PN 302-1BK).

Before the installation of the supercharger, we dyno'd the low-compression 382 stroker in naturally aspirated trim. After the break-in and tuning with the Holley HP management system, the 382 pumped out 514 hp at 6,100 rpm and 472 lb-ft of torque at 5,100 rpm. Strong numbers for a low-compression LS that could run on 87-octane.

To add even more fun to the LS street stroker, we installed a ProCharger P-1X centrifugal supercharger. Capable of supporting over 900 hp, the P-1X was more than enough blower for our street engine.

The blower was equipped with a 4.25-inch blower pulley that produced a peak boost pressure of 9.1 psi.

We ran the boost through a ProCharger air-to-water intercooler to help keep the inlet temps in check. This helped us push up the boost a bit on our 91-octane pump gas.

The graph clearly shows that, when it comes to adding power, it's really hard to beat boost. After bolting on the P-1X blower, the power output of our 382 jumped to 780 hp at 6,500 rpm and 646 lb-ft of torque at 6,000 rpm. That's a gain of 266 horsepower over what it churned out in naturally aspirated trim.

How to Easily Gain 100 Horsepower on a 5.3L LS Engine » Read More
1955 Chevy Built From All New Parts! » Read More
Week To Wicked: Did We Finish As Planned? - Day Five Build Recap