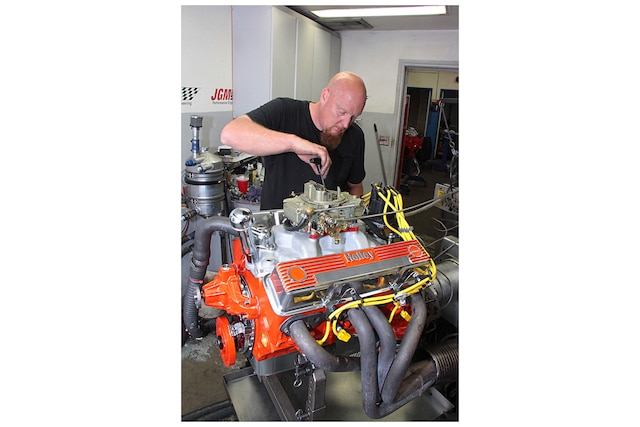 Jeff Latimer and I were kicking story ideas around recently in his shop when he came up with a winner. What if you decided to build a small-block Chevy for your Corvette using only what was available in 1968 and put it on the dyno? How much power could you make based only on what was available 50 years ago. What’s more, what have we learned in the years since about making power and could we make more?

If you’re a graying hot rodder with achy bones and a long memory, you remember 1968 quite well. We were all young and had the limited cash we earned flipping hamburgers, mowing yards, painting houses, prepping new cars, or oiling lanes at the bowling alley. Money was hard to come by at that age and graduation from high school was a year or two away. We had groovy aftermarket parts from a number of legendary names like Holley, Sig Erson, Isky, Offenhauser, Edelbrock, Cal Custom, Carter, Weber, Mr. Gasket, Clay Smith, Moroso, Milodon and Summit Racing Equipment. Summit Racing Equipment opened its doors for the first time that year, and is now celebrating 50 years of changing the way we think about buying speed parts.

Jeff decided to act on this idea of a retro 327 amassing what he had in his stash of parts plus what he could procure from friends. Forget aftermarket aluminum heads, electronic fuel injection, nitrous systems, roller cams, multi-spark ignitions, and the rest of it. These elements weren’t available to the novice in 1968. The best you could hope for were “double-hump” iron heads or perhaps the classic 283 Power Pack castings everyone wanted.

Jeff found a standard bore 1963 327 #3782870 block and brought it to JGM Performance Engineering in Valencia, California, for machine work. From here, the block could have become anything from a radical roller stroker to the old-school flat tappet street beast we’re building here.

His search also yielded a pair of #3890462 head castings, one of the two most popular double-hump castings out there in 1968. He took these heads and had custom port work performed by Chris Brintnell along with the larger 2.02/1.60-inch intake/exhaust valves. He limited his efforts on these heads to what you could do in 1968.

The Edelbrock Streetmaster and C3B manifolds, though of different dynamics, have long intake runners. Long runners are what you want on the street because they contribute to low-end torque. Forget horsepower on the street. What you want at the traffic light is torque for the launch. The Streetmaster, as its name implies, was conceived for street use during the Arab Oil Embargo when fuel doubled in price and was scarce as hell to boot.

Edelbrock’s Streetmaster is a well thought out combination of mid-range torque and horsepower from a single-plane manifold. It doesn’t look like it could make good low-end torque until you consider the long, spidery runners. The C3B, as designed, is a terrific street/strip manifold. Great low-to-mid-range torque yet it makes horsepower at 6,000-6,500 rpm. In dyno testing we tried three different carburetor sizes; 600-, 650- and 750-cfm. The greatest difference in power came from the 0-80783C 750-cfm Holley.

You’re going to examine this period 327 and spot the PerTronix Ignitor, which was not available in 1968. However, solid-state ignition was available. You’re also going to see three contemporary Holley carburetors of different sizes not available then. However, Holley carburetors in these sizes were widely available. We leaned toward the side of convenience getting new carburetors from Holley. Taylor ignition wires like these from Summit Racing Equipment weren’t available either; however, they look sharp and won’t go up in smoke next to hot headers.

What this period 327 teaches us is necessity has always been the mother of invention. Back in the day, we didn’t have a wealth of aftermarket performance parts available to us today. We used our imaginations and tried different approaches to see what worked. The advantage we have today is gleaning from what we’ve learned in the years since, getting 400+ horsepower and more than 400 lb-ft of torque from a 327ci. Vette

We’re working with a #3782870 327 block that has been precision machined and prepped by JGM Performance Engineering. The cylinders have been bored and honed to 4.030-inches with a nice crosshatch pattern for excellent ring seating. A good break-in means excellent cylinder sealing.

Look for the block casting number and date code at the back of the block on the left-hand side with small-blocks just above the bellhousing mating surface. Big-blocks will have it on the right side of the engine block above the oil pan rails. The seven-digit casting number clearly identifies the block. The #3782870 327 two-bolt main block was produced from 1962-’67 and are becoming tougher to find.

Jeff has opted for a hot flat tappet hydraulic camshaft similar to what you would have found on the shelf in 1968 with 228/228-degrees duration at 0.050-inch, 0.512-inch valve lift intake and exhaust with a 108-degree lobe separation angle. This is a cam with good street manners that will make horsepower at high rpm yet offer good mid-range torque at the traffic light.

This is a small-journal forged-steel 327 crankshaft secured by two-bolt mains. The crank was balanced by Doug Treutelaar with the correct bob weight requiring Mallory metal due to the use of heavier forged Speed Pro pistons.

JGM Performance Engineering prepared this crank, chamfering the main and rod journal oil holes for an improved oil wedge between the journal and bearing.

When you’re building 400 horsepower and 400 lb-ft of torque, stock rods are adequate to 6,500 rpm with the ARP bolts. Jeff has chosen coated Speed Pro forged 4.030-inch pistons from Summit Racing Equipment with moly rings sporting a compression ratio of 9.5:1 for use with pump gas. You can get it well over 400 horsepower by raising the compression ratio to 10.5:1.

It is suggested you hone the lifter bores during any engine build, which improves oil control around the lifters. Another suggestion is to coat the lifter valley and crankcase with GE Glyptal 1201 for improved oil return flow to the sump.

Because we’re building a stock 327 bottom end, there’s little to be concerned about in terms of fit and clearances. However, we stress two elements: piston deck clearances and valve timing. Never take for granted what’s on the cam card. Check it out yourself. Check true top-dead-center (TDC) at the No. 1 cylinder, as shown here.

Here’s the crank forging number of #3782680 indicating a small-journal steel crankshaft with a 3.250-inch stroke.

Jeff had a pair of #3890462 “double-hump” head castings tucked away in his stash of vintage Chevy engine parts. Jeff is fitting these castings with 2.02/1.60-inch valves along with a custom port job performed by Chris Brintnell.

We like Chris’ custom port and bowl work on these heads. Port and bowl work is what gives us the edge over anything we might have done in 1968. There were incredible head-porters back in the day. We’ve learned about port and chamber dynamics since. Note the improved valve shrouding for improved flow.

The double-hump identification mark cast into these heads defines these high-performance head castings. The two most popular double-hump castings are #3890462 and #3917291, which seem to have performed best in flow-bench and dyno testing.

Chris did an excellent job of hogging out these intake ports along with leaving some areas rough to keep fuel droplets in suspension.

The exhaust ports have been opened up to both reduce restriction and improve velocity.

Our completed period-correct long-block is on the way to completion. The authentic look of the small-block 327 we remember gives us a rush.

One issue we will long remember is leaks. It seemed as though nothing we did back in the day prevented leakage. Jeff has a regimen where he applies modest amounts of Permatex’s The Right Stuff between the end seals and contact surfaces. Then, he properly seats the seals and confirms full contact.

Oil pan gaskets go on much as we remember because Fel-Pro still makes these affordable cork gaskets. Jeff applies a thin bead of gasket sealer along the pan rails and installs the gaskets. The Right Stuff is applied in the corners between the cork and rubber.

Summit Racing Equipment has been selling Moroso speed parts since its beginnings in 1968. We’ve opted for a simple Moroso street pan, which keeps oil centered on the pickup in all kinds of demanding conditions.

We’re going with a simple stock replacement harmonic damper from Summit Racing Equipment with timing tape to make sure we get ignition timing spot on.

The first intake manifold we tested was the single-plane Edelbrock Streetmaster intake from the early 1970s. The Streetmaster intake is designed for any of the spreadbore carburetors like the Rochester Quadrajet or Holley. You may also opt for an adapter that allows you to run a standard Holley-style square-flange carburetor.

We also tested the venerable Edelbrock C3B dual-plane intake manifold, which is very similar to the C4B, which is in high demand with enthusiasts looking for vintage speed parts. Although these manifolds are of very different approaches, they made the same kind of horsepower and torque, courting 400. Not bad for a 327 small-block.

We’re running stock stamped steel stock rockers on our retro 327. Back in the day we ran Ford small-block rockers to get that 1.6:1 ratio. Each valve is adjusted with the cam lobe at base circle with the valve closed. Valve lash adjustment with hydraulic lifters calls for tightening the nut until you can’t twirl the pushrod with your fingertips, then a quarter to a half turn tighter.

We’re running three new Holley carburetors because we didn’t see the point in searching for period Holley castings from the 1960s. We tested both the Streetmaster and the C3B with 600-, 650- and 750-cfm Holley carburetors with the 750-cfm delivering the best all-around performance. The 750 took us over 400 horsepower.

Before you is a vintage Delco single-point ignition with the PerTronix Ignitor module inside channeling the juice to Taylor ignition wires from Summit Racing Equipment.

Trick Flow announces new “Double-Hump” DHC 175 head castings in aluminum for the small-block Chevy. This is the legendary “Double Hump” iron head casting reborn in aluminum at Trick Flow is an even better head in A356-T61 aluminum.

Retail for the DHC 175 head casting is less than $800 per head, which is less than it would cost you to buy and restore an existing set of iron castings. What’s more, you get an even better head in the process with ductile iron valve seats, new stainless steel valves, better flow, and petite 60cc chambers.