We Upgrade a C2 Vette with an American Powertrain Driveshaft 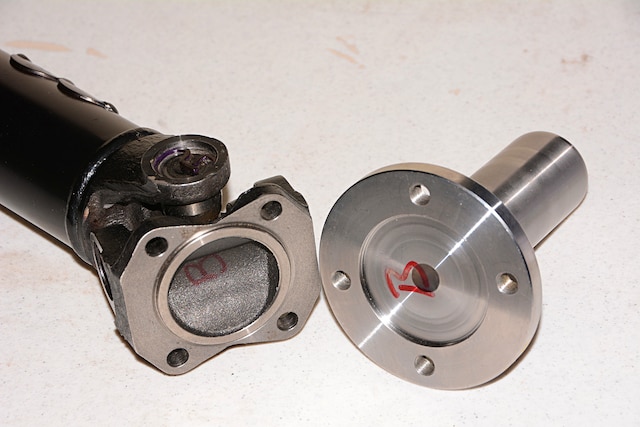 The driveline can be one of the most frustrating aspects of any build, whether you’re dealing with a stock restoration or a custom creation. Our 1964 Corvette coupe features a TREMEC TKO-600 five-speed manual transmission and has relied on a custom driveshaft for several years. After picking up some vibrations and unpleasant noises, we decided to rebuild the rearend, which required the removal of the custom driveshaft that was installed with the TREMEC transmission. Upon inspection of the U-joints, we found an issue. The U-joints simply didn’t fit tight enough into the transmission slip yoke, which could’ve been a source of vibration. Even with the U-bolts tightened, this tolerance could’ve thrown off the driveline balance.

In the midst of this dilemma, we contacted the driveline experts at American Powertrain to see if there was an acceptable tolerance when it comes to yokes and U-joints. The answer was a simple no, because the U-joint should fit tightly into the yoke. While a new yoke and U-joints would’ve likely fixed our problem, we liked the billet face flange yoke that American Powertrain includes with each of its Corvette driveshafts. It’s a patented yoke design that makes driveshaft installation super quick, and it’s a stronger design than the typical yoke with U-bolts. The driveline upgrade would also include a 2 1/2-inch DOM seamless steel driveshaft, replacing our older 2-inch-diameter driveshaft.

American Powertrain sells driveshafts for many makes and models, and each driveshaft is built to order. We filled out a brief form, and recorded two measurements: 1) the distance from the machined face at the rear of the transmission housing to the center of the rear U-joint carrier and 2) the width of the U-joints that are currently in use. After we sent in our measurements, a custom driveshaft was built and shipped to us. The car was on jackstands for a few weeks during the rearend rebuild, but when it was time to install the new driveshaft, it was simple and straightforward. Swapping the driveshaft took about two hours, but most of that time was spent removing the old driveshaft. The new flange style yoke simplified the process dramatically, and the super-strong construction gives us a lot more confidence during spirited driving. The new driveshaft, yoke and hardware was certainly a worthy upgrade for our TREMEC-equipped Corvette, and it could be the answer to your driveline drama. Vette

1. The custom 2-inch driveshaft in our 1964 Corvette coupe didn’t show any signs of damage, but we removed it as part of a rearend rebuild and later found some issues that necessitated a new driveshaft.

2. The existing driveshaft uses a conventional mounting setup with U-bolts at the pinion yoke. First, we loosen the 1/2-inch nuts and remove the rear U-bolts.

3. There isn’t a lot of room to operate beneath a C2 or C3 Corvette, and it gets even tighter when you have an aftermarket transmission. We loosen bolts that hold the U-joint straps in place, then slide the yoke into the transmission in order to remove the driveshaft. Some cars are easier than others, depending on the length of the driveshaft.

4. Now the standard slip yoke can come out of the transmission. It should slide out easily. One of the issues we were experiencing was excessive endplay where the U-joint fits into the yoke. This could cause vibration and eventually lead to parts failure.

5. To replicate the problem we were experiencing, we mocked up the old driveshaft and yoke on the workbench. Notice that this is a threaded slip yoke, whereas the original yoke would’ve used U-bolts and nuts instead of the steel straps and bolts.

6. With the U-joint seated into the old yoke, we are looking at 0.030-inch of tolerance. In a perfect world, the U-joint should be a snug fit into the yoke, so this opened the door for us to make an upgrade to our driveline.

7. Lucky for us, the guys at American Powertrain build transmission conversion kits for Corvettes on a regular basis, and they include a new driveshaft in every kit. To combat the original yoke design, American Powertrain came up with the billet face flange yoke, which is super strong and makes installation way easier.

8. American Powertrain typically doesn’t keep driveshafts on the shelf. They are custom-built to your specifications. In our case, we wanted a 2 1/2-inch-diameter steel driveshaft with 1310 (3.219 inch) solid U-joints. American Powertrain has a simple order form available that takes the guesswork out of measuring for the proper length.

9. The driveshaft order form tells us to measure from the machined face of the transmission housing to the center of the rear U-joint carrier. This came out to 26.75 inches, but yours may be different. American Powertrain will build our driveshaft from DOM seamless steel tubing, but they also offer aluminum and carbon-fiber units.

10. The billet face flange yoke slides directly into the TKO-600 transmission. It features a receiver groove for proper centering. A painted mark on the side of the yoke allows for easy alignment when installing the driveshaft.

11. The new 2 1/2-inch steel driveshaft can now be installed. We aim the rear portion of the driveshaft toward the pinion yoke, and then rotate it until the U-joints fit into the carrier. Before we install the rear U-bolts, we can do a dry fit on the front flange yoke to make sure our measurements came out right on the driveshaft.

12. We grabbed a new set of U-bolts, lock washers and nuts to use on the rear of the driveshaft. This is standard issue stuff that you can easily find on the shelf at your local parts store.

13. Space is limited at the rear of the driveshaft so you’ll need to rotate the rearend to reach all four nuts. Even then, there isn’t a lot of room to swing a wrench. We made sure these were snug but will retighten after the front of the driveshaft is attached and we can put the transmission in gear to keep the rearend from spinning freely.

14. Now, we can raise the front end of the driveshaft into place and slide the yoke out of the transmission until it fits into its receiver groove. Then, it’s a matter of aligning the bolt holes and bolting the flange together.

15. The American Powertrain driveshaft and flange-style yoke comes complete with fine-thread Grade 8 fasteners. We drop some blue Loctite on the threads for extra insurance.

16. Finally, the four 3/8-inch bolts can be tightened on the front end of the driveshaft. We can only reach a couple bolts at a time, so it’s handy to have a helper to put the transmission in gear for tightening, and then pop it into Neutral so you can spin it around to access the remaining bolts.