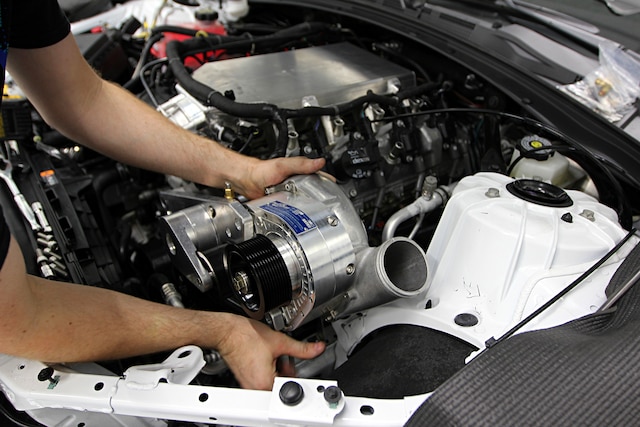 New Camaros, especially the top-shelf models such as the ZL1 are fast ... stupid fast. But, there’s a group of racers out there that need more brute power than the factory can offer. These racers are clawing at quarter-mile times that were once the realm of full-blown, gutted race cars. Justin Keith, known online as Stangkilr, is one of these racers. He already has a stupid fast, heavily modded C7 Corvette so when he picked up a 2017 Camaro ZL1 we knew it wouldn’t stay stock for long.

The blown LT4 in the ZL1 is rated at 640 horsepower and an equal amount of twist, but for what Justin wanted a simple pulley swap wasn’t in the cards. He was looking at crank output of over 1,000 hp. A serious power goal that would take some serious parts. So he called up the guys at ProCharger for some options. As ProCharger’s Erik Radzins told us, “The LT4 is one of the strongest OEM engines ever built and we love being able to feed them the massive amounts of supercharged air they deserve. In fact, every single LT1 and LT4 record at the track right now has been accomplished using our superchargers.” This love of boost is especially true of the 10-speed equipped versions, which are just begging for the torque curve of a centrifugal blower.

Now, in Justin’s case he was looking for four-digit power so he opted for ProCharger’s competition kit. Based around ProCharger’s big-power F-1A-94 blower, it’s a system with a proven 1,000+ hp capability. For more potential he also chose their air-to-water intercooler system over the easier to package air-to-air intercooler option. For this test he included a large methanol kit, not for its cooling properties but to help supplement the stock injectors, which would be maxed out for this round. Later, he will be running eight additional fuel injectors to help feed his 1,000hp aspirations. With the stock injectors, helped along by the meth kit, the ZL1 put down an astonishing 850 hp at the tires. Without doing any internal mods to the engine! When you factor in drivetrain loss you can see the Camaro is already close to the four-digit power goal. As the weather improves, Justin will be hooking up those injectors and sliding in a new camshaft before hitting the dragstrip. Once we get some quarter-mile times we will revisit this over-boosted Camaro.

First up is removing the air intake. Our car had an aftermarket version, but either way it needs be removed and set aside. The only part of this (or the factory intake) we’ll be reusing is the MAF sensor.

This will not be a step-by-step installation since ProCharger includes a full color, 54-page installation manual with the kit. Following those detailed instructions, we removed the nose from our 2017 Camaro ZL1. Typically, you’ll want to pull the front wheels, but since this Camaro is running drag skinnies we had room to work a ratchet.

After getting the rest of the required pieces off the front of the Camaro, we started removing the factory roots-style blower. First up was removing the top cover so we could access the bolts holding the blower to the LT4 engine.

Once those bolts were removed, and a few hoses disconnected, we could lift out the lower portion of the factory blower.

Several parts from the factory blower will be reused, including the throttle body, various sensors, and manifold gaskets.

The new ProCharger system uses an air-to-water intercooler (air-to-air is offered as well). Due to this, the factory’s auxiliary unit isn’t needed. After removing the driver-side headlight we removed the driver-side auxiliary heat exchanger.

We removed the cooling fan to gain better access to the crank pulley.

This gave us just enough room to pull the factory damper and pulley setup.

After transferring the factory intake gaskets, sensors, and throttle body to the new ProCharger sheetmetal intake we installed it onto the LT4 engine.

For the competition kit, the installation requires an SFI-certified ATI damper (PN 918856), which isn’t included. It was installed on the crank and the provided ProCharger blower pulley was bolted to it using 3/8-inch bolts along with red threadlocker.

After that it was time for the main bracket assembly. Hood clearance is tight so we made sure the bracket was as low as possible before tightening the four bolts.

Next was prepping the F-1A-94 blower by adding the included oil and installing a 90-degree drain fitting in the bottom of the unit. ProCharger superchargers are internally oiled so there’s no need to plumb them into the car’s oil pan.

Once the F-1A-94 was bolted in place we could re-install the factory accessory belts and the new 10-rib ProCharger belt.

Next to the intercooler unit we mounted the water reservoir to the passenger-side bumper mount location. The large tank will ensure plenty of cool water for the intercooler.

We then plumbed the two together along with the kit’s dedicated intercooler water pump. This did require some trimming of the lower air shroud.

Lastly, we installed the heat exchanger above the intercooler and water reservoir.

The first step in installing the 3-inch diameter air tubing was to slide on the section with the race bypass valve.

We could then start installing the rest of the air tube system following the routing guidelines in the manual. The key here was to keep all the connections loose until the whole system was together.

Once the last section was connected to the throttle body we could install the MAF sensor then go back and tighten up all of the previous connections.

At this point it was time to reassemble the front of our Camaro, starting with the driver-side headlight.

Here’s what the front of our air-to-water intercooled competition kit looked like before we hid most of it behind the Camaro’s nosepiece.

Once all the electrical connections, hose clamps, and brackets were double-checked we reinstalled the ZL1’s front nosepiece.

The system is pretty well hidden, but if you peek through the grille you can spot the new intercooler system and red bypass valve.

Under the hood we installed the system’s air intake. Space is tight and we had to slightly bend an A/C line down and out of the way.

Almost there. After installing the ProCharger decorative cover to the sheetmetal intake we had a few steps to prepare for an eventual fuel system upgrade. We also took this time to swap out the factory plugs for some colder heat range pieces (NGK 6510) per ProCharger’s recommendation.

The standard competition kit is good for some really big power, but this car is destined for even more. Given this, ProCharger added bungs to their intake to allow the use of eight additional fuel injectors to the mix. These will eventually be controlled by an aftermarket ECU, such as the one from Holley, but for this round they are just there to stop a rather large vacuum leak.

And just like that the install was done. Of course we just hit the major points here and while the installation is involved you should be able to knock it out in a day to a day and a half. Oh, we forgot to mention the ECU. When you start the build the ECU is removed and sent to ProCharger for reprograming. They in turn ship it right back to you all ready to run.

After hooking up the Camaro’s methanol kit we were ready to hit the dyno. The meth kit will let us hit bigger power numbers on the stock eight GM injectors.

And big numbers is what we got! How about 851 hp and 724 lb-ft of twist on 93-octane gas and a big hit of methanol? Yep, and that’s at the wheels from a blower and a meth kit without cracking open the engine! Right after we wrapped up this install, the owner plumbed in those eight extra injectors and added a cam, and sailed north of 1,000 crank horsepower! Once winter loosens its grip this reborn ZL1 will hit the track and we will see what sort of quarter-mile times it can lay down. Stay turned!