Intercooling an LS Engine With Nitrous for More Horsepower

I Got the Chills 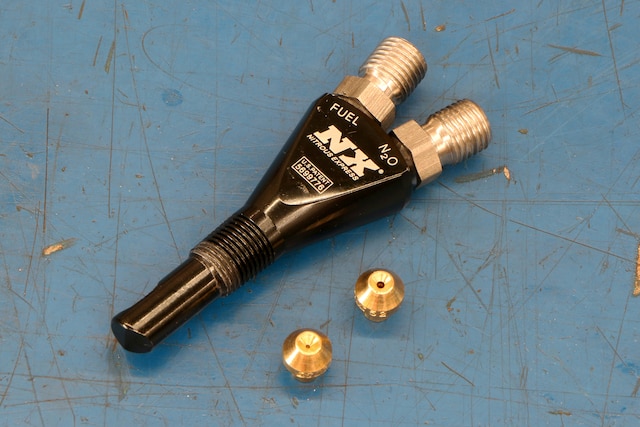 There is a war out there in LS land, and it’s being waged between the nitrous and turbo camps. If you follow the usual build pattern of most LS owners, the first modification is a camshaft and valvesprings. The right cam can add 50, 60, 70 horsepower or more to a typical LS combination. Even more importantly, the cam sets the stage for future modifications, including nitrous or boost. Add either one to a stock LS engine and it will perform well. Add either to a cammed LS and even better things happen. While nitrous oxide might take top honors in the bang-for-the-buck category, turbos are the more popular go-to power-adder for higher horsepower levels. Add the right turbo to a cammed LS and you can top out the flow limit of the turbo, meaning 800, 900, even 1,000 horsepower or more with one of them serious whizzy wheels. As good as nitrous and turbos work separately, we decided to see how well they perform together by using nitrous as the intercooler on a turbo LS.

Why on earth would we combine two power-adders with the potential energy of a turbo and nitrous? The answer is, as always, because we are looking for more power, but there is actually an even better reason: cooling. You see, while nitrous oxide is famous for improving the power output of any engine, it also provides significant charge cooling, just like your average air-to-air or air-to-water intercooler. The reason for this is that the boiling point (where the liquid nitrous turns to a gas) is a chilly -129 degrees. While we can’t hope to get the air intake temperature of our turbo engine down that low (unless we run straight nitrous), the introduction of even a small sample of nitrous at -129 degrees has a positive effect on charge cooling. How much, you ask? That’s what we’re here to find out.

To unlock the hidden cooling mysteries of nitrous oxide, we took Nitrous Express up on their offer to supply a wet fogger nozzle for testing. Using the nitrous kit, we were able to provide nitrous to a non-intercooled turbo LS engine. Along the way, we monitored the power output, the boost and backpressure, and the all-important change in inlet air temperature.

The turbo test engine was a famous one, having produced 1,543 hp at 29.2 psi for an episode of Engine Masters TV. Making this all the more impressive was the fact that the high-mileage Gen IV LY6 short-block was stone stock. The only exceptions being a regapping of the factory rings and adding ARP head studs. The stock bottom-end 6.0L was augmented with CNC-ported Trick Flow Specialties 225 heads, a stage 3 turbo cam from Brian Tooley Racing, and (for this test) a Dorman LS6 intake. Also present were 120-pound Holley injectors, an Accufab throttle body, and a single Lil John’s Motorsport Solutions (LJMS) BorgWarner S475 turbo. The turbo was fed by (of all things) a set of stock, cast-iron truck manifolds and custom Y-pipe. The 2.5-inch Y-pipe from JFAB was designed to accept an adapter to allow the installation of a variety of different turbo sizes. The T4 S475 from LJMS was capable of supporting somewhere near 1,000 hp, but for our non-intercooled turbo test, we ran it at a safely reduced boost level. Controlling the boost was a pair of Turbosmart Hyper-Gate45 wastegates. To ensure safety and allow us to run sufficient timing, we ran all of the testing on 118-octane Rockett Brand race fuel, though the 7.5-psi boost levels were certainly pump gas friendly.

The first order of business was to run the 6.0L turbo engine on the dyno without the nitrous in non-intercooled form. Dialing in the A/F ratio and timing curves was easy on the Holley HP management system, and in no time we had the turbo engine pumping out 723 hp at 6,800 rpm and 641 lb-ft of torque at 5,100 rpm. The boost curve produced by the S475 turbo hovered over 7.0 psi for most of the run, with a peak of 7.5 psi. We took the liberty of monitoring backpressure as well, and the peak backpressure reading checked in at 14.4 psi at a boost level of 7.4 psi (a ratio of 1.95:1). During the runs, the inlet air temps at 7.4 psi reached a peak of 176 degrees, with an ambient air temp of 78 degrees. After installation of the NX wet fogger nozzle in the discharge tube, we supplied jetting that should provide an extra 100 hp. Upon activation of the NX nitrous kit, the air temps dropped by over 50 degrees and power output jumped to 907 hp at 6,800 rpm and 882 lb-ft of torque at 5,500 rpm. The nitrous dropped the air temps, but increased the boost pressure, to a peak of 10.6 psi near the activation point, though this dropped to 9.4 psi near the power peak. The NX kit upped the power ante by 184 hp and dropped IATs by over 50 degrees. I guess chilling out this turbo stuff really works. CHP

Boost is perhaps the best thing that ever happened to the LS, but it gets even better when you add nitrous!

Our test engine was a stock, high-mileage LY6 short-block with increased ring gap. It was augmented with a set of Trick Flow Specialties 225 heads and BTR Stage 3 turbo cam. Run in naturally aspirated trim, the 6.0L produced 514 hp.

For this test, we installed a Dorman LS6 intake and Holley 120-pound injectors.

Feeding the Dorman intake was a 78mm Accufab throttle body.

For this turbo adventure, we relied on a set of 6.0L truck manifolds to feed our single turbo. The factory manifolds were reversed, but still offered perfect plug access and eliminated any concern for burning plug wires.

The Y-pipe joined together to a common 3-inch V-band designed to accept adapters for T4 and T6 turbos. Note the exhaust backpressure probe in the Y-pipe.

To properly control the boost, we relied on a pair of Turbosmart Gen-V Hyper-Gate45 wastegates. The open port next to the vacuum/boost reference line was for water cooling.

Turbosmart also provided one of their Race Port blow-off valves (BOV), though this one was the old design, and despite having seen plenty of years and runs, it still worked perfectly.

The turbo supplied boost to the intake manifold through this custom discharge tube. Note the inlet air temp sensor positioned in the tube to monitor the charge temperatures.

After running the baseline in non-intercooled form, we installed the wet fogger nozzle from Nitrous Express into the discharge tube.

Nitrous was fed to the fogger by the supplied 15-pound NX bottle.

Though we would not be taxing the flow rate of the Lightning 500 bottle valve with our 100hp shot, it is nice to know we had it handy for future testing.

To monitor the temperature drop offered by the NX kit, we repositioned the air intake sensor into the Dorman intake manifold.

Run with the Nitrous Express wet fogger nozzle equipped with 52/28 jetting, the power output of the turbo engine jumped from 723 hp to 907 hp and 882 lb-ft of torque. Along the way, the nitrous lowered the charge temp by over 50 degrees and increased the boost pressure by 2 psi at the power peak. The backpressure also increased by 2.5 psi.

Turbo 6.0L-Non IC vs. NX Nitrous (HP) What looked like a shot of nitrous added to a high-horsepower stroker engine was actually multiple power-adders on a 6.0L LS. By running 7.5 psi of (non-intercooled) boost on the modified 6.0L, we were able to produce 723 hp at 6,800 rpm. After installation of the wet fogger nozzle from Nitrous Express, the power output jumped to 907 hp at the same engine speed. There was actually more power left in the nitrous combo, as we ran the A/F mixture a tad rich on the bottle (10.8:1).

Turbo 6.0L Non IC vs. NX Nitrous (TQ) To better illustrate the power gains, we separated the HP and TQ curves. Since nitrous activation occurred near the 5,252-rpm crossover point for the HP and TQ, it made the graphs very busy. Just like the horsepower curves in the previous graph, the torque curves in this graph show just how effective the Nitrous Express nitrous system was on the turbo engine. The NX kit increased the peak torque output of our turbo 6.0L from 641 lb-ft to 882 lb-ft, with consistent gains through the rest of the curve.

Turbo 6.0L Non IC vs. NX Nitrous (Boost Pressure) This graph represents the boost-pressure curves generated during the two turbo runs. Run in non-intercooled form, the boost was pretty consistent, hovering above 7.0 psi for most of the run. After we activated the NX kit, the extra power offered by the nitrous increased the boost pressure up as high as 10.5 psi, but the pressure settled near 9.5 psi at the power peak.

Turbo 6.0L Non IC vs. NX Nitrous (Inlet Air Temps) The introduction of the nitrous oxide from the NX kit not only improved the power output substantially, but it also offered a sizable drop in intake air temps. After activation, the introduction of -129–degree nitrous oxide into the air stream dropped the IATs by over 50 degrees. Obviously a larger shot (more nitrous) would offer even lower air temps, to say nothing of substantial gains in power.