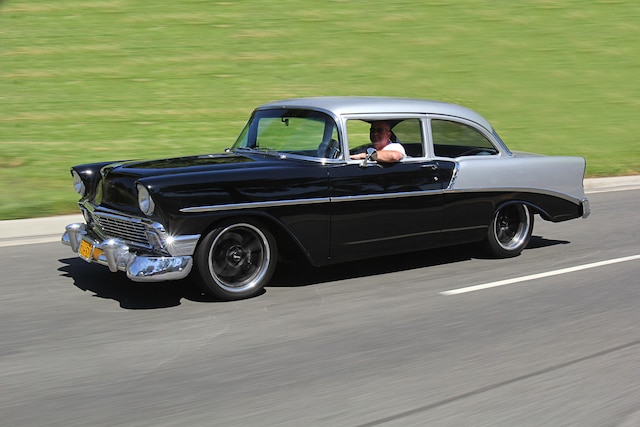 There was a time in the mid-’50s when serious small-block and W-motored big-block Chevys danced off the showroom floor with twin Carter WCFBs bolted to a 2x4 intake manifold. John Buck is a longtime enthusiast with a bitchin back-in-black ’56 Chevy powered by a carbureted Chevrolet Performance ZZ502 big-block crate engine. He’s always liked that 2x4 look and decided that the eight-barrel approach deserved a shot.

Buck’s ’56 Rat ran great with its 750-cfm double-pumper, but he was also searching for a little added sophistication. The plan focused on finding a 2x4 package that could achieve both goals. What Buck discovered is that FiTech offers just such a 2x4 EFI throttle body kit designed to bolt directly on an Edelbrock 2x4 low-rise manifold with minimal fuss.

FiTech offered to perform the swap at their shop in Riverside, California. This also required an aftermarket fuel tank to accommodate the necessary in-tank fuel pump assembly. This almost required as much effort as the intake manifold swap since this IRS-equipped Tri-Five was anything but stock out back, but the conversion went smoothly and very soon the ’56 hit the streets for some simple tuning. That’s when disaster struck. For reasons still not entirely clear, the 502 suffered a rod bearing failure that required a complete rebuild. Chevy 502s come with aluminum production rod and main bearings that sometimes are a bit unforgiving. If the crank hits a main bearing for whatever reason, the debris peeled from the mains usually end up in the rod bearings that then quickly fail. The project was delayed for several months while the engine went through a complete rebuild. Once the crank was massaged and the engine builder reassembled the 502 with most of its original parts, the swap could continue. The engine was initially run on a test stand with a single four-barrel carburetor to check for leaks and proper behavior before the 2x4 FiTech system was again installed.

Joel Rode’s Hot Rod Specialties shop in Upland, California, performed the new engine installation along with the FiTech system. With everything bolted in place, we met the ’56 at Westech Performance Group for a final rundown and tune on the chassis dyno. Because of some transmission issues they weren’t able to perform a full power run but, using the Superflow electric dyno, they were able to do some final highway cruise air/fuel ratio tuning by setting a given speed that allows the dyno operator to manipulate various throttle settings while maintaining a given speed. This is something only a load-based dyno like the Superflow can perform.

For initial EFI operation, FiTech recommends running the engine with its existing ignition system for ignition timing. Then, once the fuel side tuning has been finalized, then if the owner prefers, ignition control can be converted to the FiTech. This is a good plan because it minimizes the number of potential errors that could occur. That’s the next step for Buck’s ’56 but we just couldn’t wait so that will come later. No drama is anticipated.

The accompanying photo series is not a step-by-step install since this entire procedure required several days to complete. Part of this was a custom install on the fuel tank that had to work around the car’s IRS conversion. This installation occurred before FiTech finalized its own fuel tank system, which is now available. But that’s part of the fun and the challenge of working on modified cars. But the installation was a success and Buck’s ’56 is now back on the road. Check out how this FiTech conversion plan all came together. It’s a new digital take on an otherwise nostalgic story.

John Buck’s ’56 started out with this nicely done 502-equipped engine compartment fitted with a 750-cfm Holley double-pumper. Buck just wanted something with a little different look and a bit more refinement.

The swap began by unpacking this complete FiTech 2x4 GoEFI kit with the black finish to maintain the engine compartment theme. This was matched with a polished Edelbrock 2x4 low-rise intake manifold. But before they ripped into the engine compartment, there was an entirely new fuel delivery system to build.

It’s always best to completely disable the electrical system when working with fuel and electronics. The battery was located in the trunk, so a dedicated power lead and ground wire were fabricated to run all the way to the trunk using large gauge wire.

This project began before FiTech finalized its fuel tank lineup so this is a larger, stainless steel unit. The current system for the Tri-Five Chevys employs a more affordable stamped steel tank and the FiTech Hyper-Fuel in-tank pump. This particular pump is capable of 340 liters-per-hour, which is more than enough to supply fuel to the big-block.

This is the Hyper-Fuel module bolted in place. There is also a separate fuel level indicator assembly.

With the tank in place and new supply and return lines routed forward, the FiTech crew then began the disassembly process, removing the single four-barrel intake manifold and all the remaining gasket material from the heads and surrounding walls.

With fresh Edelbrock gaskets, the new polished 2x4 intake dropped right into place with a set of polished stainless ARP intake bolts. This was followed by dropping in a standard MSD ready-to-run distributor and plug wires.

Before dropping the new throttle bodies in place, the FiTech crew put the car up on the hoist and welded in a 14mm threaded bung that comes with the kit into the exhaust just downstream of the header collector. This adapter can be clamped in place with a gasket, but it’s better to permanently weld it and ensure there are no leaks.

With the FiTech eight-barrel system installed, the engine fired right away with some basic tuning parameters downloaded. You may notice that the vacuum advance canister is blocked in this photo. Later, it was connected to ported vacuum on the front throttle body to allow vacuum advance.

The next stop for the ’56 was Westech Performance where chassis dyno tuner Ishmael Candia first checked for WOT opening and then started the tuning.

The key to any engine’s proper performance is a combination of timing and fuel. Candia discovered the initial timing had been incorrectly set with the vacuum advance connected to the full-time manifold outlet, which put the timing way off at idle. He reset the initial at 18 degrees BTDC. The engine wanted more but that would have put the total beyond 36 degrees.

An odd thing occurred when at cruise. The rpm would occasionally spike very high for literally a microsecond. Candia said he’s seen this before and installed a shielded rpm sensor cable to help prevent its reoccurrence.

Here is the final assembly in the engine compartment minus the Edelbrock oval air cleaner—ready for the street.