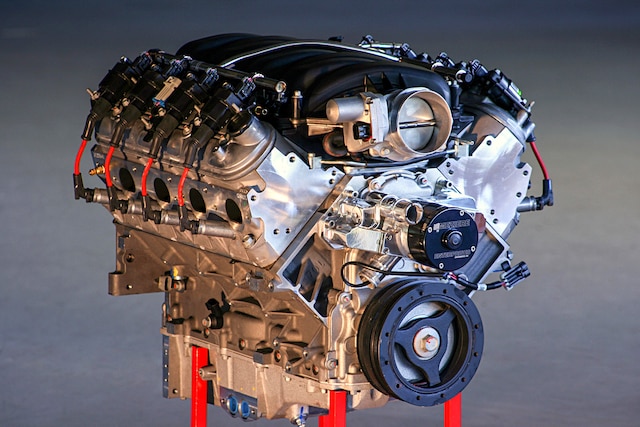 At first blush it sounds utterly unintuitive: Kneecapping the LS7, by trimming nearly 10 percent from its stroke, in order to build more horsepower.

Right. And buying an extended warranty at checkout is a smart idea.

Seriously, that’s what LS engine guru Brian Thomson has done to support the high-rpm needs of some enthusiasts who spend their track time on road courses rather than dragstrips—and it’s a fascinating look at engine theory and the priorities of power.

The first-generation Z/28 exemplified the theory of an oversquare engine designed to support high-rpm performance on the road course. Its DZ-code 302 small-block used 4.000-inch bores and a 3.000-inch stroke. And while the engine was rated at 290 hp at 5,800 rpm, it’s true output was believed to be beyond 300 hp, with 7,000-rpm capability. (General Motors photo.)

In a nutshell, Thomson swaps the LS7’s standard 4.000-inch-stroke crankshaft with a shorter, 3.625-inch crank, which brings the displacement down to 388 cubic inches, or 6.35 liters. With the right camshaft and stock-port LS7 heads, the combo easily cranks out more than 615 naturally aspirated horsepower.

“That’s no big deal,” you might think, when it’s easy to coax even more from a simple cam upgrade in a stock LS7. But the horsepower output isn’t the lone priority of this combination. In fact, it’s secondary to the sustained high-rpm performance required on road courses. That’s where engine theory and, more specifically, the implications of the bore/stroke ratio come into play.

When the ratio of the bore diameter to the piston stroke is equal, or 1:1, an engine is considered square. When the stroke length exceeds the bore diameter, the engine is undersquare. Conversely, when the bore diameter is greater than the stroke length, the engine is considered oversquare. Each configuration affects an engine’s performance in unique ways, with undersquare engines promoting more torque production (think of your classic 383 stroker small-block) and oversquare engines promoting greater high-rpm performance.

The foundation for the destroked LS7 is the aluminum 7.0L block that’s available from Chevrolet Performance (PN 19213580). It will be used with the LS7’s production-style dry-sump oiling system.

The shorter stroke minimizes the maximum piston speed, which reduces power-sapping friction and heat, while also reduces the stress on the crankshaft, which allows a higher maximum engine speed. By cutting the stroke and retaining the LS7’s 4.125-inch bores, it becomes an oversquare engine, with a 1.14:1 bore/stroke ratio (the stock LS7 is essentially square, with a 1.03:1 ratio) and an effective rpm limit of 8,000 rpm.

Chevrolet took the concept even further more than 50 years ago with the original Z/28’s 302 small-block, which used 4.000-inch bores and only a 3.000-inch stroke for a 1.33:1 ratio. It was designed for SCCA road racing, where quick revving and high-rpm capability were fundamental to performance. That’s exactly what Thomson is doing with the LS7, for exactly the same reasons and purpose.

And, yes, the LS3 engine, with 4.060-inch bores and a 3.600-inch stroke, comes close to matching Thomson’s combination, with a 1.12:1 bore/stroke ratio, but the displacement advantage of starting with the LS7 enhances power production—as do the deep-breathing LS7 cylinder heads.

The LS7 block comes out of the box with a higher level of machining than other blocks, including deck plate-honed cylinders. But because of the much higher rpm level this engine will live at, higher tolerances are a must. That means a trip to the line hone machine prior to the engine’s assembly and, yes, the cylinders will be touched for extra measure. An ounce of prevention and all that.

“We really wanted to take advantage of the tremendous airflow that comes with the LS7 heads,” says Thomson. “For the high-rpm range we’re aiming for they’re the best choice, by far.”

Further supporting the high-rpm capability of the engine are longer connecting rods. Like the engine combination itself, it sounds almost counterintuitive for an engine with a reduced stroke, but stretching the rod length 0.058-inch enhances the connecting rod ratio—the relationship between the rod length and stroke—to a strong 1.67:1 (the stock LS7 has a 1.51:1 rod ratio).

Put simply, the longer rods reduce overall friction by reducing the side-load of the pistons against the cylinder wall, allowing the engine to rev quicker. Additionally, the piston dwell time at Top Dead Center is increased for perhaps another degree of crankshaft rotation, which improves combustion efficiency and builds more power. If there’s a downside to a longer rod dimension, it’s that low-rpm vacuum production is somewhat diminished, but that’s not a concern at all for an “rpm engine” such as this, which will spend little time loping around at low rpm.

Oil squirters were added to the bottom of the cylinders. They’re not generally needed on naturally aspirated LS engines, but they offer durability and cooling benefits on an engine designed to spend most of its time spinning beyond 7,000 rpm.

“It’s not difficult to make 600 horsepower and run the engine up to 8,000 rpm,” says Thomson. “What we’re doing here, however, is building for sustained operation at high engine speeds. For that, we’ve leveraged every element to make it live there lap after lap and race after race.”

And while torque will never be this engine’s trump card, it ain’t all that bad, either. It peaked at 508 lb-ft at 5,800 rpm, while crossing the 400 lb-ft mark before 3,500 rpm. “It’s all about priorities; and for this application, torque wasn’t one of them,” says Thomson. “The horsepower at the upper end was what we were looking for and the engine delivered, big time.”

Along with high-rpm performance, this unique LS7-based combination demonstrates the vast versatility of the LS platform. No matter how you twist them, they’re going to make big power. CHP

The key to this engine combo is the 3.625-inch-stroke crankshaft, in this case an internally balanced Callies DragonSlayer 4340 forged piece, which is 9 percent shorter than the stock LS7’s 4.000-inch stroke. Additional benefits include smaller crankshaft counterweights, which reduces windage, along with reduced overall rotating mass, because the counterweights are closer to the crankshaft centerline.

The LS7 block’s original billet steel main caps were retained for this assembly, but their original bolts were replaced with ARP studs and nuts for greater clamping strength and accuracy.

A custom Comp Cams solid-roller camshaft was spec’d for the engine, featuring 0.670/0.671-inch lift and 293/301-degrees duration with 1.7:1-ratio rockers. The lobe separation angle is a relatively wide 115 degrees, which enables the intake valves to open and close later, and the exhaust valve to open earlier. That reduces overlap to support a broader, flatter torque curve and allow sustained horsepower at high rpm.

A set of Jesel solid roller lifters is used rather than zero-maintenance hydraulic lifters because the hydraulic lifters can be a high-rpm drawback via instability within the hydraulic mechanism at high engine speeds. At high rpm, undesirable flex, deflection, and insufficient valvespring control can occur regardless of the lifter type, but there is more precise control with a solid lifter.

Forged H-beam Oliver rods are 6.125 inches in length, making them a little longer than stock LS7 rods. That’s an optimal trait for a high-rpm engine, because it reduces the connecting rod angle, which reduces friction and puts less stress on the thrust surface of the piston during combustion.

With longer rods and a greater rod/stroke ratio, the wristpin location changes on the piston. Generally, this means the piston is a little shorter, with a reduced compression height, and it’s a little lighter, which further enhances the engine’s rev capability.

The forged pistons are from Diamond and feature a heat-reflecting ceramic coating on the head and a friction-reducing coating on the skirts. The domed center section helps pump up the compression to about 12:1.

It’s hard to beat the airflow capability of an out-of-the-box LS7 cylinder head. Enormous, straight-through ports lead to big, 2.200/1.610-inch valves held at a 12-degree angle (versus the 15-degree of most other LS engines). The intake ports measure 270 cc and the as-cast combustion chambers are 70 cc.

Although Thomson generally uses the factory LS7 rocker arms in most builds, the unique high-rpm nature of this engine required something more, so the heads were machined to accept a Jesel pedestal-mount rocker-arm system. The 1.7:1-ratio rockers are the lightweight Pro J2K models and the entire system is designed to minimize flex and deflection at high rpm. They work with a set of PAC Racing Springs dual-coil springs that have an installed load of about 220 pounds and an open load of 625 pounds.

For the purposes of dyno testing, a production water pump and accessory drive system were installed. They were replaced with a custom drive system and an electric water pump, per the customer’s direction, for the final assembly (as seen in the lead photo).

Next comes an off-the-shelf LS7 intake manifold assembly, Chevrolet Performance PN 12644568. It runs about $800 from Summit Racing and includes the fuel rail and throttle body.

The stock fuel rails and injectors, which are rated at 35-lb/hr, are sufficient for the performance range of this engine, so there was no need to change what came with the LS7 manifold assembly.

The same goes for the 90mm throttle body. It’s more than adequate for the air requirements of this engine combination.

Additionally, there was no need to seek out more expensive ignition components. Thomson finds factory coils support 1,000 horsepower and more, so that’s what was bolted to the valve covers, finishing off the installation.

On the dyno and blowing through LS7 exhaust manifolds, the engine revved easily past 8,000 rpm and delivered its peak 619 horsepower at 7,200 rpm and 508 lb-ft of torque at 5,800 rpm on 92-octane pump gas. It also sounded amazing, with a spine-tingling wail that has to be heard to fully appreciate.

Here’s the engine dressed for the track. And while it is intended for a race car, it is also a very streetable combination, as long as you don’t mind giving up a few low-rpm lb-ft of torque. The capability to rev to 8,000 rpm would make it an interesting street fighter, for sure.