Upgrading the Turbo 400 in Your Corvette

Building The Brute: Chevrolet’s Turbo-Hydramatic 400 is the toughest domestic automatic ever done 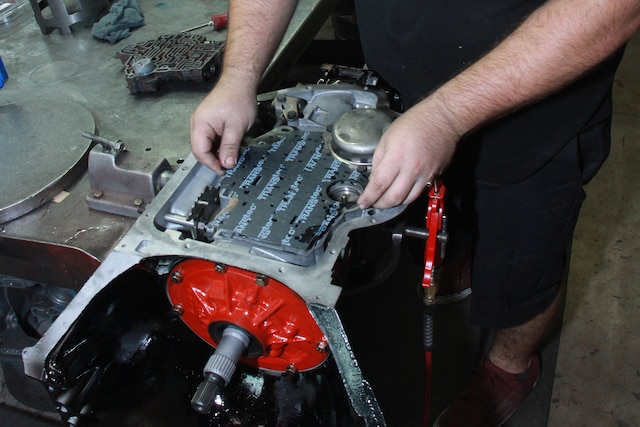 General Motors’ Hydramatic Division can take credit for having designed and produced the most rugged and dependable domestic automatic transmissions ever done. In fact, the Hydramatics are so darned dependable that Rolls-Royce has been installing them in its high-end luxury rides for the rich for decades. We don’t even know how many other applications around the world are fitted with Hydramatic transmissions.

The two-speed Powerglide transmission was GM’s mainstream automatic for ages. In the mid-1960s, GM developed two “next-generation” three-speed automatics. The Turbo-Hydramatic 400, or Turbo 400, for high-torque/high-horsepower engines was introduced in 1964 in GM brands such as Cadillac, Buick, Oldsmobile, and Pontiac. The Turbo 400 arrived in most Chevrolet vehicles in 1965 and in the Corvette in 1968. The light-duty Turbo-Hydramatic 350 three-speed automatic arrived in 1969.

These two Turbo-Hydramatic transmissions became the industry gold standard for every automatic out there. They performed reliably and flawlessly for decades before tougher fuel economy standards made them obsolete in the ’80s. The 700-R4, 4L60E and 4L80E overdrive automatics replaced these fiercely reliable transmissions. GM knew to adapt the proven gear trains from these two automatics into these high-tech overdrive automatics. The 4L60E employs the Turbo 350’s gear train. The 4L80E, as you might expect, copped the Turbo 400’s internals.

Right off the assembly line, the Turbo 400 is a rugged performer. It can withstand a tremendous amount of torque without breaking a sweat, which made it a logical choice for the all-new C3 Corvette in 1968. Prior to 1968, Corvettes got the two-speed Powerglide automatic transmission.

The Hughes Performance Turbo 400 is all about improving a proven performer. Hughes has plenty of experience with the Turbo 400. It has been building and upgrading them consistently since the company’s founding in 1971. All internal components are carefully inspected, with many of the original hard parts replaced with Hughes Performance components. Hughes replaces the original clutch discs with its special high-coefficient one-sided frictions for long life and greater durability. Kevlar bands have been installed in Hughes transmissions for over 15 years.

All hydraulic and valvebody circuits are carefully inspected and modified by Hughes Performance for cooler and quicker operation. Hughes has built countless numbers of Turbo 400 transmissions for a wide variety of vehicles and has earned an enviable reputation from racing to towing and all types of street performance, hot rods and custom applications. You can buy one off the shelf or you can send yours to Hughes for a complete rebuild any way you wish.

We turned our ’68 Corvette’s numbers-matching Turbo 400 transmission over to Hughes Performance’s capable technicians for a complete rebuild. They handed the transmission back to us in its natural finish and factory markings ready for installation. We did encounter one problem with our Turbo 400 case and that was a cracked bellhousing, which was repaired by Hot Rods by Dean before it went to Hughes.

The Turbo 400 transmission, more than 50 years after its inception, remains what is undoubtedly the toughest high-torque automatic ever produced. And, with Hughes’ resources and talents, it will remain in industry legend ready to take on the world. Vette

1. The rich architecture of the Turbo-Hydramatic 400 transmission demonstrates why GM spent a lot of time developing this automatic to begin with. The Turbo 400’s hard parts can withstand extraordinary amounts of horsepower and torque. In areas of the Turbo 400 where it could use a little help, Hughes installs key components to make them capable of withstanding greater sums of horsepower and torque.

3. The Turbo 400’s input shaft is an industry winner because it is a tough survivor in stock high-performance applications. Hughes can upgrade your Turbo 400 with a steel billet input shaft for greater torque capacity.

4. The Hughes Turbo 400 forward drum, rear planet, and intermediate shaft give this transmission greater torque capacity thanks to 4340 billet machined steel shaft (right). On the left is the stock input shaft. Can you see the difference?

6. A closer look at the 34- and 36-element sprags side-by-side. The sprag (roller clutch) on the left illustrates greater capacity via an increased number of rollers and greater width.

9. This is the Hughes steel billet input shaft for the Turbo 400, which has a spline count for the torque converter on one end and an increased number of splines for the modified forward drum. You’re not going to break this shaft.

14. Here’s another look at the intermediate shaft options for the Turbo 400. The stock intermediate shaft on the left is suitable for street/strip applications. On the right is the Hughes steel billet shaft when horsepower begins to ramp up to 600-1,000.

15. If you’re planning rough and tumble off-road, high-performance driving you need these Raybestos intermediate and direct clutches and plates.

16. A good rule to remember on clutch frictions is gray Raybestos clutches for off-road and red clutches for street and strip.

17. We’re building a street Turbo 400, which calls for red clutches and plates.

19. Although a lot of transmission builders grab planetary cores off the shelf, Hughes doesn’t do that. Hughes rebuilds its planetary cores as necessary using the parts shown here. We’re talking new pins, washers, bearings and gears. In short, new planetaries.

21. Servo pistons are what apply pressure to each of the friction bands. This is the reverse band servo piston, which gets new seals.

23. Hughes Performance goes through every single valvebody; machining and inspecting all surfaces before the valvebody is reassembled and installed. This is the Turbo 400 cast-iron valvebody.

25. The Turbo 400 governor, which operates based on vehicle speed (output shaft speed), works hand-in-hand with the vacuum modulator and kickdown to control shift points.

26. Here’s a Hughes Turbo 400 freshly completed and ready for the transmission dyno.

27. All Hughes Performance automatic transmissions are dyno-tested behind an engine and performance tested. This means the torque converter and front pump are primed and good to go. Pressures are tested. If the performance doesn’t measure up, the transmission is returned to the line and disassembled for inspection.

28. Our Turbo 400 had a cracked bellhousing, which Hot Rods by Dean managed to save by welding and return into service.

30. Hot Rods by Dean has mated the Turbo 400 to our 350ci small-block, and this union is ready for installation.

Corvette America shows us how they reproduce factory a C3 door panel for your Corvette.

Installing a solid state voltage regulator and new exterior lighting and wiring in a 1968 C3 Corvette.

Refurbishing the latching system and weather seals on a C3 T-top Corvette.

Corvette America shows us how they restore your C3 Corvette seat frames and tracks.

» Read More
How to Prepare a Car for Fresh Paint

We kill two birds with one stone: show you how to prepare a car for fresh paint, and get our '68 Corvette project ready for the spray booth.