Cleaning up the Engine Bay of a 1969 Chevy Nova

Zero To Hero!: Bring a dated and dirty engine bay back from the brink of disaster in a weekend 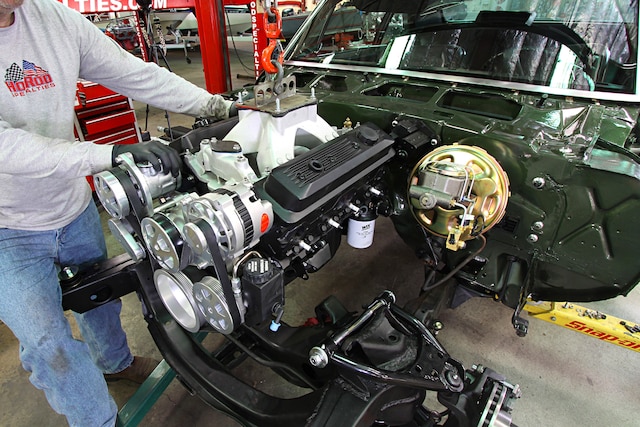 The Chevy Nova and Camaro have a lot in common. Well, sort of. The Chevy II/Nova started out as a humble, economical compact platform in 1962. It was a simple, affordable ride you could do a lot with and for not much money. By 1968, the Chevy II/Nova was more sophisticated with a new platform and a groovy bolt-on subframe shared with the all-new Camaro ponycar.

It is true that the Nova shares a lot of sheetmetal with the Camaro, though not always immediately apparent. What the Nova and the Camaro don’t have in common is numbers. There are more surviving Camaros than there are Novas today. This makes the Nova desirable as a dream project because not everyone has one. When they roll into a show or cruise they catch the eye. We like the wavy, slippery lines of the 1968-’74 Nova, and being they aren’t as pricy as a Camaro they are out there waiting for the savvy buyer.

Joel Rode of Hot Rod Specialties in Upland, California, picked up this ’69 Nova for a song, hauled it home, and went right to work on it. Because he bought it for chump change he had more room in his build budget than he would have if he bought a comparable ’69 Camaro.

Because the car spent most of its years near the ocean there were rust issues, which Joel took care of in his shop. With most of the bodywork handled, Joel decided it was time to do something about the ugly engine bay. The car was originally a six-cylinder Nova, as most of them were, but at some point had a small-block swap. A closer examination revealed a 350 with double-hump heads and aftermarket intake and a Holley carb.

Joel has removed the Nova’s front end sheetmetal for easier access and to show us what’s possible even on a tight budget.

1. Joel Rode of Hot Rod Specialties started with this ugly and dated engine bay, which was an I-6–to–V-8 conversion in need of a fresh appearance and better mechanicals. That long, flexible upper radiator hose is a hoot and the wiring is frightening.

2. We haven’t the faintest idea where this electric cooling fan came from. However, it needs to go, along with the zip-tie fasteners. AutoRad will help us with the radiator and fan combo.

3. Not only is newer, better wiring a matter of aesthetics it is also a matter of safety. Exposed wiring strung all over the place can be very unsafe and make a crispy critter out of your Nova in short order. We’re going to fix this with a wiring loom from American Autowire.

4. Joel has removed the Nova’s front end sheetmetal and prepped and painted it in a forest green metallic. Chevrolet thought of everything when designing these sporty compacts to be easy to service, as the wheelwells and fenders bolt on as a single unit.

5. Removing as many components as possible—especially the engine—makes it easier to do a professional job of detailing the engine bay. Joel took this thing down to the subframe and made everything like new again.

6. Energy Suspension provided us with new polyurethane subframe mounts, which will isolate engine and driveline harmonics as well as road noise.

7. Joel stripped the Nova’s 350 down and did a nice detail job on an engine that ran well but looked like hell. Beneath the SEM satin black paint is a suitable street engine with plenty of power on tap. If you’re restoring a driver, this makes a nice weekend job because it gets you back on the road by Monday.

8. Eddie Motorsports provided this complete serpentine drive system in billet aluminum. We like the compact nature of this system where nothing extends beyond the engine’s perimeter.

9. The ceramic-coated, long-tube headers from Doug’s Headers are a nice touch for this Nova’s engine compartment. They’re easy to install and the ceramic coating keeps destructive heat energy where it belongs.

10. The affordable Doug’s long-tubes are a perfect fit, dropping cleanly inside the framerails without interference issues. What’s more, they do a nice job of exhaust scavenging, which nets more power. These tubes give Joel’s Nova a nice throaty sound under acceleration.

11. Joel decided to take advantage of this engine bay update to also install an 800-cfm Holley carburetor and a tall, single-plane intake manifold.

12. Ignition comes from a fiercely reliable PerTronix billet street distributor with vacuum advance and the Ignitor III inside. The Ignitor III has all the advantages of the original Ignitor and Ignitor II, yet with a built-in rev-limiter.

13. The prepped and painted front fenders and wheelwells are carefully installed. It’s a good idea to protect front end sheetmetal with blankets or towels. No matter how careful you are, there’s always the risk of paint damage.

14. Eddie Motorsports billet aluminum fasteners make this front end pop. Don’t fully tighten the fasteners until you are sure about fitment.

15. Very few front ends go back together without shims to get things true. Joel carefully installs shims to where they will be out of sight and fitment will be just right.

16. You’ve got to love these billet hood hinges from Eddie Motorsports. They look terrific and they offer a mechanical advantage via this beautiful mechanical motion. Nitrogen-filled struts will provide the assistance, making hood opening and closing easier.

17. In front is a twin-fan, dual-row custom aluminum radiator from AutoRad. This is a really nice piece designed specifically for the 1968-’74 Nova. Joel has installed his own custom coolant recovery system using components from AutoRad. Joel tells us his 350 barely makes it to operating temperature even on the hottest of days.

18. Joel opted for these Eddie Motorsports valve covers for his 350 with the extra-added Hot Rod Specialties logo scribed mid-cover.

19. The Eddie Motorsports fasteners really make the ride because they are so uncommonly sharp. There’s a nice contrast between the fastener in black and the perimeter washer in billet aluminum. The billet aluminum hood bumper is fully adjustable and a nice accent.

20. The American Autowire engine compartment wiring loom yields safety and outstanding quality. It is a nice fit because it plugs right into factory connectors and switches.

21. Look at what you can accomplish over a weekend. Add in the Eddie Motorsports fender braces and we have good looks, safety, and durability in a cool, classic Nova. The Nova gives Joel a nice blend of a weekday cruiser and Saturday night drag racer.