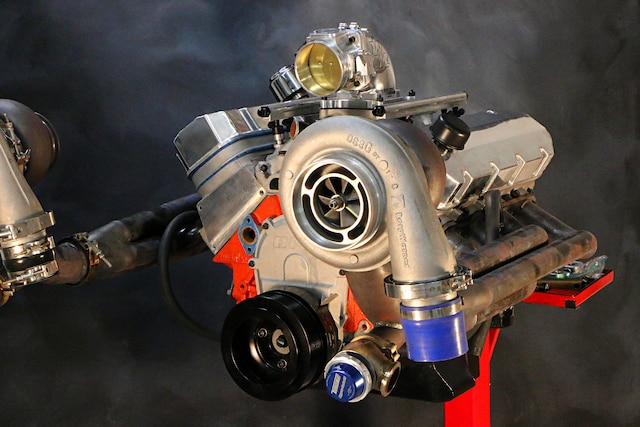 Having exceeded the 1,000hp mark with our BluePrint Engines (BPE) 540ci ProSeries Stroker Crate Engine using a ProCharger F-1A-94 supercharger, you might think we would be done with the big-block, but you’d be wrong. The boys at BPE were adamant about us putting the crate engine through its paces, so here we are again ready to subject the big Chevy to yet another power-adder. For those who are just joining the party, the BPE 540ci engine was shipped to us ready for action. According to BPE, the 540 was designed with boost and/or nitrous in mind, thanks to BPE’s own heavy-duty, four-bolt block filled to the brim with forged internals. They built the power-adder ready crate engine with the same components you would choose in your own boost build, such as a 4340 forged steel crank, forged H-beam rods, and matching forged aluminum pistons. To ensure the short-block made plenty of power, the 540 was equipped with rectangular port aluminum heads and a stout solid roller cam. The boost-friendly cam profile offered 0.652/0.652-inch lift, 255/262-degree duration, and 114-degree LSA.

In the first installment, we ran the 540 in naturally aspirated trim to the tune 649 hp. The first power-adder applied was a shot of nitrous using a Zex Perimeter Plate system. The Zex kit was plumbed with jetting to provide an additional 250 hp, which pushed the output of the BPE 540 to 937 hp and 891 lb-ft of torque. We followed up the Zex nitrous with a polished 6-71 supercharger kit from Speedmaster. Running a pulley combination that provided 11.1 psi, the supercharged 540 produced 939 hp and 866 lb-ft of torque. The final supercharged hurrah featured an intercooled, ProCharger F-1A-94 supercharger combined with fuel injection. That combination netted a peak of 1,197 hp at 11.8 psi of boost. The magical 1,000hp glass ceiling was officially shattered, but the BPE 540 was still standing tall and begging for more.

With our healthy BPE 540 crate engine at the ready, we decided it was high time to try turbocharging. And if one turbo is good, then two must be better, right? In preparation for the twin-turbo system we retained the Edelbrock 454-R intake previously run with the ProCharger supercharger. The Edelbrock intake had been converted for EFI use with eight injector bungs. This was combined with 120-pound Holley injectors and the 105mm throttle body and inlet elbow. To support the turbos, J-Fab whipped up a pair of tubular turbo manifolds and T4 turbo mounts. These manifolds and mounts allowed us to install the T4-based BorgWarner 475S turbos from Lil John’s Motorsport Solutions. For oil drain-back from the turbos it was necessary to tap into the oil pan. A pair of Turbosmart Hyper-Gate45 45mm wastegates controlled boost pressure, while pressure spikes were eliminated with a Race Port blow-off valve.

With boost production and control taken care of, it was time to deal with cooling. It is a law of physics that heat is an unfortunate byproduct of compression. This means that boost will heat the intake air temperature, and since heat is the enemy of both power and safety, every means should be employed to reduce unwanted heat buildup. To minimize detonation and improve power production we added an air-to-water intercooler, with CXRacing supplying the core and miscellaneous tubing. The intercooler featured a pair of high-flow cores, a pair of 3-inch inlets, and a single 3.5-inch outlet. Plumbing the turbos to run through the intercooler required only a couple of 90-degree aluminum bends and silicone couplers. We relied on dyno water to feed the intercooler, though additional power can be had with ice water. Tuning for our twin-turbo combination came from a Holley HP management system, and our fuel supply was augmented with a Kenne Bell Boost-A-Pump.

Using 112-octane race fuel we snuck up on boost and the tune, and the twin-turbo BPE 540 did not disappoint. Pump gas would certainly work at lower boost levels, but we wanted to maximize power production using the safety margin race fuel afforded. After dialing in the desired boost level with the Turbosmart manual boost controller, we were rewarded with a peak of 1,080 hp at 10.6 psi. Apparently the turbos and big-block were a match made in performance heaven! Cranking the boost up to 12.1 psi brought an increase in peak power to 1,128 hp and nearly 1,100 lb-ft of torque. The final run pushed the peak boost pressure up to 15.8 psi, where the twin-turbo BPE 540 thumped out an amazing 1,312 hp and 1,251 lb-ft of torque. Though there was plenty of power left in the BorgWarner turbos, we stopped there, satisfied that we had officially put the BPE 540 power-adder big-block through its paces. Imagine, a crate engine that—with almost any power-adder—can be made to exceed 1,000 hp and comes with a 30-month/50,000-mile warranty. A Mad Adder indeed!

Though Edelbrock offers an EFI version of the 454-R intake, we used this converted version Westech Performance had on hand for the twin-turbo EFI combination.

Knowing our twin-turbo big-block was going to push right past the 1,000hp mark, we stuffed the eight bungs with Holley 120-pound injectors.

J-Fab whipped up a set of dedicated turbo headers complete with V-band flanges.

The V-band flanges were set up to accept these J-bends. The bends featured a V-band flange on one side and a T4-turbo flange on the other. They also featured provisions for the Turbosmart wastegates.

Lil John’s Motorsport Solutions supplied a pair of BorgWarner 475S turbos for our big-block. Capable of exceeding 1,000 hp each, the turbos offered more than enough flow for our power needs.

Exhaust from the turbo exited through 4-inch stainless tubing using V-band flanges to the turbine side.

Since heat is the enemy of performance, we installed this air-to-water intercooler from CXRacing. The dual-core intercooler featured a pair of 3-inch inlets and a single 3.5-inch outlet.

We dialed in the air/fuel ratio and timing of the twin-turbo combination using a Holley HP management system.

Possibly the coolest part of the whole twin-turbo combination was this two-piece, CNC inlet elbow and 105mm throttle body combination from Wilson Manifolds.

To ensure adequate fuel delivery, we augmented the dyno fuel pump with a Kenne Bell Boost-A-Pump.

Mounted on the dyno, the 540 was fitted with an MSD billet distributor paired with a 6AL ignition box while an Aeromotive four-port pressure regulator controlled the fuel. For fuel, we went with 112-octane from Rockett Brand Racing Fuel.