How to swap reluctor wheels on your LS crank 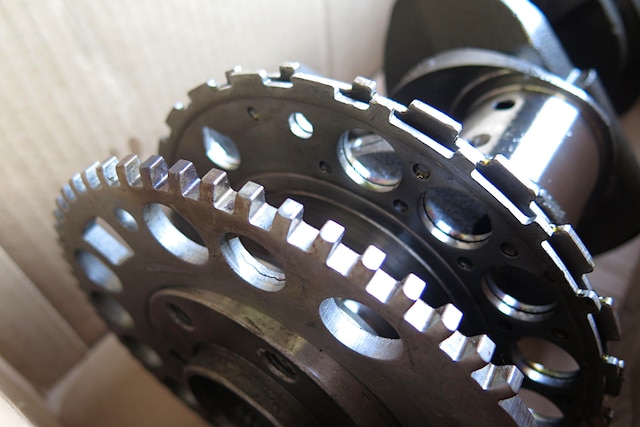 LS engines share a lot of similarities across the line, but they are roughly divided into Gen III and Gen IV versions. There are a few differences between these generations, but a key one that affects swapping one into your car is the reluctor wheel. Also referred to as a tone ring or timing wheel, the reluctor rides on the back of the crank and is read by a magnetic sensor located on the outside of the block near the starter. The magnet reads the teeth on the wheel and this gives the ECU accurate crankshaft position. The Gen III engines (LS1/LS6/LQ4, and early LS2) came with a 24x (24 tooth) reluctor wheel while the Gen IV engines (LS7/LS3/LS9, and later LS2) were fitted with a 58x wheel to give more precise crank position data to the ECU.

One easy way to tell which reluctor wheel you have is to look at the crankshaft sensor. If it’s black you have a 24x wheel; if the sensor is gray then you have a 58x wheel. Also, for the most part, 24x engines will have a camshaft sensor just behind the intake manifold while 58x engines typically have the cam sensor in the front timing cover.

So, why does all of this matter? Because the reluctor has to match up to your ECU if you want your engine to run. Some higher-end ECUs let you choose between 58x and 24x, but in most cases ECUs are programmed for a specific type. So, if you have an LS3 ECU then you need that 58x reluctor just like that older LS1 F-body computer will require a 24x wheel.

In our case we had an early (2005-’06) LS2 that had a front-mounted cam sensor and a 24x reluctor wheel on the crank. The problem is that we wanted to put it into a 2007 Trailblazer SS, which meant we needed the 58x wheel. The reluctor wheels on LS cranks are pressed on and there are a few tricks to getting the old one off and the new one on without causing any damage. That’s right, you can’t just hammer a new one onto your crank and call it a day. First off, the reluctor has to be properly indexed to the crank or your ECU will get inaccurate crank position info, which can cause a host of problems. Secondly, trying to cold press or hammer a cold reluctor onto the crank will most likely result in frustration and a damaged reluctor, especially in the case of the thinner, two-piece 24x wheel.

The key ingredient in this install recipe is heat. By heating the reluctor wheel it will expand just enough to easily slide onto the crank. As for having it indexed properly, the best method is to use a jig specifically designed to install the wheel perfectly every time. Now, we could have marked our crank based on the existing 24x wheel and got pretty damn close but we opted to do it the right way. Since we don’t own the required tool, and didn’t want to shell out $210 for one, we dropped by our friends at L&R Engines in Santa Fe Springs, California, to get the wheels swapped out. If you frequently mess with LS engines then buy the jig, but if this is a one-time deal then it’s worth paying a shop a few buck to do it the right way. So, let’s follow along with the proper way to swap the reluctor wheel on your LS crank.

1. Behold our factory LS crank replete with its 24x (24 tooth) reluctor wheel, also referred to as a tone ring or timing wheel. Before we can swap it to the newer style 58x reluctor we need to get it separated from the crank. The reluctor wheels are interference fit (about 0.007 inch) so the best way to get them on and off is with a little heat.

2. Removing the reluctor with a puller will just cause you frustration and most likely bend the wheel; this is especially true of the 24x versions. The best way is to use a torch to heat the area where the reluctor meets the crank to around 200 degrees. As the wheel expands from the heat it can easily be tapped off with a small hammer. 24x wheels are a two-piece deal with the two plates tack welded together. For this reason we don’t recommend reusing them since the heating process can weaken the welds. Besides, they are pretty cheap at around $20 (PN 12559353).

3. The reluctor wheel needs to precisely indexed to the crank. In theory, since our crank had a factory-installed reluctor in place we could have made some marks on the crank so that the 58x reluctor would be indexed the same as the 24x. But, this Reluctor Ring Installation Tool makes life a lot easier. It’s available from Goodson (PN RRJ-350) and other companies for around $200. Now, if you’re doing this just once that’s a bit pricey so you may want to try borrowing one or paying a shop like L&R Engines to do the task. Also, the same jig will install both 24x and 58x reluctor wheels.

4. On the inside of the jig’s ring there’s an internal guide pin that indexes to the 11mm blind dowel hole in the crank’s flywheel flange. For the purpose of this install, we will call that hole 12 o’clock.

5. And here’s our new 58x reluctor wheel (PN 12586768). The indexing hole on this part (red arrow) will end up at about 4 o’clock in relation to the indexing hole on the crank flange. Don’t try to eyeball it though, use the jig or at least the precise marks you made on the crank before removing the old reluctor. Also note the two holes with points, they should orientate at 3 and 9 o’clock. You can lightly chamber the entry hole on the reluctor and the edge of the crank’s flange to ease installation, but resist the urge to mess with the wheels ID since it needs to maintain the proper interference fit to stay in place on the crank.

6. The new 58x wheel is in place and indexed to the crank (at 12 o’clock) and the wheel at 4 o’clock. The tool is nice since there’s zero chance you’ll end up out of position, which would cause timing issues for your engine’s ECU.

7. Here you can see how the installation tool’s outer dowel indexes to the reluctor wheel’s 8mm hole.

8. We then started applying heat around the inner edge of the reluctor wheel. At around 450 F the reluctor wheel slips into place and less heat will mean it will just need a few persuasive taps of a hammer to move onto the crank. In theory you could cold-press the wheel onto the crank, but maintaining a square alignment is difficult and it’s easy to bend the ring or mess up the teeth. So, heat is the best way to go. If you don’t have a torch you could also heat the ring to temperature in an oven, just don’t forget the gloves.

9. Once heated up to temperature, a few light taps of the jig with a dead blow hammer was enough to seat the ring to the crank.

10. With the jig removed, we made sure the reluctor was firmly against the crank flange with a hammer and improvised energy transfer devise.

11. And just like that we were done. Once cooled, we installed the crank back in our LS engine and spun it to make sure the wheel cleared the back of the block and hadn’t become warped in the process.