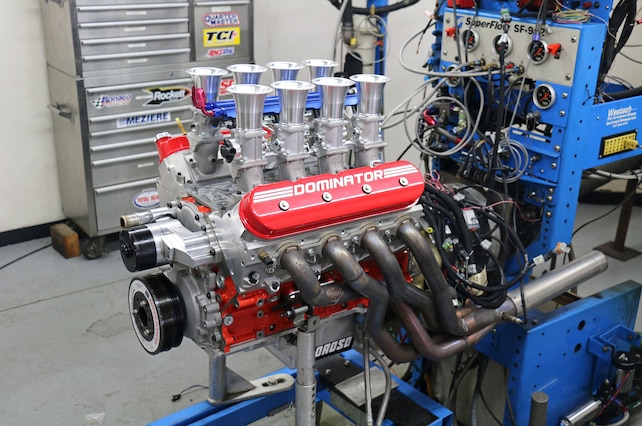 In the hierarchy of the LS engine family, one designation stands above the rest: LS7. We know the LS9 makes more power and (numerically speaking) was two better than the seven, but it took forced induction for Chevy to finally top what was likely the most powerful production engine to date. Certainly the most powerful small-block, the all-aluminum, dry-sump 427 even offered more power than the legendary big-blocks of yesteryear. In a battle of the 427s, we’d put the LS7 over the wild L88 and ZL-1 combinations any day. The question now is, as good as the LS7 is in stock trim, how do you make one even better? What if we told you there was a way to not only dramatically improve the performance of your LS7 (or any LS7-headed combination), but make a powerful visual statement to boot. Did we mention that said system was also affordably priced? Enter the Speedmaster individual-runner intake manifold.

As cool as any LS7-headed combination is, it can be argued that the factory composite intake manifolds don’t offer much in the way of a “wow” factor. Sure, they package nicely and even offer impressive power, but lift the hood to reveal plastic and all you hear are crickets. We understand everything the composite intakes have to offer: production costs, design flexibility, and even internal surface finish, but no one ever said “That’s the coolest intake I’ve ever seen,” after coming across a factory LS7 intake. By contrast, the individual-runner intake (Speedmaster offers both downdraft and sidedraft versions) screams performance. The Speedmaster downdraft system included a pair of intake manifolds, each designed to accept a quartet of 50mm throttle bodies fed by full-radiused air horns. Toss in a pair of billet fuel rails, center-pivot throttle linkage, and provisions for the MAP and TPS sensors, and you have one complete (and powerful) induction system. Based on surface area alone, the eight 50mm throttle bodies offer more than double the flow potential of the single 90mm throttle body on the LS7 intake.

Flow potential and visual statements are all well and good, but does it make real power? To find out, we set up a back-to-back dyno test against the factory LS7 intake on a 427 test engine. Code-named Magnificent 7 LSX, the 427 began with a GM LSX block from Gandrud Chevrolet stuffed with internals from CP, Carrillo, and Lunati. The 427 also features a Stage IV LS7 cam from Brian Tooley Racing, a set of Gen X 260 LS7 heads from Trick Flow, and a Moroso oiling system. Toss in some trick components like an ATI damper, Comp Cams front cover, and FAST injectors, and the LS7 was looking plenty magnificent. For test purposes, we installed the engine on the SuperFlow engine dyno at Westech Performance using a set of Hooker headers, Meziere electric water pump, and Holley 90mm (manual) throttle body. After dialing in the air/fuel and timing on the factory LS7 intake with our Holley HP EFI management system, the 427 produced peak numbers of 641 hp at 6,700 rpm and 571 lb-ft of torque at 5,200 rpm.

After running the stock LS7 intake, it was removed to make room for the Speedmaster individual-runner, downdraft system. The two intake sections were sealed to the TFS heads using a small dab of silicone, though we would like to see gaskets or receiver grooves to accept the factory O-rings. After installation of the eight individual throttle bodies, we spent some time to link the throttle bodies together to ensure they all opened and closed in unison. Each runner featured a vacuum provision to feed the MAP sensor, but we relied on signals from just two runners. Speedmaster supplied the necessary TPS adapter that allowed us to install the factory TPS onto the new throttle linkage. The intake kit also included a pair of billet fuel rails that required longer (than factory LS7) injectors, so we installed a set of 80 pounders from Accel.

After hooking up the center-pivot linkage to the throttle arms, we were in business. Once tuned, the new Speedmaster IR system satisfied our need for speed by increasing the power output of our Magnificent 7 LSX from 641 hp and 571 lb-ft to 673 hp and 605 lb-ft of torque. The new system not only looked great but also offered a substantial improvement in power through the entire rev range, so if you’ve got the need, this new downdraft system offers plenty of speed.

Not only did the Speedmaster individual-runner intake increase the peak power numbers, it improved the power output through the entire rev range. Offering more than just an impressive visual statement, the IR intake increased peak horsepower by 32 hp and peak torque by 34 lb-ft. More peak power is always welcome, but more power everywhere is the kind of intake swap dreams are made of.

01. You don’t have to look very far to find extra LS performance when you install this individual-runner, downdraft system from Speedmaster.

02. Our 427-inch, LS7-based test engine featured an LSX block (from Gandrud Chevrolet) stuffed to the gills with the best internals from Lunati, CP, and Carrillo. The LSX then received a BTR Stage IV LS7 cam and Comp lifters and front cover before being topped by a set of CNC-ported (six-bolt) LS7 heads from TFS.

03. Naturally secured by ARP hardware, this ATI Super Damper was on hand to ensure the LSX only generated good vibrations. Check out our sister book Super Chevy to see how we put the eight-rib ATI damper to good use with a ProCharger D-1SC and F-1A.

04. Exhaust chores for our intake test were handled by a set of 1 7/8-inch Hooker headers feeding 18-inch collector extensions.

05. Tuning both the stock and Speedmaster intakes was this Holley HP EFI management system.

06. For the first test, we installed the stock LS7 composite intake. Fitment and acceptable performance … yes. Excitement … not so much.

07. It was necessary to replace the factory drive-by-wire throttle body with a manual, 90mm unit from Holley.

08. Fuel for the Magnificent 7 LSX was supplied by a set of FAST 75-pound injectors. The proper height of the FAST injectors allowed us to utilize the factory fuel rail.

10. Now it was time address our need for speed with this Speedmaster downdraft intake.

11. Each port of the intake manifold featured a provision for a vacuum/MAP reference. Note also the adjustable linkage to sync each throttle body.

14. The downdraft system included billet fuel rails, mounts, and a crossover line (with fittings). The fuel rails were designed to accept these longer Accel 80-pound injectors.

15. Activating each set of four throttle bodies was this center-pivot linkage.

16. Off came the stock LS7 intake and on went the Speedmaster downdraft system. Nothing looks better than an LSX engine equipped with an IR intake.

17. Equipped with the Speedmaster intake, our Magnificent 7 LSX produced 673 hp at 6,700 rpm and 605 lb-ft of torque at 5,000 rpm. The IR intake increased power output through the entire rev range.

An Inside Look at the New Edelbrock AVS2 Carburetor