Going Pro: Our 6L LS crate engine cranks out an extra 300 hp thanks to 11.5 psi of boost from a ProCharger D-1SC 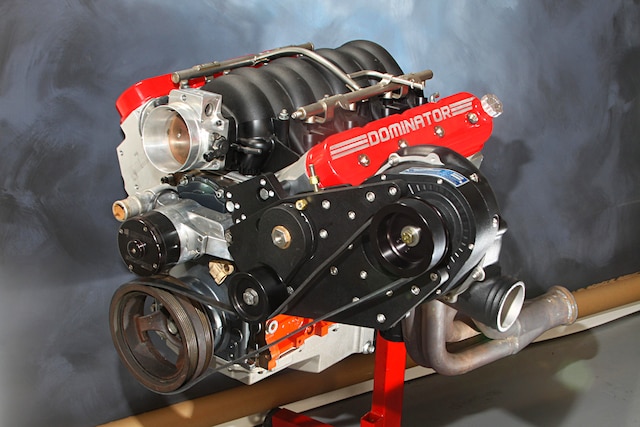 In the land of the LS, there are a great many ways to improve performance, including bolt-ons, boost, and the bottle; each has their merits. There has never been an engine family in history has responded better to a simple cam upgrade. Nitrous is always a quick and easy way to add 100-150 hp to even a stock LS. But when it comes to making serious power gains, nothing compares to boost. Even at moderate boost levels on a stock engine, it is possible to increase the power output by 40-50 percent. When you add boost to a powerful LS application you are talking about some pretty serious gains. It was with this in mind that we decided to apply boost from a ProCharger kit to a 6.0L crate engine from BluePrint Engines (BPE).

Loyal readers will remember the BPE 6.0L crate engine (GM 364LS) featured an iron 6.0L block, forged pistons, and BPE’s own LS3 heads. In the last installment, we swapped out the supplied (single-pattern) cam with a Comp unit and ran the combination with a Holley carb and intake. The dual-pattern Comp 277LRR cam featured a 0.614/0.624-inch lift split, a 227/243-degree duration split, and 113 degree LSA. The cam alone was worth a healthy chunk of change, but even after exceeding 500 hp with the carbureted combo we couldn’t help but want more. To get more, we decided what the BPE 6.0L needed most was boost. As luck would have it, the guys at ProCharger stepped up with a kit that included a powerful D-1SC supercharger and an efficient air-to-air intercooler. According to their website, the D-1SC is capable of supporting 925 hp, as much as 32 psi, and flowing a whopping 1,400 cfm. All of those numbers were well beyond what we had planned for the 6.0L, but know that when we ran the D-1SC on a larger, 427 LSX we exceeded the maximum horsepower number by a considerable amount. Look for that story soon, along with testing of their even more powerful F-1A-94, the most powerful 9-inch blower on the market!

In addition to the power potential, we had other reasons to like the ProCharger system, including fitment, ease of installation, and complete lack of belt slippage. There is nothing more frustrating than trying to run your supercharged combination while fighting belt slippage all day. Once installed and adjusted with the supplied tensioner, we never so much looked at the 8-rib serpentine belt. ProCharger supplied a number of different blower pulleys to go with their 7.40-inch crank pulley. The crank pulley was installed onto the awaiting ATI Super Damper using the supplied mounting hardware, but we started (and ended) with the largest blower pulley (meaning lowest boost) they offered. The 4.25-inch blower pulley combined with the crank pulley to produce a maximum of 11.5 psi. This boost was fed through the supplied air-to-air intercooler, which we kept cool with a large fan during testing. No fan can accurately duplicate the airflow that comes with a well-placed intercooler once a vehicle is at speed but the short run and efficient cooler kept air temps to a minimum.

Rather than run the 6.0L in carbureted trim again, we switched over to fuel injection. We replaced the Holley dual-plane intake and 950-cfm Ultra XP carb with a factory LS3 intake and FAST 75-pound injectors. The air/fuel and timing we controlled with a Holley HP EFI engine management system, while fuel was fed by an Aeromotive Eliminator fuel pump and regulator. Before hooking up the blower belt, we ran the fuel-injected 6.0L in naturally aspirated trim. Run with the LS3 intake and Hooker long-tube headers, the BPE 6.0L produced 515 hp at 6,500 rpm and 478 lb-ft of torque at 5,300 rpm. Before running the ProCharger, we made sure to fill the D-1SC with oil. Run in anger, the ProCharged BPE produced peak numbers of 824 hp at 6,300 rpm and 702 lb-ft of torque at 5,700 pm. Both the power and boost curves were still climbing at our shut-off point. We were only looking to exceed 800 hp with this combo and going Pro with the intercooled D-1SC made that look easy. That’s over 300 additional horsepower from our non-fancy crate engine that was still running GM head bolts!

5. After running the 6.0L naturally aspirated, it was time to install the ProCharger D-1SC supercharger. First up, we installed the adjustable mounting bracket to the driver-side cylinder head. Four (metric) bolts were used to secure the mount through the supplied spacer.

9. For all the belts to line up properly, ProCharger suggested this 7.425-inch damper from ATI Performance (PN 918853). The ATI units are great since they are SFI certified and good to go in all NHRA, IHRA, and even NASCAR.

10. ProCharger supplied a few different blower pulleys for our test, but we started with the largest one, a 4.25-inch pulley.

12. The ProCharger mounting bracket also featured this belt tensioner. The 8-rib system worked perfectly, never showing any signs of slippage. ProCharger does offer a cog system for those that really push the envelope, but according to ProCharger many racers are churning 1,300 hp with a serpentine belt without slippage.

13. The kit included this efficient air-to-air intercooler. Sized for the flow rate of the D-1SC, the cooler featured a 3-inch inlet and outlet. ProCharger also supplied the intercooler tubing and blow-off valve used for our test.

15. Run in anger on the dyno with the ProCharger D-1SC, the BPE 6.0L produced 824 hp and 702 lb-ft of torque. The power and boost curves were still climbing rapidly at our 6,300-rpm shut-off point. That’s a gain of over 300 hp, or if you prefer a 60 percent improvement in power output! There was a lot more left in the blower so we strapped it to a 427 LS engine built for higher power numbers, but that’s a story for another day. Stay tuned!

This is the kind of power curve dreams are made of. No slouch in naturally aspirated trim, the BPE 6.0L produced over 510 hp and 470 lb-ft of torque, but things got serious once we added the D-1SC from ProCharger. Running the largest blower pulley they supplied (meaning the lowest boost possible), the powerful D-1SC produced a peak of 11.5 psi, upping the peak power output to 824 hp and 702 lb-ft of torque. The curve is a strong indication that there was plenty more power to be had from this combination with increased engine speed, but reaching 824 hp easily exceeded our power goal for the 6.0L crate engine. ARP head bolts and bigger injectors could let us go for 900 hp. The only thing holding back the D-1SC was the engine, and we have a way to fix that for the next story.