QuadraFix! Getting GM’s most notorious (yet most legendary) four-barrel carburetor to perform 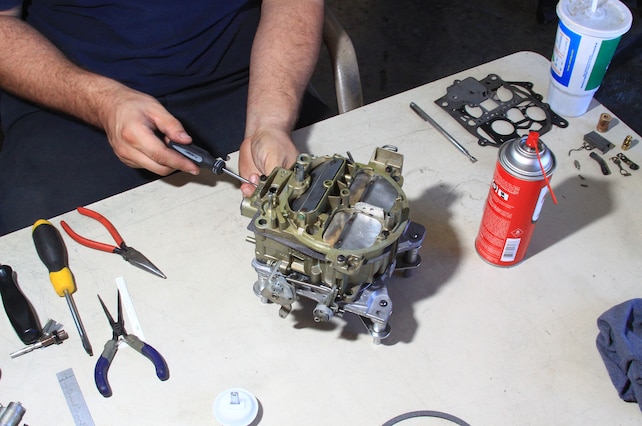 "Quadrabog," "Quadrajunk," and a host of other time proven nicknames define GM's most notorious four-barrel carburetor. Enthusiasts either love it or hate it. However, the Quadrajet is easily the most tunable spreadbore out there if you pay close attention to what makes this big-throat atomizer tick.

The Quadrajet four-barrel carburetor was produced by the Rochester Carburetor Division of General Motors from 1965-'90. It was produced in many forms, including electronic-control from 1980-'90, for a wide variety of GM applications. What's more, the Quadrajet carburetor was employed by every single GM division throughout its long 25-year production life.

In its most basic form the Quadrajet was produced as the "4MV" (automatic choke/manifold choke stove), "4MC" (automatic choke, integral choke heat coil, heat tube) and the "4M" (manual choke). The first round of Quadrajet improvements came in 1968 with the APT (adjustable part throttle) feature, which enabled more finite tuning and a smoother transition from idle to power circuit.

Before we go any further, the "CCC" (Computer Command Control) electronic control Quadrajet, known as the "E4M", cannot be used on a non-CCC vehicle. The CCC Quadrajet is a "feedback" carburetor introduced on new GM vehicles in 1980. Although the E4M sounds complex it's actually quite simple. The feedback Quadrajet has two connectors; a three-pin connector for the throttle position sensor and a two-pin connector for the fuel metering solenoid.

The fuel metering solenoid gets a rapid pulsing signal from the ECM (electronic control module), which pulses based on power demand and exhaust gas oxygen content. This is known as electronic mixture control. The objective is cleaner emissions and finite power tuning and fuel efficiency. The throttle position sensor provides throttle position feedback to the ECM. An O2 sensor in the exhaust monitors exhaust oxygen content. Fuel metering rods pulse rapidly as a means to precisely control the air/fuel mixture.

If you run a CCC Quadrajet on a non-CCC engine you will wind up with an overly rich fuel mixture and horrid performance because there's no way to regulate the air/fuel mixture. Fuel metering rods stay at full rich. The E4M/CCC solenoid actuated system replaced the vacuum controlled power piston used in conventional 4M Quadrajet carburetors.

Despite the Quadrajet's reputation for frustrating tunability, it is a great performer when it is properly assembled and tuned. Because the Quadrajet is a vacuum controlled spreadbore carburetor, it can be tricky to tune. Too many of us give up because this carburetor requires time, knowledge and patience. Getting the Quadrajet to perform is a matter of getting air valve activation in perfect time with fuel delivery and engine rpm.

One nice thing about the Quadrajet is fuel economy if you keep your foot out of it. Petite primary bores keep fuel consumption to a minimum. Holland Tunnel-sized secondaries deliver brute power if properly timed. Good for the interstate cruise. Convenient when it's time to pin the butterflies. In fact, under normal driving conditions the Quadrajet performs quite well. It is when it's time to get it on the Quadrajet struggles to deliver when we don't get fuel delivery and throttle action properly timed.

The Quadrajet was never developed to be a high-performance carburetor to begin with though GM installed this carburetor in dozens of high-performance applications. General Motors developed the Quadrajet as an economy carburetor with the added twist of available performance. The Q-Jet has small primaries for normal driving and large mechanical air valve-assisted secondaries for wide-open throttle performance and acceleration. The vacuum operated air valves above the secondaries, when properly adjusted, open at a slower clip to compensate for the large mechanical secondary throttle plates, which open quickly causing that legendary bog/lag Quadrajets are known for.

When you study the Quadrajet's architecture it's apparent it has nothing in common with Holley-based carburetor designs. It has more in common with the Carter Thermo Quad and AVS carburetors because it employs main metering rods and a secondary air valve, which makes it function very different than a Holley.

The Quadrajet has 1 3/32- or 1 7/32-inch primary throttle bores with either 750 or 800 cfm. It has been proven you can modify the Quadrajet to flow in excess of 1,000 cfm. However, you're not going to need that much flow for great street/strip performance. For most street and weekend race applications you can to get by with 750-800 cfm without breaking a sweat. And this has been proven in drag racing for decades.

When a Quadrajet is installed in a stock application it's operating in the environment it was designed for. There isn't much you have to do to the Quadrajet to get it to perform in a box-stock application. However, when you start making modifications such a hot roller camshaft, aftermarket induction and heads, and a host of other performance elements the Quadrajet struggles to keep up. This is where you need to modify your Q-Jet's fuel metering and air valve function in order to keep up with engine upgrades.

Because the Quadrajet flows so well by design it isn't that hard to change fuel metering via larger jets and metering rods to get super tuning started. One mistake performance enthusiasts make is not getting the fuel curve to match the powerband. Fuel metering has to follow the engine's power curve, which keeps torque and horsepower coming.

Because GM's Rochester Carburetor Division produced so many Quadrajets in 25 years there's still a generous inventory of cores out there to choose from. The trick is finding a good core you can build from. The downside to older Quadrajet cores is abuse and core shift. With core shift comes altered and closed off passages.

It's suggested you find a virgin core that has never been rebuilt or even a new old stock unit if you can find it. There are still Quadrajets in their factory packaging out there. Check eBay, Craigslist and Racing Junk websites for options. Swap meets are another excellent place to find a good core. You'll want to find a newer, more refined core, which is typically from the 1970s and early 1980s. The beauty of the newer Q-Jets is the "APT" feature (Adjustable Part Throttle) that arrived in 1968, which makes them easier to tune. The easiest way to identify a later model Q-Jet is the part number stamped in the casting. Older Quadrajet part numbers begin with 702 and 704. Newer castings begin with 170.

Another important issue with Quadrajets is carburetor sizing. Small-blocks through 350 ci are happiest with 750 cfm. Big-blocks want 800 cfm. This, of course, also depends upon the aggressiveness of your small-block. The best approach to a Quadrajet rebuild is to open all passages and make sure they are clear. Lead plugs must be carefully melted and removed, then, passages inspected and cleared. Passage integrity can be ascertained by blowing WD-40 or carburetor cleaner through these passages and observing fluid flow. Then, passages can be capped off with high-temp epoxy or lead.

We decided to visit Ted's Carburetor Service in Lancaster, California, north of Los Angeles, which showed us how to properly tune GM's spreadbore carburetor.

01. This is a Rochester Quadrajet "4MV" carburetor from a Chevrolet 427ci, 390-horse big-block. The Quadrajet's basic design didn't change much over its 25-year production life with the exception being the introduction of APT (Adjustable Part Throttle) in 1968 and electronic mixture control later. Fuel metering became electronically controlled in 1980.

02. Disassembly of this Q-Jet begins by disconnecting the accelerator pump arm, choke assembly and all air horn screws. A Quadrajet rebuild is actually quite simple. Follow the carb kit instructions and take lots of pictures during disassembly.

03. Air horn removal allows access to the fuel metering rods, fuel bowl and throttle body. The Quadrajet has mechanical secondaries, which open promptly when you mash the gas. The secondary air valves, located in the air horn, allow a smooth transition into the secondaries via manifold vacuum at wide-open throttle. This design is not unique to the Quadrajet. Carter did it with the Thermo Quad and AVS. Ford did it via the 4300/4300D/4350 carburetors. All employ air valve transition into the secondaries.

04. The float assembly is removed next. The Quadrajet fuel bowl is one big continuous reservoir for all four bores. Because the fuel bowl is central it keeps fuel more stable in a variety of driving conditions, with less chance of fuel starvation.

05. Ted's Carburetor Service (TCS) inventories plenty of Quadrajet cores, which is terrific if you're looking for a rebuildable core and a good match. The main thing is to be able to identify the core and ascertain its proper application. Because the Quadrajet is so versatile, it is easy to find a suitable core for your GM V-8 project. Did you know Ford ran the Quadrajet on its 1970-'71 429ci big-blocks?