How to Install a Set of Ultra-strong GForce Outlaw 1,500hp Axles in a 2013 Camaro

Stopping The Hop: Stronger axles can help your new Camaro survive the punishment of big power and hard launches 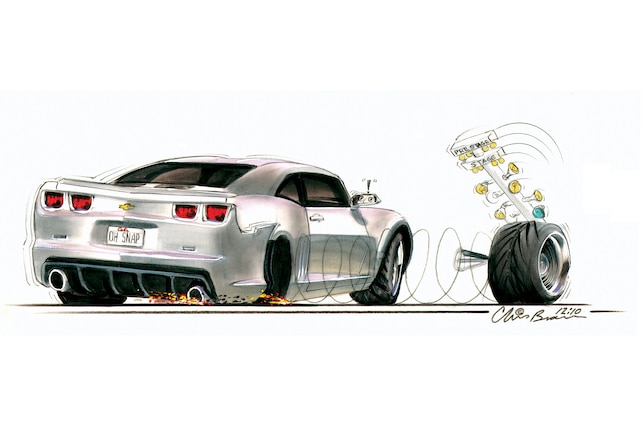 Adding horsepower to your new Camaro is the fastest way to expose a weak link. Now, blaming GM for a part breaking because you added more power just isn’t fair. After all, they built the Camaro’s drivetrain and other systems to hold up to the power output of a stock LS3 (or L99) and it’s not their fault that some of us feel the need to add hundreds of additional horsepower in a never ending quest to go faster.

One area that gets really abused is the rear axles. The 2010 Camaro employs an IRS system, and the axles just weren’t engineered to withstand repeated hard drag launches from the nearly 4,000 pound SS. Once axles started snapping in protest, the aftermarket stepped up with stronger axle assemblies. One such company, GForce Engineering, introduced two sets of axles for high-output fifth-gen Camaros. For rides churning out up to 1,500 hp, they offer their Outlaw axles, and for mere mortals, a slightly less robust (and less expensive) set made for up to 850 hp. Aside from the strength, the GForce axles are also designed to minimize wheelhop, which can cause all sorts of unfortunate breakage. As GForce’s Jesse Powell explained, “Knowing what wheelhop is and what causes it is the first step to understanding anti-wheelhop technology and the advantages it provides. ‘Anti-wheelhop’ is actually a technology developed by General Motors years ago on some of the first rear-wheel-drive IRS cars. The concept is simple, use a larger diameter axle bar on the side that is most likely to receive the most power first.

“Here is why it works. Wheelhop occurs due to a variety of reasons. Suspension, driveline, tires, power levels, etc., all play a part in wheelhop. But, at the most fundamental level, wheelhop occurs when the axle is ‘wound up’ (twisted). When the force of the axle trying to unwind exceeds the grip of the tire, it breaks loose and snaps back. Within an instant, the tire tries to grab and the axle winds up again and the process starts over again. This constant wind and unwind causes the tire to bounce and is what we call wheelhop.

“There are a variety of fixes for wheelhop. Stiffer suspension, different tires, and shock changes all help to ‘stick’ the tire. Another fix to help eliminate wheelhop is better axles. All GForce Engineering axles feature anti-wheelhop technology. Larger diameter axles, premium materials, and more strength and rigidity all reduce wheelhop. This, combined with the appropriately matched suspension, can virtually eliminate wheelhop and ensure your car hooks like you want it to.”

With axles in hand, we headed over to Don Lee Auto to do the swap. They had a customer that regularly abuses his fifth-gen on the track. Currently, his LS3 has a big cam upgrade, but his future plans call for some forced induction and lots of boost, so he opted for the stronger Outlaw axles. Of course, upgrading these axles will only serve to expose the next weak link in the powertrain chain, but he can cross that bridge when he gets there.

1. GForce offers two axle packages. The top tier, Outlaw, is made from a proprietary alloy similar 300m but with properties more favorable for superior strength in an automotive axle. The Outlaw axles feature CNC’d billet 31-spline CV internals, are priced at $1,699 a pair and are certified for up to 1,500 hp. While the other, 850HP, axles with 28-spline CVs are for Camaros making 850 hp or less. The 850HP axles run $1,199 for the pair and the main differences in the two is the spline count and diameter of the axle bars themselves and the CV materials used. Since future plans for our subject Camaro are for around 950 rwhp we decided to play it safe and go for the Outlaw axles.

2. Believe it or not, the axle is held in place by the pressure of the spindle pushing it in toward the differential. In short, it’s “captured” between the diff and the spindle.

3. The first step in removing the GM axles was to unbolt the caliper and hang it out of the way using some wire.

4. We then disconnected the ABS/Wheel Speed sensors.

5. We then removed the large nut that secured the axle to the hub.

6. The rear IRS upright assembly is secured to the car in four places: the toe rod, trailing arms, lower control arm, and upper control arm. Here, we unbolted the toe rod from the upright.

7. We then unbolted the upper control arm and trailing arm from the upright.

8. This allowed us to swing the assembly down and free the outer end of the stock axle. You could also disconnect the bottom and swing the spindle up.

9. Using a small pry bar, we popped the axle out of the differential.

10. And here is the left GForce axle next to its OEM counterpart. But this is about more than just strength. According to GForce, “GM developed the anti-wheelhop technology years ago and we have refined it to eliminate wheelhop with our axles. The left-hand axle is a regular diameter while the right-hand axle has an increased diameter. The design and material we use is what stops the wheelhop.” The real strength of the GForce Outlaw axles comes from the billet, CNC-machined CV internals. Traditional CVs in this size would use 28-spline axles and “CV stars.” In this case, GForce machines billet 31-spline stars and 31-spline axles. This provides tighter tolerances and less wear as well as additional strength from premium materials and more spline engagement.

11. One area where these axles gain a ton of strength is in the improved CV joints. The GForce units are custom-built in-house and utilize 300m or 4340 heavy-duty CV cages. They are then subjected to a special aerospace heat-treat process for added strength. The axles are also modular and the parts between the 850HP and Outlaw axles are interchangeable. This makes doing upgrades easy. If you happen to damage an inner stub it can be replaced for around $150 instead of having to buy an entire axle assembly. The 300m Outlaw axels carry a full lifetime warranty while the 850HP axles have a lifetime warranty on the bars and stubs and two years on the CV joints.

12. The new axle snapped into the differential as easily as the old one came out. The GForce axles come with a baked on black aerospace e-coat finish to protect them from the elements. We asked GForce for their thoughts on axle design to which they replied, “The strongest axle design is one that provides a constant twist for the entire length of the axle. We neck down the axle between the splines to give it a constant twisting rate the entire length. If you make the axle larger or the same size as the splined end then it concentrates all the twisting loads directly into the splined area and doesn’t allow it to properly twist. It would be much easier for us to make the axle the same diameter throughout, but this extra step results in a stronger piece.”

14. And just like that, the passenger side was done and we could repeat the process on the driver side. Installation for both sides took under an hour and the Camaro is ready for some serious power to be thrown at it.

2013 Camaro 1LE Puts Down 800 Supercharged Horsepower, All for Less Than the Cost of a ZL1

Some methods of hot rodding are smarter than others and Chris has earned a huge return—horsepower wise—using the money he saved by opting for a 2013 Camaro 1LE.

Add more than 100 rear-wheel horsepower to your LS3 with a Trick Flow top-end kit! Check out the install on a 5th gen Camaro SS to get more rwhp.

In Straight Line Spotlight, we're featuring the baddest drag racing Camaros, like Enrique Soto's '92 Camaro that he upgraded to a 532ci turbocharged mill.

Are your vinyl stripes getting dull? Learn how to replace your Camaro's vinyl rally stripes with seen-but-not-felt custom paint that's glossy and smooth!

Rick Bottom Designs’ XTC800 takes real-world show cars to the next level. Check out this 2013 Chevrolet Camaro Convertible that stunned the crowd at SEMA!

Video of Hennessey Performance's drag test of the HPE1000 turbo package for the Chevrolet Camaro ZL1.

I packed a ‘chute and grabbed a flight to Grand Rapids, Michigan where GM hosted a two-day launch of the 2013 Chevrolet Camaro 1LE and ZL1 Convertible.