Building a 577-RWHP LT1 Stroker for a Gen 6 Camaro 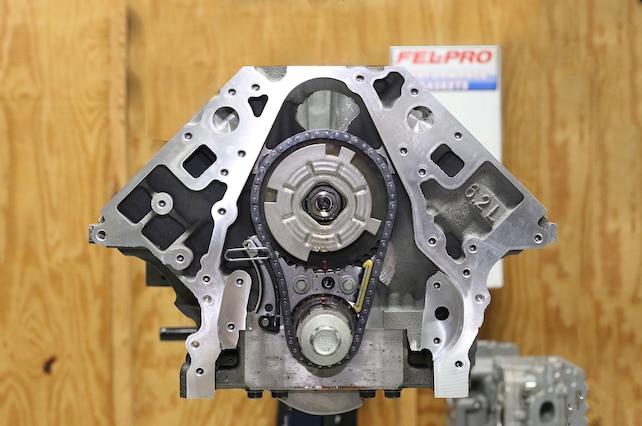 By now you may have seen one or two Gen V LT1 stroker combos, built to contain high boost applications. Redline Motorsports has done more than its share of those, including on its recently featured twin-turbo 427ci Gen6 Camaro. Well, this one is for the purists out there who only want the 14.7 psi that God gave you! When a customer requested a naturally aspirated LT1 stroker for his 2016 Camaro SS, Redline was happy to oblige. Built for the road course, the customer wanted something reliable and consistent but with more kick than the stock 376-cubic-inch displacement could afford. The answer was an all-motor, high-compression combo that used a Manley rotating assembly to achieve 416 cubic inches of punch, along with a healthy, custom-grind camshaft.

While in the past, making power with a stroker combo was largely about the cylinder heads. Redline’s philosophy with the new direct-injection engines is to focus on smaller details that pay larger dividends further down the road. The LT1’s high-flowing canted-valve heads were left largely untouched, aside from swapping the exhaust valves for one-piece stainless steel versions and performing a three-angle valve job. To make the most of the LT1 heads, Redline owner Howard Tanner worked directly with Billy Godbold at Comp Cams to develop a camshaft with significantly more advance (12 degrees total) than your average Gen V cam. In doing so, the Camaro would have more punch coming out of the corners and utilize the cam phaser to dial it back as it hit the upper rpms. The goal here is average power, not just peak. But to pull off this crazy cam timing and still keep 12.3:1 compression, Manley had to come up with a custom flat-top piston with deep valve reliefs. And last but not least, the Active Fuel Management system was eliminated with a Katech billet valley cover and GM race lifters. The 0.649-inch lift cam required Manley dual valvesprings, hardened pushrods, and a Comp rocker trunnion upgrade to complete the valvetrain.

Once the long-block was buttoned up, Redline installed the 416ci LT1 into the 2016 Camaro SS with a factory LT1 intake, American Racing Headers long-tubes, and a Borla exhaust. All that was left was for Redline’s owner and calibrator Howard Tanner to dial in the new combo on its in-house DYNOmite chassis dyno. The Gen6 went from 435 rwhp to 539! Peak torque jumped from 428 lb-ft to 507, while keeping a fairly flat curve. But wait! There’s more! The naturally aspirated combo was the perfect opportunity to test out MSD’s Atomic AirForce LT1 intake with a Katech 103mm billet throttle body. Surprisingly, the difference was huge! Peak power jumped to 577 hp and 526 lb-ft of torque while costing very little power down low. Follow the build below and check out the dyno sheet to see for yourself.

01. An aluminum LT4 block was the starting point of Redline’s naturally aspirated 416-cubic-inch stroker. Unlike other Gen V blocks, the LT4 has additional holes in the lifter valley to drain oil out of the valley. This helps keep oil from being drawn up through the PCV system and gunking up the valves (a larger threat on DI engines). Not wanting to leave anything on the table, the iron cylinders were finish honed to a 4.070-inch bore.

02. Due to the extended throw of the crankshaft, it was necessary to plug the piston oil squirters on the block so as not to cause an interference issue with the pistons. Getting the piston skirt shape just right to clear them can be tricky, and often requires some compromises in design.

04. Manley Performance supplied the forged rotating assembly, including this 4.000-inch stroke crankshaft. The Pro Series is made of 4340 that undergoes a multi-step heat treatment process and is also Nitrided for strength. It is then stress relieved, shot-peened, magnafluxed, micropolished, profiled, and gun drilled.

06. Roy places the crank onto the lubricated bearings.

08. Manley specially designed the 2618 alloy pistons for this build with a flat-top and extra-deep valve reliefs. To create a 12.3:1 compression, the “sugar scooper” was removed in favor of the more traditional piston shape. Manley 4340 forged, 6.125-inch H-beam connecting rods were assembled with the pistons and pins to complete the rotating assembly.

09. Here is a close-up of the more traditional flat-top design. Usually, direct-injection pistons have a unique bowl to catch the fuel, which is mainly for cold-start. However, through prior experience Redline has found it to be unnecessary on some builds. As it turns out, the extra-deep valve reliefs provided more than enough piston-to-valve clearance. Next time they can either go bigger on the cam or higher on the compression.

10. Using a ring compressor, Roy slides the fully assembled piston/rod assembly into the cylinder. You can see how the cylinder liners sit below the deck surface on the LT4 block. This promotes better sealing.

11. These Manley rods come standard with ARP bolts that clamp down on the crankshaft.

12. Though this is a naturally aspirated build, Redline chose the fuel lobe on the camshaft with +32 percent fuel flow as added insurance. It has a very similar triangular shape to the stock lobe, but with 7.5mm of lift. By increasing the number of throws and lift, Comp Cams can increase the fuel flow to the cam-driven fuel pump. The other lobes measure 232/252-degrees duration and 0.649-inch lift.

13. After lubing up the camshaft, Roy carefully slides it into the block.

14. Redline chose GM racing lifters rather than the factory lifters, devoid of the spring-loaded pieces for Active Fuel Management. This engine will not be shutting down any cylinders to conserve fuel thanks to these babies and a Katech valley cover. It is just as well because the AFM lifters have proven to be a liability in modified applications, and can seriously limit the cam specs.

16. Redline used the Comp Cams phaser limiter kit to complement the camshaft design. The cover on the phaser has to be removed to install the limiters similar to an L99 or L92 engine. Normally, the cam can swing 62 degrees, but these limiters hold it at 20 degrees max to prevent piston-to-valve clearance issues.

17. This bolt acts as a solenoid to control the flow of oil into the phaser, and ultimately how many degrees it advances or retards.

18. Since this is going into a Gen6 Camaro, Redline stuck with a factory LT1 wet-sump oil pump.

19. The factory LT1 head gaskets were sufficient as well, given that this was a naturally aspirated build.

20. While the runners were left untouched, Redline did replace the exhaust valves with stainless steel one-piece versions and gave the factory LT1 heads a three-angle valve job.

22. Roy placed the heads on top of the block, sandwiching the head gaskets, and then applied some ARP lube to the bolts and where the head of the bolt seats on the cylinder head. This allows for a nice even torque, for optimum sealing.

23. The LT1 uses the larger M12 cylinder head bolts, which is another great upgrade from the Gen IV.

25. After establishing a stout baseline of 539.3 hp and 507.9 lb-ft of torque with the factory LT1 intake manifold, Redline swapped on an MSD Atomic AirForce intake. It is a polymer-molded material like the factory uses, to resist head-soak and reduce weight, and was engineered using Computational Fluid Dynamics.

26. The MSD intake is a two-piece design that has three major benefits over the factory intake: a 103mm throttle bore, improved air distribution, and a direct flow path. The factory intake registered 94 kpa of manifold pressure, which meant there was definitely some meat on the bone.

27. This is a comparison of all three best runs: stock (435 hp) vs. 416ci with stock LT1 intake (539 hp) vs. 416ci with MSD intake (577 hp). The most apparent feature of all three graphs is a very flat torque curve thanks to the cam design. Interestingly enough, though the MSD intake improved peak power, it sacrificed nothing down low. Its lowest points are even with the stock LT1 intake and it really separates itself by 5,000 rpm. Manifold pressure moved up to 98 kpa in the process. When was the last time you remember adding 38 hp with an intake manifold?