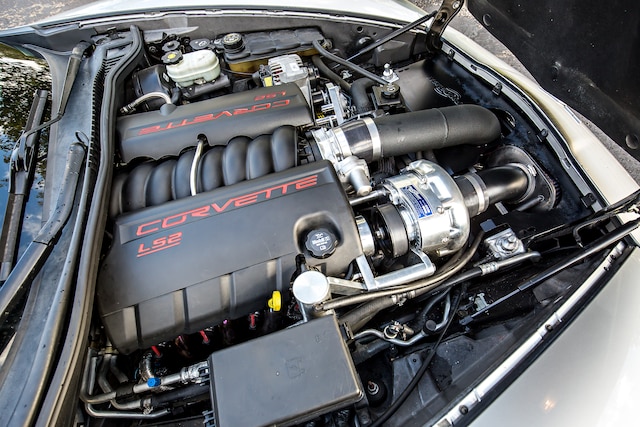 Ring lands beware; it is easier than ever to make boost with a ProCharger supercharger. With the many high-powered C6s running around, the folks at ProCharger were not content to let their customers fend for themselves when it came to upgrades to the base system. Last year, the Corvette C6 Stage II system was released to help up the ante with three key components: a high-flow supercharger inlet, direct drive system and a race intercooler upgrade.

Let’s take a look at each of these new parts, starting with supercharger inlet. On a full race application, you’d either leave the compressor completely open or use some sort of high-velocity stack to eliminate any restriction. But for street driving, you want to protect those compressor blades from dirt and debris with an air filter. The standard ProCharger air inlet fits great and works perfectly with lower boost levels, but by switching to a straight 4.00-inch inlet tube you can actually gain boost with the same pulley size. And as you switch pulleys, it allows you to make even more boost. Imagine sucking a milkshake through a 1-inch diameter straw versus a 1/4-inch. Just like the previous, the new air inlet uses a high-flow, reusable filter.

The race intercooler also follows the bigger is better motto, designed to accommodate over 1,000 horsepower. It uses a massive 4.5-inch thick core with tapered sheetmetal end tanks. The design is not only highly effective but reduces pressure drop as it is specifically designed to handle much greater airflow. The inlet and outlets are 3.5-inches, so it still fits the existing piping. ProCharger manufactures each one in the USA using a custom bar and plate core. The race intercooler debuted in 2014 and was added to this package.

The real star of the show is the direct drive system. Instead of using one belt to turn everything but the A/C compressor, ProCharger’s new setup puts the supercharger on a dedicated serpentine belt. Belt slip is the enemy of any supercharger system, which becomes more difficult to manage with smaller pulleys and larger superchargers. ProCharger says by decreasing the belt length by 40 percent, the belt has a much stronger grip. The new design uses a pulley to drive the accessories, which is turned by the A/C belt and has an OEM spring-loaded tensioner. An extra boss was machined into the bracket for better leverage when releasing it. The dedicated drive is available for the standard 6-rib blower drive belt and factory balancer as well as wider belts.

To demonstrate the installation and testing, we worked with Tom Izzo at Speed Inc., one of the authorities on forced-induction LS engines in the Midwest. The Schaumburg, Illinois, shop continues to churn out some impressive C6 builds thanks to some talented techs, one of the top LS tuners and Tom’s leadership. The car in question was a former magazine project car: a 2005 Corvette Z51 with long-tube headers, exhaust and a ProCharger D-1SC. The C6 had a custom LS3 MAF conversion and charge pipe as well as an ATI Performance 8-rib balancer and pulleys to deviate from the standard ProCharger kit. The engine was still a stock LS2 long-block, and while it originally functioned perfectly at 11 psi—lately belt slip and a few other issues had arisen. Speed Inc. and ProCharger were up to the task of getting her back in shape.

01. Our test subject is a former magazine project car: a 2005 Corvette with a Z51 package from the factory. Back in 2011, we installed an OS Giken Super Lock LSD and RPM Z06 diff to make it more suited to the road course and durable enough for the dragstrip. It then received long-tube headers and a ProCharger D-1SC supercharger kit to make roughly 570 rwhp on a Dynojet.

02. The ProCharger C6 kit was not exactly out of the box. It had been cranked up to 11 psi, and used a custom charge pipe to house an LS3 MAF. As you can tell from the green Gates belt, the standard C6 setup uses the same belt for all the accessories and the supercharger. Only the A/C compressor has its own dedicated belt.

03. If the supercharger pulley looks a little wider than normal that is because it has an ATI Performance 8-rib balancer and pulley kit. Despite the upgrade over the factory 6-rib, it had begun to have belt slip issues. Mind you, the owner is a die-hard road racer and not exactly light on the throttle. With a similar driving style or smaller pulley, you may encounter the very same problem.

04. Speed Inc. was not able to make a full dyno pull as the C6 drove into the shop. It appeared to be running out of fuel, which was a greater concern than what the owner described as high-rpm belt slip. An unhooked vacuum line on the fuel pump voltage booster appeared to be the culprit. Had this not been an issue, the baseline looks to have put the car in the ballpark of where it registered the last time it was on a Dynojet.

05. The full ProCharger Stage II kit looks like this, complete with race intercooler, direct drive system and supercharger inlet. All three easily allow the base kit to accommodate over 1,000 horsepower with the right head unit. The D-1SC is capable of 925 hp with 1,400 cfm of flow capacity, but you can expect even more benefits with the larger F-series blowers like the F-1A, F-1C, F-1R, and F-1X.

06. ProCharger uses a custom bar and plate intercooler design, which boasts an increased crossflow section, lowest pressure drop and highest flow. By using 3D computer models, an Aerodynamic test cell and real world testing, the design is tweaked until it performs without negatively affecting the rest of the car’s cooling system and aerodynamics. Another bonus, the intercoolers have stamped aluminum end tanks instead of cast to save weight.

07. To install the new intercooler, the front fascia must be removed (the hood does not). Thankfully the race intercooler uses all the same charge piping. After you remove the standard intercooler, it helps to loosen the cradle bolts and slide the intercooler brackets as far forward as possible. If you plan on installing an F-series blower, this is a good time to upgrade to the red Race bypass valve as well.

08. The standard intercooler is 27x6x3.5 inches, and the race version is nearly identical except it is 4.5-inches thick.

09. Moving on to the direct drive system, you can see the new belt routing. A dedicated 8-rib, 12-rib or cog belt can be used to drive the supercharger. The A/C still has its own belt, which also spins a pulley that the accessories belt rides on.

10. The alternator and power steering pump have to be removed to install the Stage II Idler Bracket Assembly and Stage II Tensioner Bracket Assembly. These two pieces do the majority of the work to convert from the standard drive setup to a direct drive. A laser alignment tool comes in handy to make sure the supercharger is shimmed properly and the other pulleys are installed correctly.

11. Last but not least, the 4.0-inch air inlet and filter are simply clamped to the supercharger.

12. Here is another look at the finished product, which still fits under the stock hood and has no fitment issues to speak of. These rather docile looking upgrades are enough to help this C6 hit 900 hp with engine and fuel system upgrades to match. Before heading to the dyno, Speed Inc. fixed the fuel pump booster and added an LS9 MAP sensor so that it could read the boost coming in.

13. Unfortunately, the stock LS2 was certainly not up to the task of making that much power. The air inlet removed any restriction and the direct drive took slack out of the system, so it added another 2 psi of boost (for 13 psi total at 6,400 rpm). Speed Inc. said this was more than they recommend on a stock bottom-end, so we called it quits with a safe tune that made 636 hp and 541 lb-ft of torque. It seems forged pistons and rods may be in this C6’s future.

Catch up on the rest:

If you’ve been following along with our daily driven 2005 Corvette project, then you’ll recall that we turned a formidable, mid 12-second stocker into a beast with help from the folks at ProCharger and Torq Speedlab.

We take our '05 C6 and make it our test subject on how to put a battery into the trunk as well as adding a wideband O2 to any car. We enlist Greg Lovell and Kyle Miller at AntiVenom for the assist. - GM High-Tech Performance Magazine