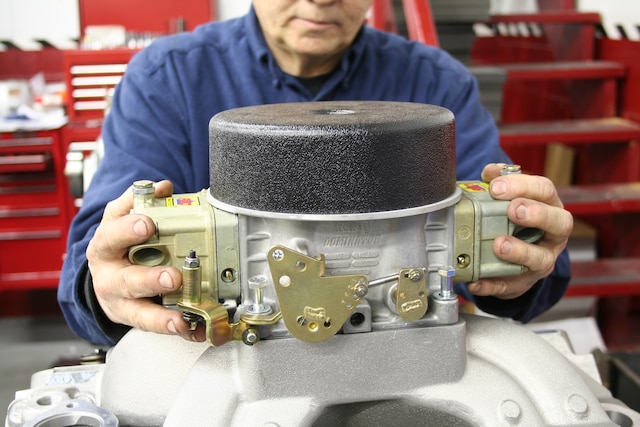 Regardless of the larger target of extracting big power from your engine build is the primary goal of building a well-tuned combination that provides strong performance across the rpm band. And as every magazine story, blog post, and YouTube video will tell you, no single component will provide the catalyst for perfect performance.

However, certain parts contribute greatly toward an engine’s overall operation. The camshaft is obviously one of the biggies and so is the carburetor. Generally, many home engine builders tend to go big on their carb choice, assuming they can “jet it down” during tuning to arrive at the perfect combination. That may work in some cases, but it’s not necessarily the most efficient or effective method.

But wait—there’s more! You’ll also need to multiply the result by the basic volumetric efficiency of the engine—the capability of it to process the air/fuel charge. For a stock-type engine, it’s 80 percent. For mildly modified engine, it’s around 85 percent, and for highly modified engines with high compression, it’s about 95 percent.

So, for that 355 engine, the 616-cfm rating translates to 493 real-world cfm on a stock combination; 524 cfm on a mildly built engine; and 585 cfm on a high-compression, high-performance combination. And because carburetors aren’t sold with such specific flow ratings, you’d select the closet model above that rating, such as a 600- or 650-cfm carb.

Sorry. We should have warned you math would be involved with this story.

Holley and Summit Racing have interactive carb selection calculators on their websites, which factor in the various volumetric efficiency options, while Edelbrock’s site offers a range of volumetric efficiency formulas. None, however, takes into account other factors such as the intake manifold—low-rise vs. high-rise or single-plane vs. dual-plane, the airflow capability of the cylinder heads, and whether there’s a power-adder involved. Heck, the weight of the car and even the axle gearing and torque converter stall speed can affect the optimal carb choice.

When it comes to a Holley carb, there’s also the question of vacuum-actuated or mechanical secondaries. For most street and street/strip engine combinations, you’ll want to go with vacuum secondaries for greater driveability. Mechanical-secondary carbs—the classic “double-pumper” design—should be reserved for truly high-performance combinations and, as Holley recommends, lighter vehicles with a curb weight of 3,100 pounds or less.

With Edelbrock’s carburetors, which are based on the classic Carter AFB design, they’re all of the mechanical-secondary type, so the only real choice after determining the appropriate cfm rating is whether you want an electric or manual choke. And you probably want an electric. The Edelbrock carburetors have a secondary air door, on Performer Series carbs they have a counterweighted, non-adjustable door below the secondary boosters, and the Thunder Series carbs have a secondary air door that is spring loaded and adjustable above the secondary boosters. It’s designed to accommodate lighter or heavier vehicles, to allow it to open early or late, with a simple adjustment on the spring.

With all the caveats regarding applications, we wanted to boil down the carburetor conundrum and took the easy way out: We enlisted experts Smitty Smith from Edelbrock and Blane Burnett from Holley for recommendations on the optimal carburetor choices for five theoretical engine builds, ranging from small-blocks to big-blocks and to the increasingly popular LS swap. We’ve assumed that all will be used with automatic transmissions.

Again, there could be differences depending on the vehicles the engines would go in, but their input provides a good, general overview for carb selections used mostly on the street and occasionally on the strip. Standard disclaimers apply: Your mileage may vary, ask your doctor before using heavy machinery, offer void in Tennessee, and so on.

On the street or strip, proper carburetor selection is essential for optimal performance. Besides the basic formula for determining the proper cfm requirement—(displacement x max rpm) ÷ 3,456—other factors include the degree to which the engine is built for high-performance (volumetric efficiency), the transmission, and even the weight of the vehicle.

Between the primary performance carburetor manufacturers Holley and Edelbrock, only Holley offers models with mechanical secondary circuits. They would be from the legendary Double Pumper range. Holley’s other carbs feature vacuum-actuated secondaries, which are recommended for all-around street use and moderate street/strip engines.

The basic Holley carburetor four-barrel family includes the smaller 4150 and 4160 series and the larger, 4500 series, commonly known as the Dominator. The 4150 series shown here is the more performance-oriented version of the smaller carbs, thanks to a secondary metering block with removable jets. The 4160-type’s secondary metering plate doesn’t have removable jets, but it can be converted to a 4150-type.

Edelbrock’s four-barrel carburetors are based on the classic Carter AFB, which also spawned the Quadrajet carburetor used on countless GM production models. They’re rated up to 800 cfm and contain a feature called adjustable valve secondary (AVS), which allows changing of the secondaries’ opening rate with the easy turning of a screw.

Although Holley and Edelbrock performance carburetors are delivered pretty much ready to run out of the box, some adjustments to the fuel curve may be required. Power valves and jets can be swapped in the Holleys (seen here), while in the Edelbrock carbs, metering rods with jets perform the same function. There is a wider array of tuning possibilities with the Holley carbs, but the Edelbrock design is generally easier to work with and make adjustments.

Forced-induction engines have unique carburetor requirements. In a naturally aspirated engine, the engine will drop to nearly zero vacuum under wide open throttle (WOT). That, in turn, opens the power valve to enrich the mixture. That’s not the case under boost and the result can be engine-destroying detonation, because the power valve circuit is closed and the engine leans out catastrophically. “Blower” carbs are modified to ensure positive pressure at WOT, eliminating the possibility of the power valve closing.

We start off with an entry-level buildup—one that countless enthusiasts embark on every year. Rebuilding the classic 350 on a budget, but aiming for more than the factory offered in a smog-strangled package from the 1970s or ’80s. With that in mind, our theoretical small-block would wear an aluminum dual-plane intake atop a set of breathed-on heads and a mild roller camshaft. Nothing exotic or pricey—just a straightforward, affordable combination for a second-gen Camaro, C10 or G-body.

Smitty Smith (Edelbrock): For an everyday driver small-block like this, a Performer Series 600-cfm carb is suggested—either PN 1405 with a manual choke or PN 1406 with an electric choke.

Stepping up the small-block ladder, this engine is a decidedly high-performance street engine based on the classic stroker combination. Because it would be used mostly on the street, with a few annual forays down the dragstrip, we’ll go with an open-plenum intake to optimize the street/strip capability. Ported aluminum heads and an aggressive roller camshaft with more than 0.525-inch lift and a comparatively wide lobe separation angle to complement its low-rpm torque capability with higher-rpm horsepower.

Burnett (Holley): Depending on a few other factors for the vehicle it’s going into, a 670-770-cfm Ultra Street Avenger carburetor would fit the bill. This would also be a good choice for Holley’s Terminator EFI system, which supports up to 600 horsepower.

Smith (Edelbrock): This would be a perfect combination for one of our Thunder Series 800-cfm carbs—PN 1812 for manual choke or PN 1813 for electric choke.

Similar to our basic 350 small-block, this would be a budget-minded, pump-gas big-block used almost exclusively on the street. It would use something like Chevrolet Performance’s affordable iron rectangular-port heads, with large 325cc intake runners, and one of their hydraulic roller camshafts delivering 211/230-degrees duration and 0.510/0.540-inch lift on a 112-degree LSA. With a single-plane intake, it would be a great, street-friendly tire turner for a truck, Chevelle, or early Monte Carlo.

Burnett (Holley): The classic 750 Double Pumper is the hands-down choice here. It was made for a combination like this—even if the vehicle is heavier than 3,100 pounds.

Smith (Edelbrock): One of Edelbrock’s Performer Series 800-cfm carbs is perfect for a mild big-block. Use PN 1412 for manual choke or PN 1413 for electric choke.

This is our Street Outlaws-wannabe big-block combo intended to be used with a supercharger or turbo system. We’re not talking about the baddest of the bad, money-is-no-object assembly here, but a purpose-built, track-oriented combo with big heads, a big cam, and a valvetrain that will handle boost-generated forays into high rpm. The thought here is 10- or even 9-second e.t.’s in the right vehicle, with some limited street time for cruise nights, etc.

Smith (Edelbrock): To be honest, this combination would probably exceed Edelbrock’s carburetor range, but on a 572 big-block that uses a tall-deck (10.2-inch) block, I’d suggest our Super Victor intake manifold PN 2927 with, say, a 4500-series carburetor and the power-adder of your choice.

LS engine swaps continue to gain popularity and for good reason. The LS family is compact and lightweight and the factory cylinder heads offer exceptional airflow capability that translates into big horsepower. With the right camshaft, a naturally aspirated 6.2-liter LS3 will zip past the 500hp mark with one connecting rod tied behind its back. Our theoretical combination would be simple: A stock bottom end, a Comp Cams XFI camshaft with 0.566/0.576-inch lift and a 113-degree LSA, and that’s about it.

Smith (Edelbrock): Edelbrock’s Thunder Series 800-cfm carb—PN 1812 for manual choke or PN 1813 for electric choke—is the way to go. Additionally, our E-Street EFI system is a great alternative to a carb here. It will support up to 600 horsepower.