How to Install a Custom Cam in a 5th-Gen Camaro

Custom Ground: What a Custom Cam Can Bring to the Table for your LS 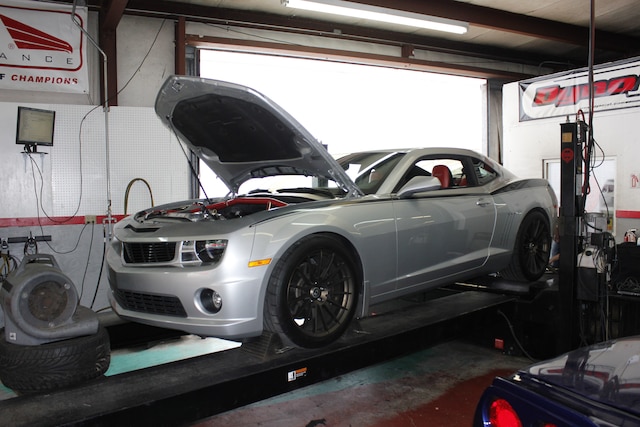 The current muscle car wars are nothing short of incredible. Not only do Detroit’s latest-and-greatest performance cars make boatloads of power, they are better handling and more comfortable than anything available in the ’60s or ’70s. Isn’t technology great?

Keith Kanyuh of Plant City, Florida, is an avid fifth-gen Camaro enthusiast. Keith’s 2010 Camaro is heavily modified and truly embodies the culture and history of the Camaro nameplate. The majority of the aftermarket parts on Keith’s Camaro, however, were aesthetic or suspension based. That being said, Keith wanted the aggressive sound you can only get from an aftermarket camshaft. He had all the looks, he just needed the rumble!

“With just bolt-ons, the car’s performance was ‘sufficiently boring’ for a daily driven street car,” Keith said. “Compared to most, the car would probably outperform a majority of the other daily drivers on the road. I should have been happy with that, but of course, I wasn’t. The exhaust gave the car a nice deep tone, but not the rumble I was after.”

To remedy the situation, he reached out to Summit Racing who set him up with a slew of parts from Crane Cams. After some back and forth on the combo, his wants and needs, etc., he decided to go with a custom-ground camshaft for the perfect blend of performance, sound, and driveability. Along with the camshaft, Keith also ordered valvesprings, retainers, locks, valveguide seals, and a trunnion upgrade for the rocker arms. Crane also sent one of its double-roller timing chains for the LS3.

Throughout the planning process, one of Keith’s requirements was the car needed to retain as much driveability as possible. This made the cam profile very important. Crane came back with specs that weren’t overly big, but would make significant gains while adding impressive sound. Lift numbers checked in at 0.590/0.590-inch, while duration was 218/236 degrees at 0.050-inch lift.

“We catalog proven grinds that are suitable for most general, and many specific, usages, but some folks like the comfort factor of a grind being created for their vehicle,” explains Chase Knight, of Crane Cams.

“Although our catalog lists over 50 different grinds for the LS engine families, we will certainly produce custom grinds for particular applications. We do this every day, so it’s nothing out of the ordinary. It’s all about assembling a combination of coordinated parts to achieve a goal. Whether that goal is maximum horsepower, increased fuel economy, specific idle vacuum, best torque in a given rpm range, etc., the overall combination of the engine and vehicle has to be matched for that specific application.

“All of these facets involved, along with the customer’s expectations, are taken into consideration, enabling us to formulate a proper camshaft. There are some folks that do not have well thought out combinations, so we’ll need to recommend what components may need to be changed to provide a viable setup. There are no magical camshafts that can produce superior results from an unrealistic group of parts. Also, you could have two folks with virtually identical vehicles, but one wants a smooth idle, while the other wants a rough idle: different cam needed. The nominal altitude where the engine is being used must be considered, as a different cam would be required in Denver versus the same car in Los Angeles. There are lots of variables.”

Aside from cam selection, tuning was an extremely large part of the success or failure of this endeavor. “With today’s fuel injected engines, idle quality and ‘sound’ can be an issue if the stock ECM is being used. Aftermarket computers may be needed to compensate for the vacuum changes that may need to occur to meet the customer’s criteria,” Knight explains.

For tuning, Keith brought in Phil Aprea of Tampa Tuning. Keith’s Camaro was brought to 360 Customs in Brandon, Florida, where it was strapped to the company’s Dynojet chassis dyno. Initially, the car laid down 406 horsepower and 410 lb-ft of torque to the rear wheels (these numbers were recorded at a different dyno session).

With all the new parts installed, and after tuning, Keith’s Camaro spun the rollers to 456 rear-wheel horsepower and 423 lb-ft of torque, for a peak gain of 50 rear-wheel horsepower and 13 lb-ft of torque. The camshaft and valvetrain upgrades, combined with the extensive tuning, left Keith with great power and even better driveability. Aprea went into detail on some of the changes made to Keith’s Camaro.

Aprea made other changes to the tune that contributed to the driveability of the car.

“Idle was raised 200 rpm, bringing it to 750 rpm,” he said. “One to five grams of air were added to maintain idle and prevent the Camaro from stalling with the A/C on. I calibrated the Camaro with the A/C on because that’s the environment we live in. We targeted 12.60 air/fuel ratio at wide open throttle, which the Camaro maintained after calibrating the MAF and reaching .91 grams cylinder air.

“We dialed in the Camaro’s low end three times to make sure it had quality driveability. That’s the most important strategy to apply on these cars, and the hardest to obtain. But we drive the cars more at cruising and part throttle in traffic than we do at wide-open throttle. Wide-open throttle was easy to accomplish and was calibrated to maintain an AFR of 12.60. Some shops lean the cars out for better dyno numbers, but I’d rather have it slightly richer for a safer car.”

“After the cam upgrade, the car feels and drives like a completely different animal,” Keith said. “The idle is superbly low and choppy but easily manageable and still very driveable, even in rush hour stop-and-go traffic, which I am forced to endure on a daily basis, I can feel a distinct difference in the torque curve, and Third gear, where the pull is strongest, is now my favorite! I have no regrets at all concerning the cam upgrade or the custom tuning performed by Phil at Tampa Tuning. I seem to get compliments from complete strangers on a daily basis, who all say the car sounds fantastic!”

When all was said and done, Keith left 360 Customs with a car that sounded amazing, had near-stock driveability, and most importantly, made 50 more horsepower than it did when it got there. This project is the perfect example of knowing what you want, doing the right research, and picking the right parts.

01. The base of the project was a custom-ground camshaft from Crane Cams that was acquired through Summit Racing.

02. In addition to the custom camshaft, valvesprings, retainers, locks, pushrods (not shown), and valveguide seals were also supplied.

03. The springs are a beehive design and are matched to the needs of the camshaft.

04. Valveguide seals might not have been completely necessary, but with the valvetrain taken this far apart, it’s the perfect time to change them.

05. The factory rocker arms are retained, but the trunnions are upgraded with a kit from Crane Cams.

06. In addition to the parts from Crane, Keith picked up some additional parts from Summit Racing, including a new oil pump, gaskets, and some ARP hardware.

07. With the valve covers removed, the rockers and springs are exposed. LS engines are fairly simply to work on.

08. The differences in the pushrods might not be glaringly apparent, but the Crane pieces (left) are significantly stronger than stock.

09. With the accessories and timing cover removed, the oil pump and timing set is exposed.

10. Disassembly is simple and straightforward. With the pump and timing set removed, four bolts hold the camshaft retention plate in place. Once that is removed the stock camshaft simply pulls out.

11. The three-bolt design of the Crane cam makes the installation super easy. Plenty of assembly lube was used on the bearing surfaces and lobes.

12 -13. The camshaft’s three-bolt design also meant swapping the timing set. Crane set us up with one of their adjustable double-roller sets. This gave us loads of adjustability, but also meant we needed to clearance the inside of the timing cover in a few places.

14. The timing set and oil pump reinstall to complete the cam swap.

15. The wider double-roller timing set required some clearancing to the inside of the timing cover. The areas that needed to be clearanced were marked and ground down.

16. With the cam install complete, attention was turned to the rocker arms.

17. A vise-mounted bearing press tool from Summit Racing was used to install the trunnion upgrade on the stock rocker arms.

18. Swapping valvesprings is easy with the right tool. After pressurizing the combustion chamber, the springs are compressed and the locks and retainers are removed. Once the springs are swapped, the process is reversed to install the new springs.

19. With everything completed, the car was brought to 360 Customs in Brandon, Florida, and put on the company’s Dynojet chassis dyno. The tuning duties were handled by Phil Aprea of Tampa Tuning.