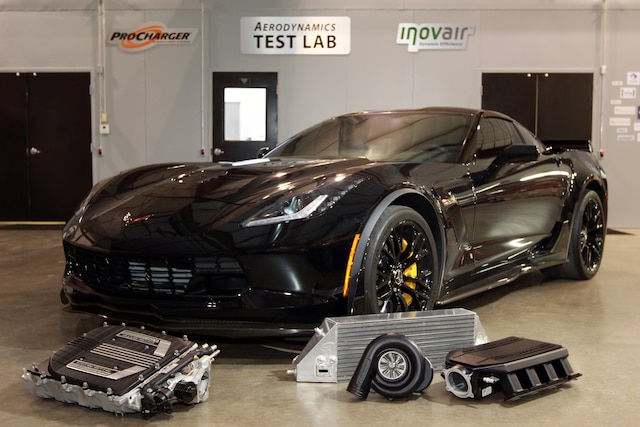 When the 2015 Corvette Z06 first debuted it was hailed as the greatest Corvette ever. At 650 horsepower, it certainly was the most powerful. But for the technical wizardry that gave it incredible aerodynamics and gobs of power at every rpm, some owners have been left unsatisfied. To fit the hood line, GM elected to utilize the compact Eaton R1740 supercharger on the new LT4. Not wanting to leave any power on the table, the new blower turns more rpm than the C6 ZR1’s TVS2300 supercharger and is nearly maxed out. This poses a problem not only to aftermarket tuners looking to crank up the boost and make more power, but some have even said that it transfers excessive heat to the engine. While it might make 650 hp during its SAE testing, some chassis dyno operators have had trouble duplicating those numbers (minus drivetrain loss) on more than one pull. The excessive heat appears to have been involved with Motor Trend’s recent issue when testing the Z06, which went into limp mode. GM has since stated that the intercooler system hadn’t been properly bled since the previous user. Some would say that this opened the door to the aftermarket. Always the innovator, ProCharger was happy to step right through.

Development began on ProCharger’s 2015 Corvette Z06 supercharger kit the minute it first hit the streets. Step one was replacing the Eaton R1740 with a fabricated aluminum intake manifold that looks nearly OEM and can handle anything you can throw at it. I mean let’s be honest, some will elect to run a D-1SC head unit but others will go nuts with a big ol’ F-1X. The intake manifold had to accommodate both crowds. Next, the supercharger kit had to be designed in such a way that the owner of an $80,000 supercar would feel there were no compromises – none of the typical worries about adding an aftermarket system. And then finally it had to make power, and gobs of it. It seems obvious that just putting a large blower on would accomplish that, but to appeal to your everyday Z06 owner it needed to make power with even a D-1SC and minimal changes.

After completing preliminary testing it appears that the new kit does that and more! Using the smaller P-1SC-1 head unit set to 10 psi (same as stock) along with factory ignition timing and fueling, the kit picked up 115 horsepower. With 91-octane pump gas, ProCharger was able to crank up the boost to 13 psi on the P-1SC-1 and hit 720 rwhp – still with no changes to timing or fueling. With an aftermarket cam, fueling changes, and a larger head unit the potential of this kit is 1,600 hp, according to ProCharger. While we know of at least one build already out there that has hit 1,000 rwhp, we were curious what your average guy with bolt-ons could accomplish using this kit. ProCharger got us hooked up with just such a vehicle. The build plan included the larger D-1SC head unit, headers, and meth injection. The engine: stock. The cam: stock. This was going to be interesting.

01. At the time of the initial install, this 2015 Corvette Z06 was completely bone stock. The hood was removed for photo reasons, but is not required for the installation.

02. No lift is needed for the install, just a floor jack and two jack stands. If you haven’t worked on a Corvette before, care must be taken to put the pads in the right location. ProCharger lays out every tool you need for the install in the instructions, including standard and metric wrenches, sockets, screwdrivers, torque wrench, pliers, and Torx bits.

03. Disassembly begins with the front aero parts to prepare for bumper removal. A series of pushpins, screws, and bolts secure them.

04. Simple screws and a few bolts hold the front bumper to the chassis.

05. The front bumper cover is pulled off carefully and set aside.

06. With the bumper cover removed it is easy to access the intercooler reservoir, which needs to be completely drained.

07. Now that it is empty, the lines are unclamped and the reservoir is removed.

08. Moving up top, the intercooler lines are disconnected from the factory supercharger.

09. The factory intercooler pump, bracket, and lines are unbolted and removed from the front of the car.

10. Out comes the factory heat exchanger.

11. To remove the factory blower, the access plate on top must first be unbolted.

12. Behold the internals of the little 1.7L blower.

13. The bolts that hold the supercharger in place are on the outside of each intercooler.

14. The factory blower weighs over 65 pounds, so the tech recommends lifting with your back … or is it your knees? I never get that right.

15. The ProCharger billet intake manifold reuses the factory intake O-rings, so those need to be transferred over along with all sensors.

16. Once prepped, the intake simply lowers down on top of the heads and is bolted in place.

17. The CNC billet ProCharger intake is an impressive addition to the engine bay. The cover as well as the entire intake can be ordered in raw or black.

18. The factory belt tensioner is removed to make room for the ProCharger head unit.

19. The D-1SC is installed with the bracket, bolting up with three robust mounting points. The customer chose black as the color of choice for the head unit and bracket, though traditional polished and satin are also available.

20. ProCharger even supplies its own radiator shroud rather than have you cut, trim, or modify the stock piece. This will allow you to put the car back to stock easily at any point, which is a nice touch appropriate for the application.

21. The reason for the new radiator shroud is this 4.5-inch thick air-to-air intercooler. ProCharger uses a “Bar and Plate” style intercooler, which is not only highly effective but allows sufficient airflow to the radiator and condenser behind it. In addition, stamped sheetmetal aluminum end tanks are used to cut weight instead of the more popular cast material. A rigorous design and testing procedure ensures proper temperature reduction and the lowest pressure drop.

22. The intercooler mounts vertically in the nose, using aluminum brackets that mount to the cradle. The MAF sensor screws into the front (left).

23. Our test car was equipped with an eight-speed auto, which meant the trans cooler was in the front. The kit allows the cooler to mount in the factory location, though.

24. These heavy-duty silicon hoses join the aluminum charge and intake tubes to the throttle body, blower, and intercooler. High-quality clamps are used for an easy installation and reliability.

25. The second charge pipe runs from the intercooler to the throttle body where it is secured by the clamped hose.

26. The intake tube connects to the blower with a 90-degree elbow. This car uses the Stage 2 “race” air inlet, which has a large open element air filter that pulls cold air from the factory location. There is also a version that connects to the factory airbox.

27. The factory radiator scoop, which works with the hood vent, is re-installed to preserve its functionality.

28. Since ProCharger makes its head units self-contained, you must install oil prior to first start-up. It comes with this special gear oil that should be changed at regular intervals, such as when you change the engine oil. Should something ever happen to the engine or blower, you never have to worry about contaminated oil affecting the other.

29. The nose goes on at long last. The folks at ProCharger got this done in 6 hours while stopping to take photos, though it might take your first install a bit longer.

30. Here is a look through the grille at the massive intercooler.

31. The finished product is clean and uniform, more so than you’d think with a billet CNC aluminum intake manifold. Then again, the black paint helps. Another bonus, ProCharger removed 123 pounds and installed 98 pounds – that’s a savings of 25 pounds off the nose.

32. The install was done completely in ProCharger’s Aerodynamics Test Lab.

34. On ProCharger’s in-house Mustang dyno, the bone-stock A8-equipped Corvette Z06 had a baseline of 537 hp and 594 lb-ft of torque at peak. The Eaton R1740 supercharger hits 9 psi almost off idle, which makes the LT4 very torquey to 4,000 rpm. It struggles to reach shy of 10 psi by the end of the run, as it fights the laws of physics. Remember that even twin vortices rotors are still air movers, not a compressor. It builds boost pressure via the resistance to airflow.

35. At 13 psi with the D-1SC, the Z06 belted out 679 hp and 592 lb-ft of torque at peak. As you can see by the graph, the power delivery is completely different. The boost increases linearly with the rpm with any centrifugal supercharger, which makes the top end capabilities far exceed a roots blower. Though its average power is higher than stock, it does give up some torque. However, its average boost pressure (7.1 psi) is lower than the baseline (9.0 psi) because the D-1SC is a larger blower and not quite in its efficiency range, unlike the R1740 which is nearly maxed out.

36. When this car returned to Texas, Custom Corvettes of Corpus turned up the boost to 15 psi, added methanol injection, and long-tube headers. The result: 808 rwhp! The difference between 13 psi is substantial when you look at the torque curve. The D-1SC is much more efficient at this boost level, which helps it to hold 600 lb-ft from 3,400 rpm up to redline – topping out just shy of 800 lb-ft. Though it is not an apples-to-apples comparison, given the different dynos, it certainly shows the potential of the ProCharger kit with no internal changes to the LT4.