Pick Up Big Horsepower With This Simple LS Bolt-On 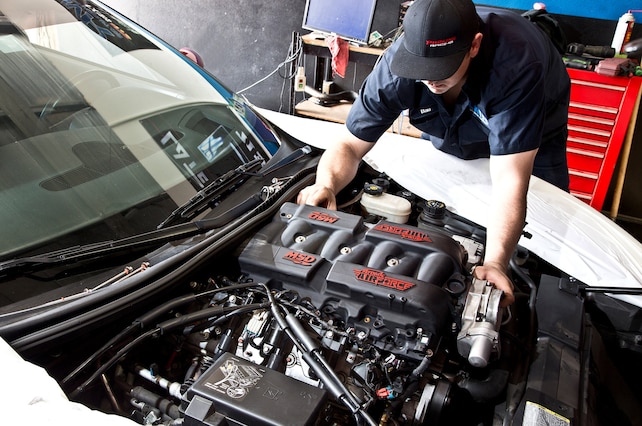 When BS flags go up, only to come right back down once the skeptics are silenced, chances are something extraordinary just happened. What’s more, when the people calling BS in the first place are highly respected experts in their field it makes the feat even more astounding. That’s exactly what MSD has accomplished with its new Atomic AirForce intake manifold for LS and LT1 small-blocks. Ever since the company unveiled its new intake at the 2014 SEMA Show, engine builders, performance shops, and consumers alike have all been dubious of its claimed 30-plus horsepower increase over a stock intake manifold. Seriously, how can a simple bolt-on that any monkey can install in a little over an hour net so much power? Outside of a bigger cam, ported heads, or a power-adder, numbers like that just aren’t possible. Or are they?

On mission to find out whether or not these claims are legit, we headed over to Late Model Racecraft in Houston to test out MSD’s new intake manifold on a 2008 Corvette Z06. Since a heavily modified combination would over-inflate horsepower gains, our test subject is highly representative of a typical street-driven Z06. Equipped with LMR’s Slayer package, modifications include a mild hydraulic roller cam, American Racing 1.875-inch long-tube headers, a cold-air induction system, an ATI underdrive pulley, custom PCM tuning, and an aftermarket intake manifold. Although LMR has had great success with the existing intake manifolds on the market, it was eager to test out the new MSD hardware. “I’ve seen people claim that the MSD intake is worth 30-40 horsepower over stock, and I just didn’t believe it. We had to test it out to see for ourselves,” says LMR’s Steven Fereday.

After establishing three baseline pulls that averaged 530 rear-wheel horsepower, the LMR crew got to work. Just one hour later, the manifold swap was complete. To the amazement of everyone in the shop, the Z06 laid down a three-pull average of 560 horsepower. Factoring in a 15 percent driveline loss, that equates to an overall gain of 35 horsepower at the crank. Keep in mind that the quoted 30 rear-wheel horsepower gain represents an average over three before and after dyno pulls. The horsepower difference between the lowest baseline pull and the highest pull after the manifold swap was right around 40.

Since LMR prefers collecting accurate and repeatable data instead of bench racing the biggest hp numbers on the Internet, it’s sticking with the 30 rear-wheel horsepower figure. “That’s just crazy. Picking up 30 horsepower from a simple intake manifold swap is incredible,” Fereday opines. Coming from a shop that builds 3,000-plus horsepower race cars, and has tested just about every LSX aftermarket part known to man, that’s quite an endorsement.

2. For the power-adder crowd, the MSD manifold’s durable polymer construction can handle up to 30 psi of boost, and tapping it for fogger nozzles is easy thanks to thick nitrous bosses. The massive 103mm throttle opening allows bolting up larger throttle-bodies without the need for porting.

4. Before getting to work on the install, the 2008 Z06 laid down a three-pull dyno baseline of 530 horsepower on LMR’s Dynojet. That’s pretty darn stout considering the car’s minimal mods, but with 427 hungry cubic inches to feed, the stock intake was definitely choking things up.

6. Next on the agenda is loosening up the intake manifold bolts and pulling the booster hose out of the brake booster before the manifold, fuel rails, and throttle body can be removed as a single assembly. The entire intake assembly must slide forward slightly in order to pull out the two rear bolts.

7. Although the MSD intake manifold measures slightly taller than the stock LS7 unit, the big increase in plenum volume comes from the overall differences in shape. Whereas the stock manifold slopes downward sharply from the center of the runners toward the intake ports, the MSD intake boasts taller, squared-off shoulders.

8. Prior to dropping the new intake manifold onto the engine, LMR technicians swapped over the throttle body, MAP sensor, and brake booster hose. Granted that this particular combo may benefit from a larger 102mm throttle body, sticking with the stock 90mm unit definitely provides a more precise representation of the true horsepower advantages of the MSD intake over the factory LS7 manifold.

10. With the new intake manifold bolted down, wrapping up the install is simply a matter of reconnecting all the hoses and electrical connectors. Once firing up the engine, it’s important to check for fuel and vacuum leaks before heading down the road.

11. Traditionally, striking a balance between low- and high-rpm performance involved plopping a large plenum on top of long intake runners. Since single-plane intakes and tunnel-rams won’t fit under the hood of a late-model, the MSD AirForce intake offers the best of both worlds in a compact package that fits neatly beneath the cowl.

12. During the post-install dyno pulls, the MSD intake moved enough additional air that it required fattening up the air/fuel mixture. Picking up 30 rear-wheel horsepower has never been so easy.

13. From 3,000 to 7,000 rpm, the across-the-board horsepower and torque gains provided by the MSD AirForce intake manifold are simply astounding. Although LMR remains hush-hush on its cam specs, the fact that the Z06’s power curve peaks at the same 6,300 rpm as a stock LS7 indicates the cam isn’t that much bigger than the stock unit.

Just about every aspect of engine design — whether it’s establishing intake port cross-section, camshaft duration, or header primary diameter — is a tradeoff between low-end torque and high-rpm power. The same applies to intake manifolds. Generally, long and skinny intake runners boost air speed and low-rpm performance while sacrificing high-rpm breathing. Conversely, short and fat runners improve high-rpm airflow and horsepower at the expense of low-end torque. Compounding this complex balancing act is plenum volume. Smaller plenums tend to increase low-rpm performance, while larger plenums extend high-rpm power. What’s truly impressive about the MSD intake is how it increased engine output at every single rpm point from 3,000 to 7,000 rpm. On our test vehicle, there was no tradeoff.

A closer examination of the AirForce intake manifold provides some insight as to how MSD pulled this off. Compared to a stock manifold, the MSD unit features a substantial increase in plenum volume. While this typically hints at a manifold that prioritizes high-rpm performance, popping off the removable lid reveals extremely long intake runners that boost low-end torque. By extending the driver-side bank of intake runners to the passenger-side bank, and vice-versa, the MSD intake is essentially a cross-ram manifold encased in a large plenum. In essence, MSD has devised a very clever way to package both long runners and big plenum under the sharply sloping hoods of late-model performance machines.