Level 3 Unlocked: Redline Motorsports takes a C7 Z06 to the next level with three common bolt-ons 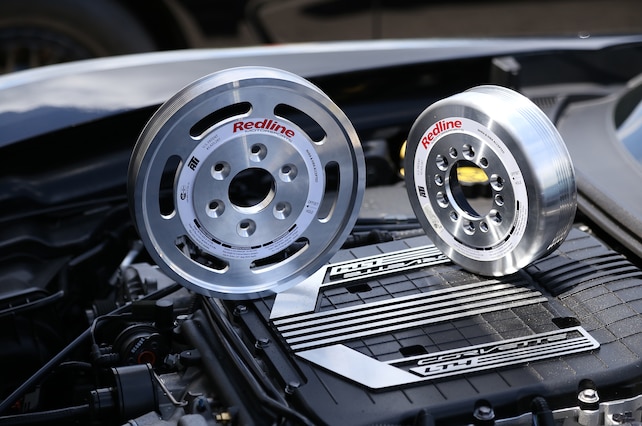 In our last installment, Redline Motorsports coaxed 31 rwhp from a 2015 Corvette Z06 on its in-house chassis dyno with just tuning. And, as promised, we planned to show what three common bolt-on upgrades could do. With a factory supercharged car, such as the C7 Z06, the two most obvious upgrades are an air intake and a pulley to up the boost. Positive displacement blowers, like the LT4’s 1.7L Eaton R1740, suck air through the throttle body, so any improvements in flow on the intake side tend to pay substantial dividends. These benefits are amplified with increased boost levels. And of course, what goes in must come out. The LT4’s stainless steel exhaust manifolds flow well enough to produce 650 horsepower, but to eke every last ounce out of it we’ll need better scavenging from a set of quality headers.

Redline chose American Racing Headers for a set of a 1-7/8-inch long-tube headers. Made from 304 stainless steel, ARH’s mandrel-bent tubes merge with a high velocity 3-inch collector. Each bank merges with an X-style “balance pipe” and mates to the factory mufflers after passing through a set of high-flow catalytic converters. Often, bolting on a set of headers alone will decrease boost, as backpressure is minimized. While making the same (or just slightly more) power with less boost is indicative of a performance improvement, it does not get us any closer to blowing the doors off the neighborhood supercar. Hence, this is the time to increase boost with a smaller supercharger pulley or an overdrive crank pulley.

Using a smaller blower pulley was deemed too invasive, necessitating removal of the entire supercharger assembly; disassembling it; and pressing on a new, engineered piece. Since the LT4’s supercharger utilizes a dedicated drive, Redline chose, instead, to bolt on an overdrive crank pulley as the means of increasing boost. This was much simpler, and just as effective. With 12 percent overdrive, the 1.7L Eaton goes from 9.5 to 12.5 psi. Since the factory balancer is one-piece, Redline’s kit uses an ATI harmonic balancer. The ATI Super Damper eliminates torsional crankshaft vibrations, which can be particularly troublesome in a supercharged application since it puts additional strain on the crank.

The Halltech Stinger-RZ intake was one of the first cold-air intakes to go on the market specifically for the 2015 Corvette Z06. The roto-molded plastic intake can actually increase boost on its own by eliminating restriction (typically 0.7 to 1 psi), particularly with the filter itself. Founder Jim Hall (of Halltech) says the factory filter designed for the 460hp Stingray was carried over to the 650hp Z06. Two versions of this intake are available with a synthetic filter (no tuning required) or a high-flow filter (tuning required). Redline went with the latter.

The Halltech Stinger-RZ intake was one of the first cold-air intakes to go on the market specifically for the 2015 Corvette Z06. The roto-molded plastic intake can actually increase boost on its own by eliminating restriction (typically 0.7 to 1 psi), particularly with the filter itself. Founder Jim Hall (of Halltech) says the factory filter designed for the 460hp Stingray was carried over to the 650hp Z06. Two versions of this intake are available with a synthetic filter (no tuning required) or a high-flow filter (tuning required). Redline went with the latter.

Redline Motorsports kicks off the install by removing the restrictive factory air intake on the 2015 Corvette Z06.

The factory balancer is pulled using a pulley removal tool.

Redline offers these pulley kits for several supercharged GM applications, with varying amounts of overdrive. This is a three-piece design manufactured by ATI Performance, with its SFI-approved Super Damper providing the harmonic damping.

The pulley installation tool is used to properly press the balancer onto the snout of the crank.

The overdrive pulley, though, simply bolts on.

Moving up top, you can see how less severe the bend in Halltech’s intake is compared to the factory intake. This helps increase flow and enhance the LT4’s breathing. A smoother laminar flow into the MAF allows for better readings, gradually necking down from the 105mm read area to the throttle body. Halltech now offers a carbon-fiber/Nomex version (aka CKNZ) that is more heat resistant for even better performance.

The Halltech intake uses a larger airbox to house a larger cone air filter that flows 689 cfm, made to Halltech’s specs by K&N, and will support 1,000 hp. In preliminary testing this intake was said to make over 30 hp compared to stock, and this was an early mold. The retail version should look identical to this, but with slightly better flow.

Moving underneath, the factory 2015 Corvette Z06 has a fairly free-flowing exhaust system, but long-tubes should be a significant improvement.

Like its predecessor, the C7 Z06 headers slip in from the bottom.

With the exhaust bolted back together, Redline threw the C7 Z06 back on the chassis dyno for some tuning. After a few more tweaks, the trio of bolt-ons and custom tuning gained 85 hp and 58 lb-ft of torque (from stock) with no sacrifices in the rpm range. That’s roughly 738 hp at the crank. Not bad for a day’s work.