The Bite to Back Up the Bark 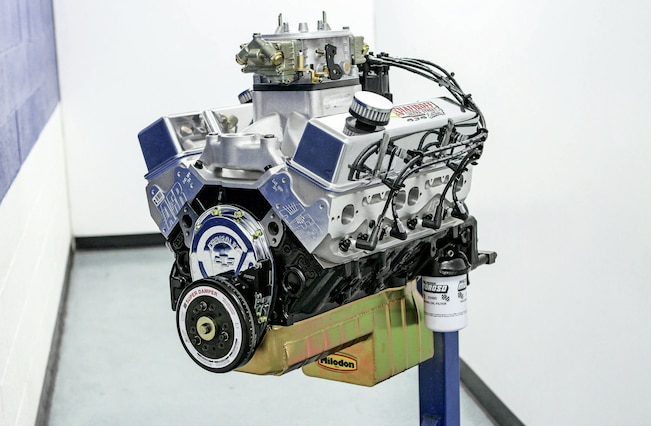 The trickle-down effect of racing is a proven fact, and one has to look no further than the latest small-block Chevy offering from Scott Shafiroff Racing Engines (SSRE). The Big Dawg 434 was born from street racers who requested a more streetable version of the company’s rowdy—and race oriented—765hp Sportsman 434. The result is a small-block the pushes the dyno needle to 700 hp but still runs on 93-octane gasoline. The Big Dawg, as it has become known, carries a street-racing pedigree but you don’t have to be a TV-star to enjoy it.

The Sportsman 434 is popular because the engine isn’t a dyno queen and is quite the workhorse on the dragstrip. Its on-track success is what helps the street iteration perform so well on pump gas. “When the 245s first came out, what we saw on the race engines was so impressive. The dyno is one thing, and those heads ran really great on the dyno, but it also ran awesome on the track,” SSRE owner Scott Shafiroff comments. “The engine accelerates so well; the shift recovery is awesome. It is one of those engines that works great in the real world.” He gives a big nod to the AFR 245s for that performance, so it was no surprise that the shop decided to use those cylinder heads as a foundation for its latest pump-gas brawler.

Converting a race engine into a street one isn’t as simple as just cutting the static compression ratio down a few notches. It is, however, the first step so SSRE drops it from 14.25:1 to a more palatable pump-gas compression of 10.95:1. That was an easy swap as Shafiroff tapped Wiseco to manufacturer the forged pistons. Next was the camshaft profile for the new street engine. Shafiroff shares, “we spent a lot of time testing cams.” The final cut came down to basically small-, medium-, and large-sized camshafts, with Shafiroff selecting the one that made the best average power.

Naturally, a little poking and prodding was required to get some specs, but all he would reveal is that the lift was in the 0.670-inch range with duration at 260-ish/270-ish. Then Shafiroff jokes, “The spec sheet comes with every engine you buy.” As this engine grows in popularity, Shafiroff hints at more to come from the Big Dawg series. Last year, the company began releasing engines using what it calls the Holy Rollers valvetrain package. It is a hydraulic roller camshaft and valvetrain for the ultimate in performance with minimal valvetrain maintenance. We suspect the company will follow suit with this engine considering its overwhelming success in a few SSRE big-block packages.

Cam specs are one thing, but a good-running street engine is more than the stick in the engine. “If you don’t have a trailer queen then I suggest you definitely upgrade the T&D shaft rockers,” suggests Shafiroff. He continues, “Between those and the high-quality valvesprings, these are real street engines.” The longtime engine builder went on to talk about how things were done in the old days when he and others had tried to run Big Chief-headed 632s on the street and had nothing but valvetrain troubles. “I used to build those engines (Ed note: Big Chief 632 street engines) but with the technology today, we can build legitimate street motors. The Big Dawg can drive down the road without the valvetrain problems like many years ago,” he remarks. He is quick to credit the roller lifters of today that utilize a bushing instead of needle-bearings on its roller tip. As Shafiroff puts it, “It is way more durable and you can really drive these things on the street.”

As the notion of a legit 700hp pump-gas street engine settles in, the next question begging to be asked—what about nitrous? Shafiroff responds with a laugh and says, “These motors love nitrous!” A good nitrous system would bump output to 1,000 to 1,100 hp, but Shafiroff cautions that the usual upgrades are needed, like Cometic head gaskets, better crank and connecting rods, and HellFire rings. Those are all options that are clearly listed on the SSRE website.

With the notion of nitrous out in the open, Shafiroff began rattling off a host of ideas on how to run the nitrous setup on the street, including a trick he used in offshore boating and street-race cars nearly 30 years ago. The gist of the concept is to run a second fuel system with a one or one-and-a-half gallon fuel cell with race fuel. The second fuel system feeds the nitrous setup while the engine continues to run on pump gas. It allows you to burn only pump gas stuff while cruising down to the local hangout but have race fuel ready for on-the-bottle fun.

Seven hundred horsepower or hit the button for instant gratification over 1,000 hp from an engine package that can be driven to the track—born from a drag racing engine and refined by technology. The SSRE Big Dawg 434 is definitely one combination you don’t want to run into on the backstreets of “Anywhere,” USA.

01. The foundation for most of the SSRE small-block engines is the Dart Little M block. It is more than capable of containing big power—especially if nitrous is added to the Big Dawg 434.

02. The first part of building a pump-gas engine is to have a reasonable compression ratio. The Big Dawg 434 rumbles along with 10.95:1 compression courtesy of Wiseco forged pistons, built to SSRE specs.

03. The base Big Dawg package comes with a Scat rotating assembly. The engine we photographed has the upgraded M-Power package ($395). It features a Manley crankshaft and connecting rods. All Big Dawg 434 engines feature a 4.00-inch stroke.

04. The connecting rods in this engine build are by Manley, are made from 4340 forged steel, and include ARP 2000 bolts.

05. The camshaft is a “street” solid roller that was designed by SSRE and cut by COMP Cams. Specs are vague, but Shafiroff says there is full disclosure of the engine specs on the shipping slip. Valve lift is in the 0.670-inch lift range and duration is 260-ish/270-ish.

06. The bore needed to achieve 434 ci is 4.155 inches (with a 4-inch stroke). A special tapered tool is used to install the Wiseco pistons. Those are Total Seal rings wrapped around the forged piston.

07. Once the short-block is finished, it is time for the top-half and ancillary items to be added, like the oil pan, intake, and carburetor.

09. T&D shaft rocker arms come standard. An optional set of T&D arms with needle-bearing tips are offered for an additional $240.

10. There are a few different oil pans that can come with the Big Dawg 434; this one is equipped with a Milodon pan and oil pump setup.

13. Our test engine was fitted with an ATI Performance Products balancer, which is SFI-approved, as the owner plans on hitting the dragstrip with his Big Dawg. All vehicles that run 10.99 or quicker require an SFI-approved balancer.

14. A Motown SuperMod ported intake manifold sits on top of the engine and our test bullet sports a Holley Dominator carburetor.

15. Special, engraved valve covers come with the engine, or the SSRE crew can bolt on some plain covers for those who want to keep their Big Dawg a secret.

16. All SSRE engines are dyno-tested before being shipped to the customer. Our test subject rocked the dyno with 705 hp at 6,600 rpm while torque peaked at 600 lb-ft at 5,500 on Sunoco 93-octane gasoline.