How to Add Power Steering to a 1967 Chevrolet Chevelle 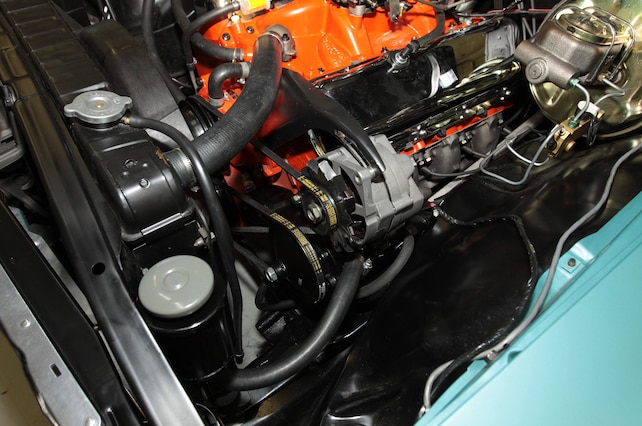 There was a time when earthlings thought the world was flat, wine was bad for you, and power steering made cars run slower on the dragstrip. A lot has changed since the Dark Ages and now it’s common knowledge that a power steering pump doesn’t consume power when the wheels are pointed straight. And since power steering boxes—no matter which make of automobile—always have a faster steering ratio than its manual counterpart, it’s quicker and easier to correct a car skidding sideways.

This skidding sideways condition can be leaving the line at the drags or straightening out a car dangerously careening off the road in a rainstorm. Needless to say, the faster one can exit the grasp of either situation the better. Another thought to ponder is whether the amount of time saved getting a drag car back pointed straight faster offsets the minimal amount of parasitic loss encountered, we’d say it does.

Moving on to other considerations, unless one uses their car to double as an exercise machine, manual steering is not the way to go for a street-driven Chevelle. The added effort to park a manually steered car can lead up to strained neck and shoulder muscles, not to mention making the driver look goofy trying to parallel park.

During the course of researching where to source the parts needed to convert our 1967 SS396 Chevelle into a PS car was a learning experience and shed new light on why manufacturers don’t always include directions. It would seem to the casual observer if you’ve seen how one 1966-’67 Chevelle is equipped with power steering you’ve seen them all. Not true, and we confirmed this at Original Parts Group’s annual classic car show where Chevelles make up a huge portion of the field, and discovered very few early Chevelles shared a similar setup.

1. As shown in this image, removing the alternator and cast-iron alternator mounting bracket allowed for a straight shot to the stock Chevelle manual steering box.

3. Our first step to removing the manual steering box was to disconnect the rag joint (steering coupler).

4. Next, the cotter key on the pitman arm was removed by cutting the ends with diagonal pliers (side-cutters) and then easily extracted with a glass tool.

5. The castellated nut was loosened but not removed. Then, with a quick hammer rap to the side of the drag link the joint broke free. If this didn’t work, a pickle fork would have been the solution.

6. Three bolts hold the steering box to the framerail. One is inaccessible without removing the driver-side front bumper brace. Bumper alignment: The first step was to scratch a line to indicate where to remount the bumper.

7. Next, the bumper brace was completely unbolted from the framerail (two bolts) but it was only necessary to loosen the brace where it attached to the bumper with a chrome bumper (carriage) bolt.

9. Once completely disconnected, the manual steering box dropped out from the bottom of the car.

11. Installing the CPP 500 Series box was a direct bolt up to the existing holes in the frame. The rag joint was bolted and new CPP pitman arm installed. Note there is an early and late style pitman arm. The difference is the degree of the drag link pin.

12. Not likely in every instance, but for our installation a test-fit of the power steering pump revealed the return line on the pump ran directly into the path of the two hoses connecting to the steering box.

13. A standard tubing bender would not fit, so very carefully we made a cold bend with a Phillips screwdriver inserted into the return tube.

14. The cast-iron alternator mount had to be installed first and then the stamped-steel power steering pump bracket included with the CPP power steering conversion kit fit.

15. The power steering bottom mounting bolt was installed before the pump pulley was installed. Note an open-end wrench held on the flat of the pump shaft prevents movement while tightening.

16. It was imperative to ensure the power steering lines (hoses) were routed away from the whirring V-belts. Note the CPP double-groove pulley on the harmonic balancer is visible.

17. Over tightening the power steering pump V-belt is a common mistake that will destroy bearings. A properly tensioned V-belt will be able to twist completely onto its side.

18. Nothing beats a good, high-quality synthetic power steering fluid. We primed the pump, filled the remote reservoir, and then rechecked the fluid level.

19. Sans alternator we started the engine, turned the steering lock-to-lock to initiate pump pressure, and then checked (watched) to ensure the V-belts weren’t rubbing the power steering hoses. The alternator was reinstalled and the job was done.