Direct Gasoline Injection is Here, and it is Time to Get Familiar

The Future is Now 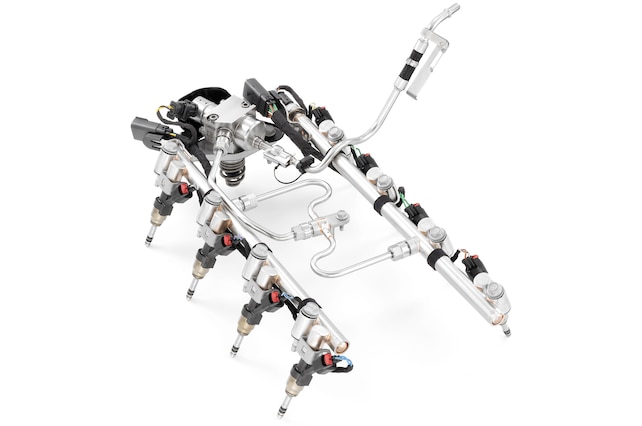 As we entered into 2014, the industry was abuzz with the acronym “GDI,” otherwise known as Gasoline Direct Injection. The “gasoline” distinction is significant because direct injection has existed in the diesel industry since the ’70s. While the invention of GDI, for the aerospace industry, as well as its first usage on a passenger car predates that, it really didn’t take off until the mid-’90s. GM was on the forefront in 2003 when it introduced the new Ecotec four-cylinder engines using what it called Spark Ignition Direct Injection (SIDI). A few years later came the 3.6L LLT V-6, and of course GM made headlines again by releasing two of the most powerful direct-injection Gen V small-block V-8 engines ever made.

Technology rivaled only by the Ferrari 458’s 4.5L V-8 and Audi/Lamborghini’s 5.2L V-10 is nestled between the fenders of the ’14-’15 Chevrolet Corvette Stingray and ’15 Corvette Z06. From 1985-2013, Chevy small-blocks were fed using “port fuel” technology, which is where the split into the modern world of fueling begins! Looking back at the last round of GM V-8s (Gen III/IV), the fuel was always injected into the engine through points in the intake manifold and shot at the intake valve before it made its way into the combustion chamber. This method would leave fuel droplets clinging to the walls of the intake port, sitting on the back of the intake valve, and trying hard to mix with the oncoming charge motion of air that was just ingested. As the OEMs continue to work harder to improve the distribution of every droplet of fuel, we can see how this design has its flaws.

With gasoline direct injection (GDI) engines, the air/fuel mixture is formed directly in the combustion chamber. No concern is needed for how effectively the fuel atomizes or flows through the cylinder head. Instead, only fresh air enters the combustion chamber via the intake valve. The fuel is injected into the airstream at extremely high pressure. The result is an optimum swirl effect and improved cooling of the combustion chamber. This, in turn, paves the way for higher compression and greater efficiency—leading to a reduction in fuel consumption, an increase in power, and a substantial improvement in driving dynamics.

Here’s an actual GDI injector assembly. Take note of the extended body that is needed to reach down into the combustion chamber.

At 2,175 psi the OEM LT1 injectors flow roughly 160 lb/hr, which is needed to spray nearly the same amount of fuel, but in only 25 percent of the time, as the injectors in the outgoing LS3 need. Modifying the injectors to increase the flow has some unintended consequences on the flow characteristics. At present, we are at the mercy of the aftermarket to develop a higher-flowing injector if you plan on making more than 1,000 hp without supplemental fueling.

At first glance, the new GM LT1 engine looks a lot like the LS, but there are quite a few changes, with the main one being how fuel is delivered to the combustion chamber.

Moving the fuel injector to the combustion chamber has many consequences from a design perspective. The injector must be able to withstand over 1,000 degrees, and there is a limited amount of space in which to fit. Yet the injectors must be fairly robust in terms of flow and pressure because the injector can only spray when the exhaust valve is closed. Compared to port injection, there is roughly 25 percent of the time per crankshaft rotation to get the same mass of fuel into the chamber. Additionally, the injectors must compete with 800-1,500 psi of cylinder pressure, rather than just 14.7 psi of atmospheric pressure or even 30 psi of boost in the manifold.

Direct-injection engines use between 500-2,800 psi of fuel pressure to squeeze out as much volume as needed in such a short window and keep pace with cylinder pressure. At 2,175 psi, factory injectors pump out 160 lb/hr using a 64-volt input and low impedance (peak and hold) in the LT1. An LSx engine by comparison would vary the injector’s “on-time” or duty cycle from 3-85 percent with a constant 58 psi of fuel pressure, 12-volt input, and high impedance (saturated). Instead of a spraying a typical fan pattern, GDI injectors’ extremely fine droplets are aimed at the “fuel bowl” at the center of the piston. The design of the piston crown is crucial for proper combustion in a GDI engine. In high-boost applications, even a well-designed piston has issues keeping the fuel from the cylinder wall (more on this later).

In addition to improved fuel mileage, the efficiency of direct injection allows for higher static compression ratios. The LT1 is 11.5:1, nearly a full point up from the LS3, while the supercharged LT4 is 10.0:1 (almost a full point higher than the supercharged LS9). GDI taps into the unused cooling potential of fuel, the latent heat of vaporization, in dropping combustion chamber temperatures. A cooler chamber means greater resistance to knock, and the ability to run more compression. The benefit of the compression jump is evident in the LT1’s torque curve from 2,000-5,000 rpm, which rivals the 427-cubic-inch LS7.

Front and center is the mechanical fuel pump that takes its cues from a camshaft lobe and the E92 ECM to vary the fuel pressure from 500-2,800 psi to meet a target air/fuel ratio.

COMP Cams released a line of aftermarket Gen V camshafts with five different fuel pump lobes at the 2013 SEMA Show. In the diagram you can see that they vary from stock to a 74 percent improvement in flow by using 3-5 throws and 5-7.5mm of lift. This is key to making substantially more power (without running out of fuel).

Wiseco and other aftermarket piston manufacturers must also use a fuel bowl in the center of the piston to catch the fuel coming out of the GDI injectors. Otherwise, the fuel could find its way to the cylinder wall, away from the flame and compression.

Using either methanol injection, race gas, or some combination of the two, north of 900 rwhp has been achieved on the factory fuel system with COMP’s cam lobes. Of course, a 416ci engine, ported cylinder heads, boost, and considerable dyno tuning were also needed.

Moving away from the combustion chamber, it is important to note several other key differences between port and direct injection. At the back of the engine, behind the intake manifold, is a beefy little stainless steel contraption that is the high-pressure, mechanical fuel pump. The pump is actuated by a unique looking lifter that rides on a triangle lobe on the rear of the camshaft. This trio of lobes equates to three pumps per cam revolution. Because of this design, the volume of fuel is fixed based upon rpm. Thankfully, manufacturers such as COMP Cams are able to use different lobe profiles to increase the fuel flow for those looking to make substantially more power than stock. As mentioned previously, fuel pressure is dynamic—to increase or decrease fueling. Fuel pressure is regulated by an internal solenoid-controlled valve, which takes commands from the E92 controller (ECM) depending upon speed and load. The high-pressure pump is fed from a low-pressure pump that is located in the fuel tank, as was traditional in years prior.

So now that we have a basic overview of GDI, what happens when we start looking to make more power? One hurdle is the fuel injectors. In order to make power we have to mix the correct mass of fuel with a proportionate mass of air. The installation of a supercharger will most certainly increase the mass of air, thus requiring a greater mass of fuel. The peak and hold (low impedance) injectors use a high current to open quickly, and once the injector is open it slowly ramps down the amperage until the mass of fuel is delivered. During this opening time, the injector is limited by total fuel flow. In addition, it is also limited by the spray pattern. The injector has six strategically placed microscopic holes that are aimed at specific parts of the combustion chamber. GM engineers have spent countless hours in modeling the chamber to determine where to aim the injector holes for the optimum air/fuel mixture. Any droplets not mixed will produce puddles that will kill combustion, raise emission output, and ultimately cause poor performance. So when several aftermarket companies attempted to drill the factory injectors to increase flow, it has these unintended, negative consequences. Until a company such as Injector Dynamics has aftermarket GDI injectors available, builders are limited to around 1,000 horsepower (with the aforementioned COMP Cams fuel pump lobes).

Tuning is another important consideration for the C7’s E92 controller. Things like torque management take on a whole new meaning, as the calibration is no longer airflow and TPS-based. Instead, the computer uses torque as the target. A runaway or closing throttle can be symptomatic of this misunderstanding. In addition, injector and cam timing are crucial. With the short window of time to fire the charge, you can easily send raw fuel out the exhaust or wash the oil-filmed cylinder walls clean (not good!). Calibrating the computer is best left to someone with experience and training in direct-injection engines.