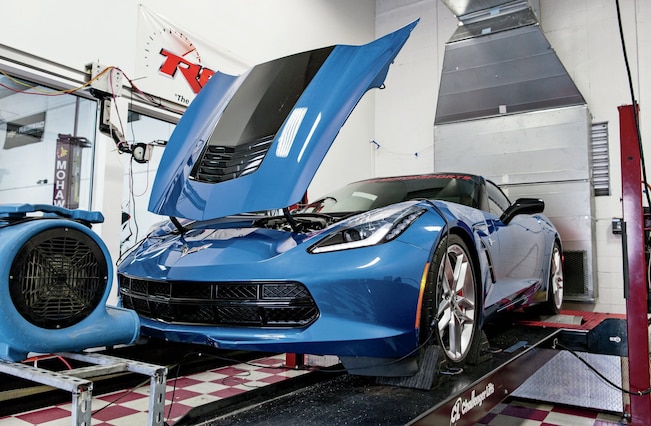 It's a pretty simple formula, really. Take any late-model GM V-8, add some boost, and go run a number. We've been doing it here in Vettefor years, but with the new '14 C7 and its LT1 engine, the biggest question was, “will it still work?” Could the aftermarket boost the new direct injection V-8? And if so, would the high-compression engine respond like the old LS3 did? In short, the answer is yes. Yes, yes, yes! In fact, not only can the LT1 handle boost, it loves it. We're talking 580 rwhp and 553 lb-ft of torque on an almost bone-stock engine with a stock fuel system in less than a day! All from a 100-percent bolt-on supercharger kit that ships to your door and installs with simple hand tools. It really doesn't get much easier than that … well, maybe until the Z06 comes out, but if you're looking for boosted C7 performance today, there are plenty of great choices.

For this test, we teamed up with the lunatics at Redline Motorsports in Pompano Beach, Florida, who had grown tired of their nitrous-injected 10-second quarter-mile missile C7 already and were looking to up the power full time. Howard Tanner, who runs Redline, uses his personal C7 as a tesbed for new products, and when he heard that Doug Ring and the crew at East Coast Supercharging (ECS) were ready to ship a supercharger kit, he wasted no time getting a system in the mail. What Howard ordered is the same exact kit you can, which features a Novi 1500 self-contained supercharger head unit, a set of beautifully CNC-machined brackets, a large air-to-air intercooler, an eight-rib supercharger pulley system, and all of the pipes, couplers, bolts, and accessories you'll need to make everything work. Touted by ECS as a simple-to-install-at-home, 100-percent bolt-on supercharger system, we wanted to see just how simple it was to make big power.

Follow along as Redline drops the ECS kit in place, and make sure you check out the dyno numbers at the end of this story. If you're itching to make your C7 faster or you're waiting for the Z06 to drop prices on used Stingrays, you're going to want to pay attention to this formula.

01. For under $5,500, East Coast Supercharging (ECS) will ship a complete bolt-on supercharger kit to your door that is capable of supporting upwards of 900 hp with the supplied Novi 1500-series supercharger. The dedicated eight-rib belt drive system, high-flow horizontal mount intercooler, and CNC’d mounting brackets are all top quality and the kit includes every nut and bolt you’ll need for a complete installation.

02. Designed to be installed “from beginning to end in a day in your driveway and with no need for special tools or removal of the front fascia” this is truly a DIY kit. Of course, us magazine guys aren’t lucky enough to afford a blow-off valve, let alone a C7, so we turned to the top-notch crew at Redline Motorsports in Pompano Beach, Florida, to show us how it’s done.

03. Not wanting to waste any time, the Redline crew dug right into the installation (Hey, it said a day from start to finish, right?), which began with the removal of the factory air inlet scoop …

04. …and air intake tubing. If you’re following along at home, note that you will not reuse these parts, but you will need the factory MAF sensor, so set that aside.

05. Underneath, Redline pulled the factory air dam out of the way, which allowed for ample room to work. This air dam will also need to be modified/replaced to allow airflow to the horizontally mounted air-to-air intercooler once the supercharger system has been installed.

07-08. Of course, to get to the bolt, you’ll need to make some room. ECS recommends removing the factory steering rack to do this, but Redline found it was possible to remove the rack bolts and slide the rack out of the way to gain access to the balancer bolt.

09. Once removed, you can slide the new eight-rib hub over the factory balancer, and using a new bolt, snug the system back to spec. Note, you will need a new balancer bolt for this job, as the stock bolt is “torque to yield” and cannot be reused.

10. The factory ABS block is big and it would get in the way of the supercharger head unit if it wasn’t relocated. Luckily, ECS supplies a new bracket (on the left) with the kit that allows you to move the ABS block out of the way, and the installation is simple.

11. A single bolt holds the bracket in place.

12. Once installed, you can bolt the ABS block into its new location. OK, it’s not quite that simple, as you will have to ever-so-slightly loosen the larger brake lines to “gently” bend them to fit. If you’re careful, you won’t have to bleed the brakes. Redline was able to bend and reposition without any issue.

13. Finally, it was supercharger time. Well, almost, but the all-black CNC-cut billet brackets were just as sexy as the supercharger itself, and you can see why ECS is a popular choice for Corvette installations. This bracket will bolt to the engine and hold the supercharger…

14. …which is responsible for turning fresh air into compressed awesomeness. The Novi 1500, which ships with the base ECS supercharger system, is self-contained and capable of producing upwards of 900 horsepower. Need more power? ECS offers a Novi 2200R head unit that can support over 1,300 horsepower!

15. It’s easiest to install the supercharger bracket system in pieces, and the cylinder head bracket was the first step for the Redline crew. As you would expect from a true bolt-on system, all of the hardware was supplied in the kit and, we’re happy to report, all fit correctly without a trip to the bolt bin.

16. The supercharger drops in place next, although you’ll want to install it and the belt as one unit, just to get everything situated properly. Note that there are no oil or water lines to run, as the self-contained Novi 1500 head unit needs no additional supply lines. That’s a nice feature for a set-it-and-forget-it enthusiast.

17. ECS knows that proper belt tension (and width) is critical to making big boost, and the kit features a very well designed tensioner system. Shown here is the spring tensioner that keeps the belt tight as the engine accelerates and the belt stretches. There is also a manual tensioner built into the head unit bracket, which needs to be set to “tight.”

18. With the boost maker in place, it was time to swap gears and get to work installing the boost cooler – also known as the intercooler. First up, you’ll want to work on installing the mounting bracket, which can be bolted to the factory lower radiator support. Redline chose to install several “nutserts” here to allow for an easy installation of the supplied bracket.

19. And just like that, the intercooler slides into place. The horizontal design is quite ingenious, as it allows uncompromised airflow to the factory radiator/condenser, while still grabbing enough air to keep the supercharger air temperatures under control. If you’ve ever had an overheating C5 or C6 before, you’ll appreciate this design.

20. The piping from the supercharger head unit to the intercooler literally slips into place, and the fit and finish was excellent. Redline had no trouble lining up the pipes, and the supplied silicone couplers tightened down easily with the stainless steel T-bolt clamps. Remember, you want a good tight fit on these pipes or you’ll be wondering where your boost went after a session of spirited driving.

21. A quick bit of housekeeping here, as you’ll need to cut and extend the factory radiator water line to make room for some of the supercharger’s piping. A single cut and the supplied extension made for a simple splice job.

22. The ECS supercharger system is unique in that it A) uses a modified factory airbox and B) restricts airflow before the supercharger inlet to help regulate overall boost. This restrictor plate slides in place and keeps peak boost under control for factory engine configurations. If you want more airflow, well, you know what to do.

23. With the restrictor installed, you can bolt on the factory airbox and install the supercharger inlet tube. Of course, don’t forget about the intercooler-to-throttle body piping, which will also include the factory MAF sensor. And with that, you can step back and admire your work. Or, in Redline’s case, you can fire up the beast and head directly to the dyno!

24. With a little over 9 psi of boost, the C7 laid down 580 rwhp and 553 lb-ft of torque. Compared to the baseline run, the Redline C7 picked up 145 rwhp and 125 lb-ft of torque thanks to the ECS supercharger system! For an actual day’s worth of work (with time for a long lunch), this is truly an excellent option for any C7 owner looking to lay down big numbers without any hassle.