Five Engine Packages That Can Churn out Anywhere from 630 to 1,500 hp for Your C7 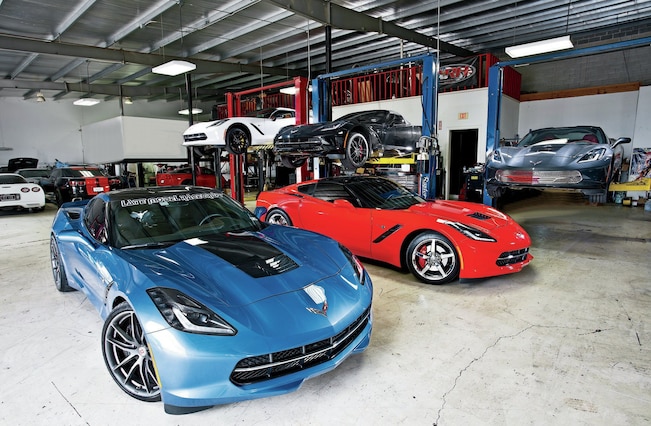 Take a trip down to Houston and it's not just the wicked heat or humidity that will leave you hot and sweaty. It's the wicked fast cars. In these parts, sea level dragstrips, lax emissions laws, and big-time oil money conspire to produce some of the fastest cars in the country. Unless you're putting down 600 rear-wheel horsepower don't even bother showing up on cruise night. This is a land where showroom-fresh performance machines log dozens of quarter-mile passes at the track before their license plates show up in the mail. Leading the charge in this horsepower epidemic is Late Model Racecraft (LMR). Its list of credentials include building the world's first 9-second fifth-gen Camaro, setting records at the Texas Mile, and running 6.80 at 212 mph in its own fourth-gen Firebird shop car. That's great, but we know what you Corvette guys are thinking: Enough with the lesser GM products, already! You're in luck, because ever since GM released the C7 last fall, LMR has been pushing the envelope of the latest-generation Corvette on a daily basis.

Want proof? Just one week after taking delivery of a customer's brand-new C7, LMR worked its magic and busted off some 9-second passes at the track, which made it the first C7 in the world to run 9s. This, mind you, was accomplished with a stock short-block, stock suspension, and 18-inch drag radials in a car loaded with every factory option in the book. LMR is also home to the world's most powerful C7, a stroked, supercharged, and nitrous-injected beast that lays down 1,270 rear-wheel horsepower. The good news is that getting in on the action is as easy as ordering up an LMR engine package, dropping your car off at the shop, then leaving a trail of defanged Vipers in your wake. We took a trip down to Houston to take a closer look at LMR's turnkey C7 packages. Depending on whether you prefer your engine to be tickled with a head port and cam, stroked, supercharged, nitroused, turboed, or all of the above, you can have anywhere from 530 to 1,200 rear-wheel horsepower.

Straight from the factory, the LT1 small-block is a beast of an engine good for 455 horsepower and high 11-second quarter-mile times. That sounds like a lot, but simple bolt-on mods will only go so far. LMR's Reaper package is a good place to start. It includes CNC-ported cylinder heads, a custom hydraulic roller camshaft, American Racing 1.875-inch long-tube headers, a Circle D torque converter, and 18-inch Mickey Thompson drag radials. Although the LT1's gasoline direct injection system has proven difficult to tune, LMR has figured out a way to tweak the fuel mapping through the stock PCM. The Reaper package helped this crimson missile lay down 530 rear-wheel hp and pushed it to multiple 10.6 e.t.'s at 127 mph at the dragstrip. If that's not enough power and speed for your appetite, LMR will strap on a Nitrous Express plate system and a progressive controller. The result: high 9-second passes at 133 mph.

One of the few downsides of being the first dude on the block with a new C7 is that GM will inevitably launch more potent models in the future, which is exactly what happened when they announced the upcoming 625hp supercharged Z06. Fear not, because two can play at the supercharged game. By adding an A&A centrifugal supercharger system, which utilizes a Vortech V-3 head unit, along with American Racing 1.875-inch long-tube headers, an LMR oil breather system, and custom dyno tuning to a stock LT1 long-block, LMR can boost a base C7 up to 572 rear-wheel horsepower. That's through an automatic transmission, folks, so manual Vettes can expect slightly more power. Once they hit the streets, that will be plenty of grunt to keep those Z06s in check.

If throwing a big supercharger on an LT1 is worth some serious power, why not go bigger? That's exactly what you get with the LMR750 package. It comes with everything included in the LMR650 package, but utilizes a larger Paxton Novi head unit as part of its ECS supercharger kit. To take advantage of the additional airflow, LMR adds a custom hydraulic roller camshaft to bump output to a staggering 705 rear-wheel horsepower. That's well over 850 hp at the flywheel. Forget about Vipers. This package is hungry for Ferraris and Lamborghinis.

This one's a street racer's worst nightmare. Beneath the hood, its custom chrome dress-up bits make it look like nothing more than a blinged-out poseur. Hiding inside the fenders, however, are a pair of Precision 66mm turbochargers that pressurize the LT1's intake manifold to the tune of 847 rear-wheel horsepower. Output like that requires a long list of supporting hardware that includes custom hot and cold side piping, Precision 38mm wastegates, custom LMR fuel and oil systems, an AMS 2,000 boost controller, a TiAL blow-off valve, custom dyno tuning, and a McLeod RXT twin-disc clutch. The turbos don't just produce insane horsepower, they keep the LT1 as quiet as a stocker, too.

Behold the most powerful C7 Corvette on earth. At 1,270 rear-wheel horsepower, it's packed with every go-fast trick in the book, yet its cam barely lopes at idle. To put this kind of output into perspective, the 230 hp it loses between the flywheel and rear wheels (1,500 vs. 1,270) due to parasitic driveline drag is almost as much hp as the C4 Corvette's L98 small-block produced from the factory. Since the stock LT1 long-block just isn't up to snuff, the LMR1200 package has been upgraded with a 416ci engine fitted with forged internals, a custom camshaft, and ported cylinder heads. The heavy hitters in the equation are an A&A supercharger kit, which utilizes a Vortech YSi head unit, and nitrous and methanol injection systems from Nitrous Express. Driveline reinforcements come courtesy of The Driveshaft Shop halfshafts, and a McLeod RXT twin-disc clutch. Toyo Proxes tires wrapped around HRE wheels provide the stick, and the beastly mill barks out a set of American Racing 1.875-inch headers. Is anyone man enough to try to dethrone this thing?