Newsletter
Sign Up today for our FREE Newsletter and get the latest articles and news delivered right to your inbox.
Home
Camaro Performers
How To
Engines & Drivetrain 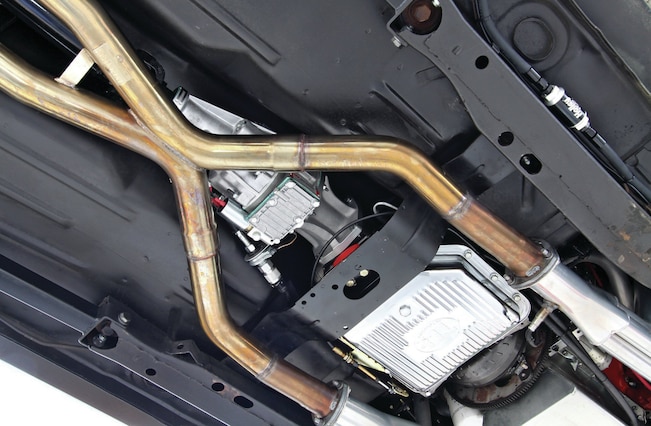 GM’s line of Turbo-Hydramatic transmissions were some of the stoutest pieces ever fielded behind small- and big-block Chevy engines. But the TH350 and TH400 three-speed versions (and their two-speed Powerglide cousin) fall short when it comes to highway cruising. The reason for this is the conspicuous lack of an overdrive gear. Back in the late-’60s gas was cheap and highway cruising speeds were lower. Also, GM was more concerned with keeping warranty claims down than with fuel economy. Given this, our vintage Camaros were stuck with a final transmission drive ratio of 1:1.

These days some people think the best way to fix this is to swap in a more modern overdrive (OD) transmission, but there can be downsides to this plan. Older OD transmissions, like the 700-R4, can require trans tunnel modifications and aren’t nearly as robust as their non-overdrive brethren. Also, many guys with classic cars are hesitant to yank out their numbers-matching transmissions and want to keep their rides whole.

Gear Vendors has a way to let you possess the proverbial cake and dine on it as well. Their overdrive unit bolts onto the back of your existing non-overdrive transmission (including manual versions). The system is easily reversible and doesn’t require any modifications to the transmission tunnel. As Gear Vendor’s Rick Johnson told us, “It’s also important to some, and cool for all, that from a collector standpoint, the correct three-speed auto is retained in the car. Gear Vendors installs in most cars with no modifications, so the car is actually worth more with this trans combo than with a late-model overdrive trans swap. If you look on eBay you’ll find 10-plus-year-old Gear Vendors sell for right around what they sold for as new. We explain to people that it doesn’t really cost you anything to buy a Gear Vendors overdrive because it adds so much performance and saves fuel. Also, the whole engine, valvetrain, and accessories all get to slow down and last longer. If you ever sell the car, the single biggest item a buyer is willing to pay more for will be our overdrive unit.”

Johnson went on to explain, “Imagine you have a 3.55 rear gear. When you take off in First, you have around 8.80 torque multiplication (engine turns 8.8 revs for every tire turn). If you shift to Second it drops way down to just 5.30 multiplication, which is as tall as many drag cars are in high gear, and you’re only in Second. By using the unit to split gears, you can go to First Overdrive and your multiplier will be about 6.85, which is the same or better than a guy with 4.56 rear in Second gear. So, even under half throttle your car will perform better since you now have a close-ratio transmission. Now when you shift to Second, and turn off the Overdrive, the ratio is much closer and the torque converter stays hooked and the engine rpm stays up in the powerband. This ratio splitting is exactly what all the new automatic OE transmissions, that have five or more gears, are doing. If you take two overdrive gears and two underdrive gears, you can make six, seven, eight, or nine ratios. Your classic three-speed has two underdrive gears and one direct drive, so a Gear Vendors, due to the ability to split gears, is going to give you a total of six gears.”

But, the main benefit is how the unit applies overdrive to the top gear. With a final overdrive ratio of 0.778:1, your Camaro will go 28.6 percent faster down the highway than it would without the overdrive. To find out how much it will drop your rpm, just take 0.778 and multiply it by the rpm. For example, if you’re turning 3,500 rpm, and click the Gear Vendors on, the rpm will drop by 777. Gear Vendors feels this is the perfect amount to stay in the powerband and still get better fuel economy. You end up with what amounts to Fifth gear in a typical manual transmission. This gives you the lion’s share of economy without all the problems associated with trying to eke out another 2 percent mpg. To us, the cool side benefit is being able to treat our old TH350 like a close-ratio manual. But, the real benefit is the ability to cruise down the highway, comfortably, at over 70 mph. After spending some time in our ’67, we believe Gear Vendors’ claims of a 25 percent improvement in economy. Also, after some practice, we were using the shift-knob-mounted switch to split gears like a pro. We could see how this would really be of benefit on an autocross or road course, or even a mountain road for that matter.

01. This was the starting point. Our ’67 cruiser has been rockin’ a 383 stroker small-block backed up by a TCI TH350 trans. It’s a great combination, but with 3.50 gears in the differential, cruising down the highway is a pain without an overdrive gear.

03. After pulling the driveshaft, we removed the speedometer gear, and then pulled the rear housing off the tail of the TCI TH350 transmission. It was held on by four bolts.

04. This was the result. On the TH350 we didn’t even have to support the trans or remove the transmission mount.

05. Here’s the standard-length aluminum Gear Vendors adapter. It bolts on to replace the rear housing we just removed.

06. As you can see, there is plenty of clearance in our stock transmission tunnel. There is a certain way it needed to be clocked, so we consulted the highly detailed instruction manual and bolted it to the back of our TH350.

08. With the green gasket in place, we used a straightedge to see if any shims would be needed in the coupler. Turned out we needed just one.

09. To get the main overdrive unit in place, we had to unbolt our Dynomax exhaust system from our Hooker headers. This allowed the system to drop down a few inches, giving us the needed clearance.

10. This is the main player in the Gear Vendors kit. The units carry a full two-year warranty (even if you’re racing). And to lessen downtime, send back your core and they’ll send you a replacement. Even after the initial full warranty, the units are covered by a “limited lifetime” warranty. If one does go bad, even out of warranty, Gear Vendors will replace it for one-third the cost of a new kit. In short, they stand behind their product.

11. And here you can see the unit installed in the car.

12. The problem we had now was that the X-pipe on our existing exhaust system was hitting the overdrive unit. One option would have been to modify our stainless pipes, but Gear Vendors had a better idea.

13. They offer several different lengths of adapters for the TH350. On the left is the standard-length version. It’s great if you have a non-X-pipe exhaust system, stock exhaust, or are going to do a custom system later. The adapter on the right is 2.5 inches shorter, but it requires modifying the output shaft on the TH350. There is an even shorter adapter, but it requires replacing the output shaft on the TH350. All of the units have their own unique coupler.

14. After doing some calculations, we decided the medium-length adapter would give us the necessary clearance. It required lopping off 2.5 inches from the output shaft of the transmission. We measured twice and then marked the shaft with a zip tie.

15. The output shaft steel is fairly soft, so we able to easily trim it down with a cutoff wheel.

16. The new, shorter adapter was then bolted to the TH350 transmission.

17. Just like before, we then installed the coupler and used a straightedge to see if any shims would be needed. In our case, the careful measuring paid off and we didn’t need any.

18. We then installed the Gear Vendors overdrive and secured it using the supplied fasteners.

19. As you can see here, there was plenty of room around the unit in our trans tunnel. This is one reason why the system is so popular with the restoration guys who don’t want to hack up their factory sheetmetal. To double-check fitment before buying the kit, call Gear Vendors and they will send you a file so you can print out a paper template.

20. With the mechanical parts installed, it was time for the electronics. The kit came with a brain box, foot-activated switch, speedometer gear, and a gizmo for converting the speedo revolutions to an electronic signal.

21. The speedometer gear was selected based on our rear gears and tire height.

22. For our early Camaro application, the kit included this 90-degree speedo fitting, which is needed due to the close proximity of the trans tunnel wall.

24. Our ’67 is currently gutted, so we attached the unit to the floor using Velcro directly behind our pedals. Once carpet gets put in, it won’t be seen yet will still be easily accessible. Wiring the system was easy since the cables were color coded.

25. We also had to send our existing driveshaft out to be shortened. The instructions detailed how to measure, based on your transmission and rearend, so that the driveshaft will end up being the right length.

26. As you can see, the 2.5-inch shorter adapter fit perfectly and cleared our exhust system. After re-calibrating the speedometer, we hit the road. We loved the unit and how we were able to drive with the traffic flow (about 70 mph) without feeling that our 383 was revving itself to death. After running though half a tank of fuel we found that our ’67 was getting about 23 percent better mileage. Lastly, we hit our favorite twisty road and tried out gear splitting. It took some practice to get our timing down in regards to shifting, but eventually we were as smooth as silk.