We revisit Aaron Schoen’s homebuilt turbo Silverado to see what ported heads, lower compression, and an optimized turbo cam will do at the rear wheels. 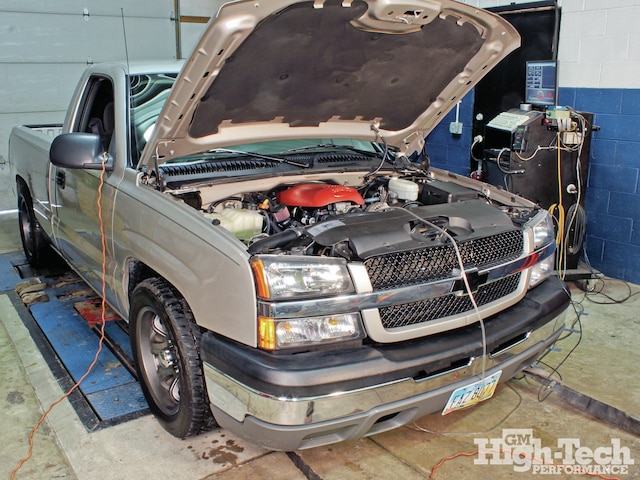 In the May 2010 issue we introduced Aaron Schoen and the scratch-built turbo system that powered his Chevy Silverado short-bed truck. The system emulated the remote-style design popularized by STS Turbo Inc., with a Garrett T61 turbocharger mounted under the bed. It blew about 12 pounds worth of boost into a 5.3L engine wearing LQ4 heads and turning an LS1 camshaft. That home-built hair-dryer combination didn't employ an intercooler, but Schoen crafted his own methanol injection system – using a pump from Snow Performance, a salvage-yard coolant overflow tank and a Hobbs switch – to cool down the intake charge ahead of the throttle body. The truck put down 466 horsepower and 533 lb-ft of torque to the rear wheels on the Mustang chassis dyno at Norwalk, Ohio-based CRT Performance – enough to send the heavy Chevy truck down the quarter-mile in a traction-limited 12.9 seconds at 114 mph. It was impressive performance for a setup literally assembled with about $1,500 in turbo/salvage parts and interchangeable GM components in his single-stall garage space in Schoen's old apartment complex.

Fast forward a few years and we're back in Ohio to revisit Schoen's Silverado. After replacing the 5.3L engine about a year and a half ago with a used, yet all-stock, LQ4 6.0-liter truck engine and swapping the original 4L60E transmission with a beefier 4L80E, he's looking to up the output of the powertrain. The current 6.0-liter makes nearly identical rear-wheel output to the 5.3L, except with a much more conservative tune-up. For the next stage of the build, Schoen was intent on adding power while stick with a safe and reliable setup.

To start off, Schoen elected to beef up the engine's cast internals with forged rotating parts for insurance. Mahle 4.030-inch, 2618 alloy pistons and Lunati H-beam rods would give him the confidence he needed to crank up the boost and lay into it with confidence. In addition, the Mahle pistons would help effectively lower the compression that would allow more ignition timing and more boost. For the heads, stock GM 317-casting heads were sent to Total Engine Airflow in Tallmadge, Ohio, where they were given the once over by its CNC machine. The 317 heads were used on the high-performance LQ9 6.0-liter engines found in the Silverado SS, Yukon Denali and some pickups. They were also used in some later-model LQ4 applications. What makes them an especially good choice for a force-inducted engine is they are based on the high-flow LS6 head, but with a larger combustion chamber volume of around 70-72cc vs. 64-65cc. With the Mahle pistons, the compression ratio would be around 9:1 – perfect for a boosted street engine. Total Engine Airflow's port work opened up the 317 heads to flow 286 cfm on the intake side and 243 cfm on the exhaust side (both at 0.600-inch lift) – a significant airflow improvement of more than 12 percent on the intake ports and nearly 33 percent for the exhaust ports. Those greater flowbench numbers should deliver an exponential improvement on the engine under boost.

For the camshaft, Schoen selected the bigger of the two LSR turbo cams (PN 54-481-11) offered from Comp Cams, delivering 235 degrees of duration on the intake side and 231 degrees on the exhaust side, with a 115-degree lobe separation angle (LSA) and .621/.617-inch lift. The relatively unique duration specs and lobe separation specifications are perfectly suited for a turbocharged engine and COMP promised this grind would really shine under higher boost. [See the sidebar story for more details on turbo cam selection.]

Break in oil and a safe tune was used for some street time to break in the motor. However, when we met Schoen back at CRT Performance for fine-tuning and power pulls he had swapped out the oil for Rotella 10W40 (later he'll switch to synthetic). As with its previous iteration, the engine still uses a speed-density operating system with a 2-bar MAP sensor (on the stock engine controller), which is calibrated with HP Tuners. Schoen prefers it over a stock-type mass-air system for the tuning flexibility with higher boost, and a stock MAF sensor typically supports only up to 10 pounds of boost. Regardless of the air metering system, a 2-bar (or higher) MAP sensor should be used in any force-inducted engine running more than that. On the dyno, CRT's Jeff Chambers started slowly and safely with the new engine combination, running the engine only up to about 4,000 rpm on the Mustang dyno at first. The initial runs were appropriately fat with fuel, with total timing of 16 degrees. The oil was checked after each step upward in the calibration and periodically, a spark plug or two was pulled to check for signs of clean combustion and, more critically, signs of detonation.

With all signs good, Chambers kept creeping up on the tune, adding timing and taking out fuel incrementally. He also experimented with the methanol injection system disconnected, confirming a nearly 100-degree reduction in intake charge temperature when spraying into the intake tube (activating at 8psi). That lower intake temp enables more aggressive tuning while using lower-octane fuel (all of the dyno pulls with Schoen's truck were made with premium pump gas). The only caveat is you have to remember to check the methanol/water mixture (or water-diluted windshield washer solvent). Running out while driving – especially under boost – is, to put it mildly, not good.

The more aggressive tuning was definitely paying dividends, as the truck's output crept ever closer to the 500-rwhp Schoen had aimed for. Along the way, it was clear from the dyno pulls that the head and cam were not only contributing to greater power, they were sustaining the horsepower and torque curves beyond the stock components. This was not the case a couple years ago when he tried a larger cam swap on the original 5.3-liter. Expecting big gains, Schoen actually lost more than 38 lb-ft of torque, while only gaining 10 peak horsepower. Bigger is not always better.

In the end, with 21 degrees of total timing, the turbocharged Silverado laid down 506 horsepower and 535 lb-ft of torque to the rear tires at the same 12-pound boost level as the original tests. The 40 additional horsepower represented an increase of more than 8 percent, which ain't bad at all. And although the 2 lb-ft of increased peak torque was essentially a flat comparison with the stock heads and cam, it doesn't tell the whole story. In this case the optimized camshaft really helped fatten up the torque curve in the heart of the RPM band. Making identical torque at 4,500 rpm – which was peak for the stock engine – the heads and cam produced an additional 40 lb-ft of torque at 5,300 rpm, even after the engine had already peaked at 4,700 rpm. The combination showed its benefit the higher the RPM climbed. The peak power was achieved at just a tick under 5,400 rpm, but held that peak to 5,700 rpm, whereas the stock heads/cam had totally nosed over after 5,000 rpm – where the peak horsepower was achieved.

An argument could be made that while significant, the 8-percent greater horsepower didn't exactly set the chassis dyno on fire. It also seemed obvious that the higher-flowing LQ4, with its more voluminous cylinder heads and boost-loving cam, might benefit even more significantly with more pressure. And since the truck wasn't spitting out fluids or hard parts after the 506-rwhp pull, Schoen decided to pull out the stops – and the plug on the boost controller – to see what a few extra pounds of air pressure would do. It was clear the engine hadn't peaked at the RPM levels used for pulls at 12 pounds of boost. Schoen eagerly wanted to add about 6 pounds of boost, but the light wastegate spring, and added exhaust pressure, only allotted for about 15 psi. Nevertheless, several runs were made up to 5,500 rpm with 15 pounds of boost and the three extra pounds made a tremendous difference: 559 rwhp and 590 rwtq for peak numbers – 93 horsepower over stock. Keep in mind: that's through the comparatively restrictive stock intake manifold and exhaust manifolds.

That was a very exciting discovery because, as expected, the peak numbers would be reflected in the added boost, but what was not expected was the largely broadened torque curve over the 12-psi tests. When compared against the stock engine's performance with 12 pounds of boost at 4,900 rpm and 15 psi at the same RPM, it jumped 88 horsepower and 93 lb-ft, while also adding 89 lb-ft and 90 horsepower at 5,300 rpm. Again, all of this while still maintaining the same low-end horsepower and torque numbers as of the stock cam. As long as a safe tune is maintained, the 15-psi threshold for the engine seems like a winner, although the 40-horsepower jump in power at the 12-psi level was certainly admirable.

With a larger intake and optimized runners, the benefit of the new heads and cam would likely have been greater, but that's all part of the discovery process when it comes to building power. And at the end of the day, Schoen added 88hp without being on the ragged edge like he had with the stock parts. Sure people have made 800-rwhp with a stock 4.8- or 5.3-liter, but for how long? Thankfully Aaron will never have to wonder about his Silverado.

Elements of an Optimal turbo Camshaft

This is the reason Billy Godbold, Valvetrain Engineering Group Manager at Comp Cams, says: "With turbo systems, you want to make sure the air is going the correct direction at intake opening. Your goal is to get as much air/fuel charge as possible into the chamber by the time the intake valve closes and not build up huge exhaust pumping losses." When selecting a camshaft Billy says, "you just need to consider what the forced induction system does very well and not-so-well. Then you can choose the cam to help accentuate the positive and (maybe more-so) to hide any negatives." With a street turbo engine then, you can design the cam "to be responsive at low to mid RPM as if it were N/A, then you can use the boost at higher RPM to extend the power range."

Check out this 2004 Chevrolet Silverado that features a LM4/LM7 block, Garret T61 turbo, Eibach springs, and more only at www.gmhightechperformance.com, the official website for GM High-Tech Performance Magazine!

Read the Chevy High-Performance tech article on How to Program an OBD-II Powertrain Control Module.

At first it seemed hard for us to believe, a supercharged Silverado with a warranty? Check out this tricked-out truck from Joe Gibbs.

The Review is in and the 2004 Chevrolet Silverado SS 1500 is noticeably quicker than a 5.3 Silverado with handling reminiscent of its predecessor the 454SS, but it could use 100 more horespower. - Super Chevy Magazine

GM had the entire lineup of vehicles to drive on the last day which included the Monte Carlo SS, esteemed SSR and the Silverado SS. - Super Chevy Magazine