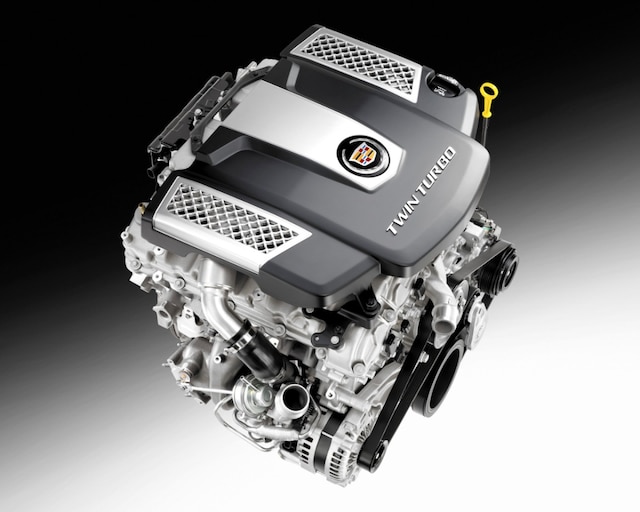 The 3.6L twin-turbo LF3 marks GM’s triumphant return to turbo V-6s. Set to debut in the 2014 Cadillac CTS Vsport midsize sedan and XTS Vsport full-size sedan, the LF3 offers an SAE-certified 420 horsepower and 430 lb-ft of torque on premium gasoline. While GM would prefer to compare this engine to its foreign counterparts, such as BMW’s turbocharged 6-cylinders, it is hard not draw comparison to the comparably powered 6.2L LS3 in the ’14 Camaro and SS sedan – much like the LC2 in its day.

Just as the LC2 in the ’86-87 turbo Buicks had cutting edge technology including Tuned Port Injection and distributor-less (individual coil) ignition, the LF3 boasts: Dual Overhead Camshafts (DOHC), four-valves-per-cylinder, continuously variable valve timing, and direct high pressure fuel injection. This technology is shared with the LF3’s predecessor – the 321hp naturally aspirated LFX, which is one of the other two engines available on the CTS as well as the Camaro. Clearly GM had boost in mind when it designed the LFX’s unique cylinder heads, which integrate the exhaust manifolds right into the casting. However, the LF3 boasts many improvements and upgrades over the LFX starting with the cylinder heads.

Starting at the top, the LF3’s unique cylinder heads feature what GM calls a “high-tumble” intake port that optimizes the quality of the airflow to work in concert with the piston design for a more efficient burn during combustion. The centrally located dish on the pistons directs fuel from the injectors, and makes the piston part of the chamber. “The high-tumble heads were developed with advanced modeling programs that helped us determine the optimal design in less time and with less trial and error,” said Richard Bartlett, assistant chief engineer for the 3.6L engine. “Literally hundreds of simulations were performed to optimize the port flow, injector spray angle and pattern, and piston topology to produce a highly efficient yet powerful combustion chamber."

The heads were also treated to larger 38.3mm intake and 30.6mm sodium-filled exhaust valves. The improved flow through the valves along with the variable valve timing system, using overlap, promote better scavenging to help spool the turbos quicker. Of course the intense heat from the turbos necessitated a number of other upgrades to the engine including hardened AR20 exhaust valve seats. Upper and lower water jackets were also added to the heads for uniform heat distribution and optimal rejection – especially nearest the turbos’ connection to the cylinder heads via the integrated exhaust manifolds. Meanwhile the heads are sealed to the block with a multilayer-steel (MLS) gasket design that will withstand higher cylinder pressures, and contribute to a lower 10.2:1 compression [note: this may still seem high, but that’s the beauty of direct injection]. New cam covers use an upgraded PCV system to keep the engine happy under boost.

The block casting displays a number of improvements in strength over the LFX, though it is still aluminum, as does the rotating assembly. Stronger connecting rods adjoin a forged steel crankshaft and the machined, domed pistons with a steel top ring carrier, polymer coating on the skirt and fully floating wrist pins. Oil squirters are integrated into the block to help cool the pistons and lubricate the cylinder wall. Even the oil pan has been beefed up to improve rigidity and reduce vibrations. And the block sports cast-in provisions for turbocharger coolant and oil connections.

Moving on to the turbo system itself, the GM Powertrain engineers’ mission seems obvious – eliminate turbo lag and make the engine as smooth and reliable as possible. As the result, a mere 12psi of boost would be manifested from a pair of small, Mitsubishi TD04 L6 turbos mounted directly to the cylinder heads. And then the engineers chose the shortest route possible to the engine by going with an air-to-water intercooler integrated into the intake manifold – using a twin-brick design similar to the TVS1900 supercharger on the Cadillac CTS-V’s LSA. Compared to a chassis-mounted heat exchanger, GM says this design reduces routing volume by 60-percent. To back up the effectiveness of the intercooler, GM also revealed that it provides 80-percent cooling efficiency with only a 1psi flow restriction at peak power. Bartlett stated the lower intake flow restriction and dynamic response as the biggest advantages of the air-to-water design over an air-to-air intercooler.

From an assembly and design standpoint, a traditional front-mount heat exchanger presents many challenges. And it appears the good far outweighs the bad with this new design. “By creating a very short path from the turbos to the throttle body, the compressors are able to draw air directly from the inlet box and send pressurized air through the intercooler immediately,” said Richard Bartlett, Cadillac assistant chief engineer for the 3.6L engine. “This gives the driver a more immediate feeling of power on demand… The LSA engine showed us the efficiencies of mounting the intercooler on top of the engine, especially when it came to packaging and maintaining a short, unobstructed path for the air charge. It’s efficient and effective – and we wanted to build on that experience.”

An immediate torque response is further fostered by the use of a single, centrally located throttle body that controls the air charge post intercooler. As the result, the design boasts a broad torque curve from 1,900 to 5,600rpm. An impressive 90-percent of peak torque is available from 2,500 to 5,500rpm. This type of power delivery makes the LF3 feel more like a naturally aspirated engine, rather than its peaky predecessors. The use of vacuum-operated wastegates, one per turbo, rather than pressure-activated, is yet another method of providing a more consistent and smoother performance across the RPM band. GM says these style wastegates allow better boost control, particularly at lower RPM for better low-end torque and seat-of-the-pants feel at low speeds. What’s particularly impressive is that each wastegate is independently controlled on each engine bank to deliver a precise and balanced response from each compressor. Factor in the recirculation valves to prevent surging (or backflow through the system when the throttle closes), and you have one smooth-running bullet.

It should also come as no surprise that the LF3 runs a very sophisticated electronics. Dual mass air flow sensors account for each turbo’s input with an integral air temperature/humidity sensor, and dual-compressor inlet pressure and dual manifold pressure sensors account for their output. And if all that didn’t sound complicated enough, how about we bolt that engine up to an 8-speed transmission. That’s right, eight – freakin’ – speeds. Despite a mere 2.85:1 rear gear, the Vsport will have no problem staying in the powerband with this double overdrive tranny that uses a short 4.60 First and 2.72 Second, followed by three close ratio gears prior to the 1:1 Sixth gear. At .69:1 ratio, Eighth gear keeps the turbo motor at a docile 1,800rpm at 70mph (200rpm lower than a six-speed), helping to knock down a 1.5-percent improvement in fuel consumption. GM emphasized that this trans uses “stronger gear sets and a greater number of clutch plates.” One has to wonder whether we’ll see more of this fancy slushbox.

You have to hand it to GM for giving its engineers license to raise the bar in nearly every facet of the LF3’s design. Gone are the penny-pinching days of yore, when it seemed all GM could do to try and keep up was slap in a larger engine stolen from another platform. If seeing 550hp CTS-Vs scream past you on the interstate, and claim multiple World Challenge victories, didn’t help dissuade the old stereotypes of the Cadillac brand – perhaps the 2014 Vsport will. My favorite part? This thing will make one heck of a crate engine for swaps like a new twist on the Grand National.

Will Dugas is one cool customer. Women want to be with him. Men want to be him. Read about how he goes about wheeling his 2012 Cadillac CTS-V down the track and you’ll know why. You’d think that manhandling a 9-second machine would be a fist-clenching, harness-tightening affair, but not for Will.