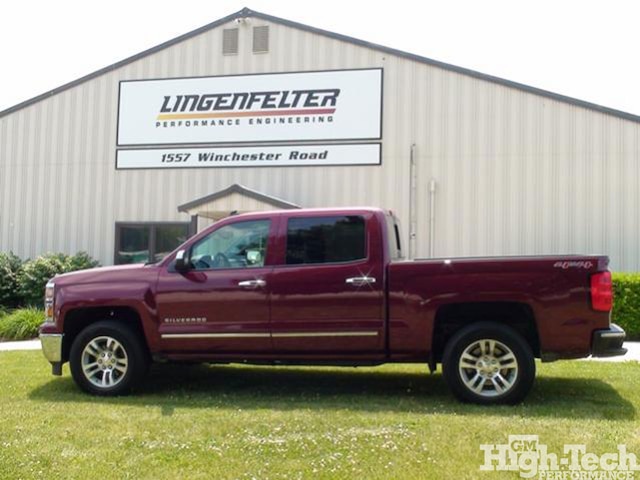 While many (including GMHTP) anxiously wait for the 2014 Corvette Stingray to be released, several tuners have jumped into the Gen V game by getting their hands on the 2014 Silverado and Sierra, which sports the same E92 controller as the C7’s LT1 to command the 5.3L L83. It should be no surprise that Lingenfelter Performance Engineering is not only among them, but way ahead of the game. We can’t wait to share what LPE has in store for its in-house 2014 Silverado 1500 and the C7, but in the mean time let’s take a look at this baseline testing.

Taking advantage of the ’14 model’s Flex Fuel capabilities, LPE dumped in some E85 and repeated its tests. The on-board sensor read 65% ethanol content, with 1/8 tank of E10 diluting the mixture, when the dyno read 321hp and 355 lb-ft of torque. This certainly seems in line with GM’s 380hp crank horsepower rating when using E85 (355hp on gasoline) as well as the subsequent acceleration tests. The 0 to 60 dropped to 6.96-seconds and the 1/4-mile time was nearly a half-second improvement (15.51 at 93.5mph). LPE recorded an average of 18.9-degrees of timing (up from 17.2 on gasoline), and a reduction in intake air temperature (7-degrees average) and engine coolant temperature (3-degrees average).

GM is investing $1.2 billion into its full-size truck plant as well as another $175 million in Camaro plant to build the redesigned 2016 model.

So what do you do when you have a low-compression small-block Chevy in your ride and want more power? Simple: Add boost.