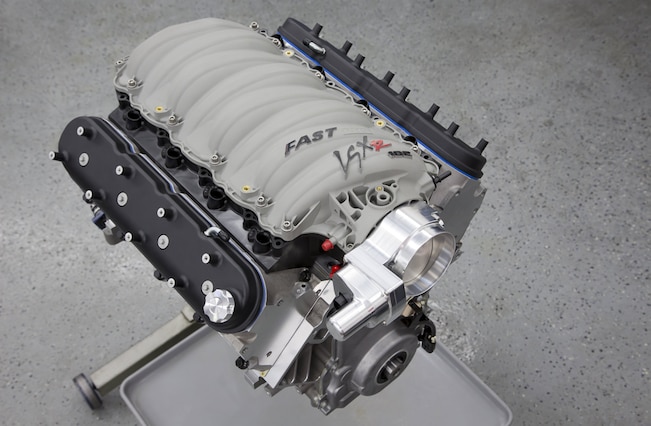 Being normal is overrated. Normal people don't rebuild their engines until they've logged hundreds of thousands miles on the ticker, but where's the fun in that? As cuckoo as it might seem to your average SUV-flogging conformist, there are plenty of good reasons for a premature rebuild. Perhaps you've gotten a bit too greedy with the boost or nitrous and chucked a piston, or maybe that missed shift spun a bearing or two. Fortunately, despite the sheer savagery that the 426 horsepower LS3 small-block already manifests in stock trim, it's still nowhere near maxed out. Throw in some extra cubic inches and airflow into the mix, and the result is an easy 622 hp on pump gas. It's only natural for impressive figures like that to elicit some skepticism, so Late Model Engines in Houston, Texas is going to show us how it's done.

While nitrous oxide kits and superchargers represent far easier ways to make silly heaps of power, there's just something ultra pimp about doing it all-natural with a big-inch stroker motor. Many engine builders contend that naturally aspirated engines are more reliable than their power adder counterparts. Plus, constantly refilling nitrous bottles can get annoying, and hanging a 100-pound brick off the front of a fifth-gen Camaro with a blower doesn't do much for its already hefty mass. Furthermore, in an era when the Feds insist on diluting fuel with corn juice, naturally aspirated motors are far less prone to detonation than power adder combos should you get stuck with a bad batch of gas.

Anyone can build a motor that makes big horsepower at the expense of drivability, but balancing out both extremes requires much more skill. Since few people plop down over $30,000 on a fifth-gen Camaro to transform it into an uncivilized bucking bronco, a thoroughly engineered engine combination like LME's 600-Plus LS3 package perfectly complements the car's refined character. "With any performance engine build, we focus on improving the cylinder heads. As airflow increases and the induction system becomes more efficient, you can use a mild camshaft and still make lots of horsepower," LME's Bryan Neelen explains. "When the LS3 first came out, people were over-camming them just like they did with the old cathedral-port LS-series cylinder heads. However, since the LS3's rectangle-port heads flow so much more air, they can make a smaller camshaft really shine. This approach results in a very broad powerband with excellent drivability, which is why the LS3 and LS7 have become such popular platforms to build."

As we all learned high school Geometry class, the base of a cylinder multiplied by its height determines its total volume. Since internal combustion engines are nothing more than glorified air pumps, and larger cylinders can ingest more air and fuel, increasing cylinder volume—and therefore engine displacement—is one of the best ways to increase horsepower potential. As long as the cylinder heads and intake manifold are up to the job, a larger motor will make more power and torque than a smaller motor at any given RPM. Fortunately, the LS3's big-bore block makes it incredibly easy to achieve displacement euphoria.

In just 15 years, the development of GM's Gen III/IV engine platform has progressed at a staggering rate. Early 5.7L LS1 small-blocks were limited in displacement due to their small 3.900-inch bores. Even with a 4.000-inch-stroke crankshaft, boring (or should we say - honing) the cylinders liners out as large as possible netted just 383 cubic inches. Although massive 4.125-inch bore diameters were possible by installing new cylinder sleeves, the process cost upwards of $2,500. Furthermore, re-sleeving a block yielded mixed results, and coolant leaks and poor cylinder seal weren't uncommon. Things took a big change for the better in 2005 with the introduction of the LS2's 4.000-inch siamesed-bore aluminum block, which allowed cracking the 400ci barrier when matched with a stroker crank.

Then in 2007, GM took things one step further with the 6.2L block introduced in the L92-powered Cadillac Escalade. Essentially the same block used in the LS3 and L99, it boasts an even larger 4.065-inch bore and makes big-block-like displacement affordable for hoards of late-model enthusiasts. Simply honing the bores out 0.005-inch and installing a 4.000-inch crank increases displacement from 376- to 416 cubic inches. To put this into perspective, the largest motor you could get in a regular production 1969 Camaro measured just 396 ci, and that was a big-block. "The 416 has become a very popular combination to build. When the 6.2L block first came out, it made it possible to build a large-displacement motor without spending a fortune on an LS7 block," says Bryan. "Even today, the 6.2L block offers the biggest bore size you can get for the dollar. Now that GM is installing it into fifth-gen Camaros, the 416 is getting even more popular."

To transform a stock 376ci LS3 into a 416, LME starts by finish honing the block from 4.065- to 4.070 inches. It then installs a fully forged and internally balanced rotating assembly that features a Callies/Compstar 4.000-inch stroke crankshaft and 6.125-inch connecting rods, and Wiseco 11.7:1 pistons. "You can certainly spend more money on pricier cranks and rods, but from our experience, the components that we use offer the best value," Bryan explains. "A rotating assembly that's more expensive isn't going to make any more horsepower, either. On the flip side, you can also build a motor with a less expensive rotating assembly, but it comes at the expense of reliability."

Speaking of price, the LME 600-Plus 416 stroker motor will set you back $11,500. That price is even more affordable if you provide your own core block and heads. If you like earning your lunch money on desolate roads at night, a great perk of a stroker small-block is they don't look much different for a stock motor on the outside. Potential victims will have no idea you're packing an extra 40 cubic inches.

1.
To prep the LS3 block for stroker duty, LME hones the bores 0.005 inches, cuts the deck surfaces down to 9.225 inches, and then align-hones the mains. All sharp edges are also de-burred to stress relieve the block and reduce the potential for cracks.

2.
The bulk of the displacement bump in the LME 416 comes from increasing the stock 3.622-inch stroke to 4.000 inches with a Callies/Compstar forged steel crankshaft. It features drilled rod journals for improved oiling, and counterweights that have been profiled for piston skirt clearance.

3.
When increasing the stroke of an engine, rod-to-camshaft interference can become an issue. To prevent this, the Callies/Compstar H-beam connecting rods have profiled shoulders for additional clearance. They swing a set of Wiseco pistons that maintain a 1.110-inch compression height when matched with the 416's big stroke and long rods. Wiseco's ArmorGlide skirt coating improves lubrication, reduces friction and piston rock, and allows for tighter piston-to-bore fitment.

4.
With the crank secured in the block, LME gapped the top piston ring (from Total Seal) to 0.014 inch and the second ring to 0.018 inch. The larger second ring gap allows combustion gases that slip past the top ring to escape into the crankcase instead of unseating the top ring and compromising ring seal.

5.
Sliding the pistons in the bores and bolting the rods to the crank reveals the amount of real estate available inside the LS3's crankcase. Since a stroker crank pulls the pistons farther down the bore, the rod bolts will often hit the cylinder sleeves or oil pan rails at bottom dead center. The bottom of the LS3's cylinder sleeves are undercut from the factory, making it possible to fit a long-stroke rotating assembly without grinding the block for clearance.

6.
Actuating the valves is a custom Cam Motion 235/250-at-0.050 hydraulic roller camshaft with 0.646/0.642-inch lift. That's a lot of lift for a small-block, but it closely correlates with the peak airflow figures of the cylinder heads to maximize power potential. The cam's wide 114-degree LSA improves idle quality and decreases the rate of drop-off after peak hp.