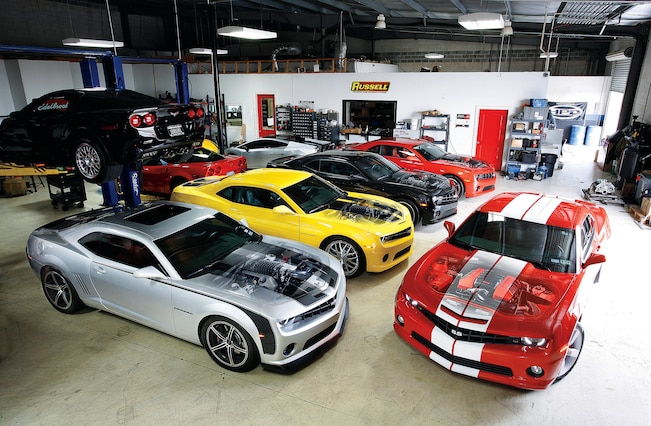 People stuffing their faces at the pizza joint next door haven’t a clue what’s going on. In an unassuming strip mall in Houston, as the creamy alfredo sauce dribbles down the chin of yet another obese American, Late Model Racecraft is building the fastest LS-powered machines on the planet. LMR’s shop car, a 2,500hp fourth-gen F-body, rips 7.24-at-209 mph quarter-mile passes on a stock-style suspension and drag radials. The LMR crew has also made a habit of dominating the Texas Mile, having run 246.4 mph in customer Kelly Bise’s twin-turbo 2000 Camaro SS. With this apparent emphasis on all-out race cars, you might assume that LMR doesn’t even bother building street cars, but that’s simply not the case. By combining its know-how from the racing arena into its street cars, LMR builds some of the meanest late-models that have ever been turned loose into the asphalt jungle.

With the explosive popularity of the fifth-gen Camaro, there’s always at least a half-dozen of them inside LMR’s shop doors on any given day, so let’s just say they know these things inside and out. After all, this is the same shop that built the world’s first 9-second 2010 Camaro. To make things easier for shoppers, LMR has compiled a decadent menu of performance packages ranging from simple 50hp bolt-on upgrades to 900hp nitrous’d stroker motors. All you have to do is decide how much power you want, drop off your car, and then light up the meats for two blocks after the installation is complete.

To find out what goes into each of LMR’s fifth-gen Camaro packages, we took a trip down to the shop to check them out up close. The entry-level Street Stalker package includes an LMR cold-air induction system, stainless steel 1.875-inch long-tube headers, high-flow catalytic converters, and a custom dyno tune. For an out-the-door price of $3,299, this bumps the hp total up to 475. Want even more power? No problem. By using the components from the Street Stalker package as a solid foundation for airflow, hundreds of extra horsepower can be added from a bevy of different menu options.

Sure, the 50 hp that the Street Stalker package gets you over a stock LS3 is substantial on paper, but stomp the gas a few times, and you’ll already be numb to the extra grunt. That’s where the Slayer package comes in. Everyone already knows that the factory LS3 and L99 camshafts are tiny by performance standards, especially considering the phenomenal flow of the LS3 cylinder heads. To remedy this shortcoming, the Slayer package includes a custom camshaft that bumps output to 530 hp (462 at rear wheels) while retaining stock-like drivability. This is on top of the cold air intake, American Racing headers, high-flow cats, and the custom tune that come with the Street Stalker package. Other supporting mods include NGK spark plugs, MSD plug wires, a 160-degree thermostat, an underdrive pulley kit, and a factory exhaust system modified for maximum flow.
3/34
7/34

Just when you think your SS is sitting pretty on top of the fifth-gen totem pole, GM launches the incredible 580hp ZL1. Fortunately, you can out gun the new LSA small-block with LMR’s Reaper package while keeping things naturally aspirated. The recipe is simple. Take all the goodies from the Slayer package, then add a set of CNC-ported LS3 cylinder heads that flow an impressive 360 cfm. Other upgrades include ARP head bolts, Comp Cams pushrods, and custom “Reaper” badging. A Fast intake manifold is optional. For $9,999, the result is a cool 600 hp (504 at rear wheels) without having to rely on a supercharger. Considering that the ZL1 costs $25,000 more than an SS, the Reaper package offers a far more economical way to make just as much power. Take that, ZL1.
9/34
13/34

Even someone who just crawled out of a cave will tell you that superchargers are incredibly popular upgrades for fifth-gen Camaros. It doesn’t take a genius to figure out why. With cylinder heads that flow like mad, all it takes is a little bit of boost to make a ton of power. As such, LMR offers the option to add a Magnuson TVS 2300 supercharger to any of its fifth-gen packages for an additional $9,999. At just six psi of boost, the result is an extra 150 hp. On a car already equipped with a Slayer package, that brings the hp total to 750 (635 at rear wheels). The blower kit includes the supercharger assembly, an air-to-water intercooler, fuel rails, injectors, and pulleys.
15/34
19/34

This is where things start getting out of control. Throwing a supercharger on top of an already potent Reaper-enhanced Camaro nets a conservative 750 hp. We say conservative because while LMR rates the Twisted Reaper at 750 hp at the crank, it actually lays down 701 hp at the rear wheels. That kind of grunt is good for solid 10-second e.t.’s, despite the fifth-gen’s hefty weight. Peak horsepower numbers aside, the true benefit of roots-style superchargers is the tremendous bump in low- and mid-range torque that they offer. Plus, since they fit underneath the stock hood, no one will know the kind of heat you’re packing until it’s too late.
21/34
25/34

For the ultimate in naturally aspirated power, the Punisher is king. The upgrade package essentially swaps out your stock LS3 or L99 for a built 440ci LS7. The combo is based on a factory LS7 block fitted with a Callies 4.125-inch crank and rods, Wiseco pistons, a custom hydraulic roller cam, a Roll Master timing set, ported LS7 cylinder heads, and a port-matched Fast intake manifold. Of course, long-tube headers, an LMR cold-air kit, underdrive pulleys, and a custom tune are part of the package as well. For manual transmission cars, LMR will also throw in a twin-disc carbon clutch. The result is 700 hp (600 at rear wheels) on motor, and 900 hp (764 at rear wheels) with an optional nitrous kit.
27/34
34/34