A Bumpstick Swap and a Set of RHS’ New Heads Make a Truck Motor Really Haul. 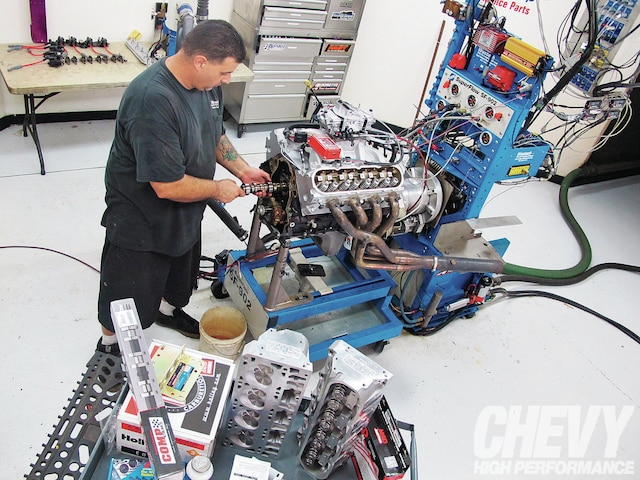 It didn’t take long for gearheads to figure out that GM’s Gen III truck engines are a great bang-for-your-buck buy for transplantation into a classic muscle car. There are differences, of course, but these powerplants are essentially iron Corvette motors, waiting for a few well-chosen upgrades to turn them into slick street machine motivators. That’s pretty much what we did here—found a truck motor that’s destined to reside in the engine bay of a ’66 Chevelle, and outfitted it with a new COMP Cams camshaft and a set of RHS’ new Pro Action cylinder heads with Clean Cast Technology, which is designed to create “as cast” ports that flow like those in ported heads. The results were impressive—and impressively inexpensive, to the tune of a measly $1,470 clams for a fully assembled pair of lungs. Yes, you read that correctly. Now read on.

The foundation for this project was a 6.0L LQ9 powerplant. This variation of the Gen III family was found in ’02-06 Cadillac Escalades, ’03-07 Chevrolet Silverado SS models, ’04-05 Silverado and GMC Sierra “Vortec HO Editions”, and ’06-07 Silverado and Sierra Vortec Max optioned vehicles. The LQ9 achieves its factory-listed 345 hp and 380 lb-ft of torque by incorporating flat-top pistons to create a 10:1 compression ratio, compared to the 9.4:1-compression LQ4’s 300-325 hp and 360-370 lb-ft of torque. Most importantly, these things can be had cheap. We found one on eBay, complete with harnesses, computers, and a warranty for $2,500. Locally, we’ve found them for half that. You can start a muscle car project with a complete, running engine for as little as $1,200, which is hard to beat.

Our first modification was to scrap the factory intake manifold and fuel-injection system for a simpler and proven carbureted setup, featuring an Edelbrock LS1 Performer RPM intake manifold, MSD 6LS timing module, and a Holley Ultra Street Avenger 770-cfm vacuum secondary carburetor. This is a quick install that we’ve covered before; it works and it’s where we started our day’s testing at Westech Performance. The initial results were what you’d expect from a factory truck motor: lots of torque (400-plus lb-ft all the way to 5,400 rpm), not much in the horsepower department (416 peak ponies at 5,700 rpm, where the stocker is done revving). It’s made to haul loads of whatever at uninspired speeds, not for street/strip warrior duty.

The second modification is certainly the most important: a cam swap, which gave this engine a total personality transplant. “The Gen X engines seem to respond to cam changes so favorably that even the smallest cam can make a big difference,” Westech’s Steve Brulé says. “The heads are so efficient; they’re just waiting for a cam change.” Our testing certainly proved that point, but we were still surprised when we found the stock cam specs on LS1Tech.com; can you say broomstick cam? A switch was in order, though restraint was needed. The LQ9 has flat-top pistons, so attention must be paid to lift and duration when choosing a cam so proper piston-to-valve clearance is maintained. That being said, the cam of choice turned out to be a COMP XR281HR, a piece from the company’s XFI RPM Hi-Lift line. Though COMP does make bigger cams that will fit this application, these ’sticks are still aggressive for an LS application. Which in this case is a good thing. The transformed truck motor recorded a sharp increase in horsepower, as you’d probably expect. It also makes its 495 hp up at 6,300 hp—right around the place a Corvette engine touches its best. Perhaps less expected, however, is the much fatter torque curve, which peaks at a lower rpm (460 lb-ft at 5,100 rpm), and spreads its grunt over a much broader range. It’s a testament to how critical cam choice is, and also to how good the factory heads are. We could have quit here and had a very powerful and cool street/strip powerplant. On the other hand, there was no way we were leaving any ponies on the table.

For our final test, we bolted on a set of RHS’ new Pro Action cathedral-port heads for LS applications. These new lungs, which use Clean Cast Technology to maintain more precise tolerances than are normally found in an “as cast head”, bumped our engine’s compression ratio up to 11.41:1 (due to its 62cc combustion chamber) and added a 225cc intake runner. The extra air and bump in compression allowed our transformed truck engine to really take off, recording 521 hp at 6,300 rpm, along with 476 lb-ft of torque at 5,000 rpm. If the engine is turned on, it’s making more than 400 lb-ft. That’s a total increase of 105 hp more than the carbureted stock long-block version, along with an extra 37 lb-ft of torque at the peak of a much fatter torque band. It’s also a 16 lb-ft and 26hp improvement over the stock lungs. This rejuvenated truck lump makes lots of useful torque throughout the powerband, and it now has a great top end. It should make for one snappy, fun-to-drive Chevelle. We’ll let you know.

Stuff to make it fit

Looking ahead, we had many of the pieces that we’ll need when this mill takes up its new residence under the hood of a ’66 Chevelle. One of these is Holley’s new LS Retro-Fit oil pan. According to Holley, this slick casting provides maximum chassis clearance for GM rear-wheel-drive applications, small-block or big-block, as long as it came with a rear sump oil pan. It also comes with a sump baffle, pickup tube, sump plug, oil filter stud, and an oil passage cover.

More stuff to make it fit

When it comes time to drop this newly possessed powerplant into its new home, we’ll also need a way to connect the modern Gen III engine to the old-school Turbo 400 trans our Chevelle will be running. For this, we sourced TCI for one of its 168-tooth internal balance flexplates. This stout piece is 0.035-inch thicker than stock, and the starter ring is welded to the plate on both sides for increased strength.