How To Build A 525ci Big-Block - Big-Inch Punch 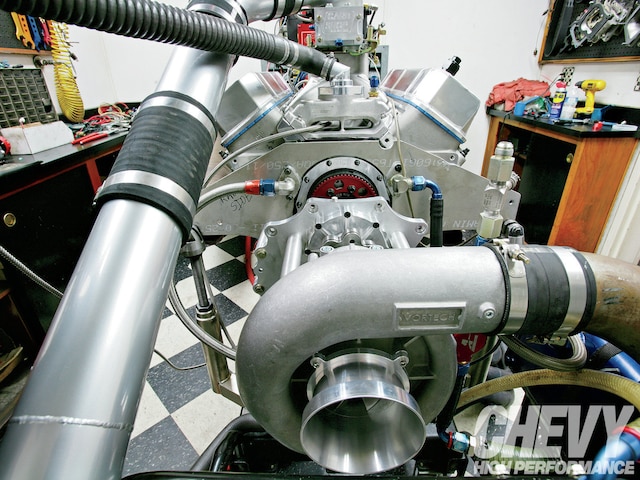 The last time you saw our Dart-based 454ci big-block, we generated 965 hp and 877 lb-ft (“Off-The-Shelf Steam” Apr. ’11 issue). For induction duties we used a pair of Brodix CNC oval-port BB-3 332 Xtras and a Brodix HV 2000 manifold, while a Vortech YSi supercharger added the artificial atmosphere. Fueling the copious amount of air was a Carb Shop–modified Holley 750 carburetor.

For round two of our build, Vortech Engineering offered to let us try out its latest line of superchargers, namely the all-new V-28 123. This wild piece of hardware is good for impeller speeds up to 70,000 rpm (rumors say significantly more), it features a 123mm billet impeller, and the peak power level is still yet to be determined. Knowing it would take a fairly stout bottom end, we decided to transform our 454ci into a 525ci stroker, using a complete Lunati bottom end consisting of a Pro Blower series crankshaft with their 4340 fully machined I-beam rods, and a set of JE pistons. For induction duties, we once again turned to Brodix and after a lengthy conversation, stepped up to the larger BB-3 380 Xtra cylinder heads. At the heart of the beast is a COMP Cams–built solid roller that we had spec’d out by Steve Morris Engines in Muskegon, Michigan. At The Carb Shop’s advice, we also stepped up to its 950-cfm carburetor with the dual needle and seat assembly.

The amount of power this gem was going to produce was seriously anyone’s guess. In our minds, we were shooting for anything over 1,500 hp and even scoured the ’Net looking for similar combinations. The truth is, at the time there were very few people with access to the V-28 123. If you recall, back in the July issue, we featured Chris Kephart and his ’62 Outlaw-classed Impala. Kephart has been at the forefront of testing the V-28 123 and is the first person to eclipse the 200-mph zone. Following suit, Chris Alston Jr. recently installed one into his ’64 Chevy II and shocked the doorslammer scene by becoming the first Vortech-powered car to dive into the 6s, running 6.71 at 213 mph right off the trailer!

It’s pretty evident to us that Vortech is onto something here, and we wanted to produce our own real-world evaluation, continuing with the off-the-shelf premise: no one-off components, no proprietary cylinder head porting, and—to challenge ourselves a little more—we wanted to generate a lot of boost through a single 4150 carburetor. It may have sounded like we were asking for trouble, but in all reality, it turned out to be one of the easiest big-horsepower combinations we’ve ever put together. Ridiculous? Even a bit arrogant? But it really was that easy. That’s not to say we didn’t run into our own issues, but these were things that were easily overcome; all of which we’ll go into greater details in the following pages.

Now, if there was one idealistic theme we wanted to stick with, it was to use the same manufacturers from the previous build with the addition of T&D shaft-mount rockers for valvetrain stability and Component Drive Systems’ geardrive to eliminate any belt issues. You have to hand it to our aftermarket; they offer top-notch components to support everything from a mild street package to dedicated track-only applications.

At the end of the day, we surpassed our goals and have to wonder, is this not enough power? Doubtful. Is this more power than most will know what to do with? That’s probably a bit more true. There’s nothing wrong with either answer, but chances are, our 525ci isn’t much different than what’s powering your street/strip project. However, it’s pretty amazing how easily a supercharger can conjure up a Jekyll and Hyde shift in demeanor on demand. Even better, everything shown here is currently available and only a phone call away.

A shaft-mount rocker system’s job is to provide valvetrain stability in the upper-rpm range; however the added benefits can also result in a gain in horsepower by minimizing movement. While that may seem fairly obvious, we also learned that T&D Machine Products offers a variety of options to custom-fit any combination. Once we spelled out our goals, T&D recommended that we add the following options: First, the spring oil holes (PN 0720), measuring 0.040 inch and placed on the bottom side of the rocker. During the lift cycle, it’s constantly oiling the springs, helping to extend the spring life. The second option was the needle bearing tips (PN 0731); these feature 23 needle bearings in the roller tips and are recommended for high-lift applications and for endurance. Lastly, the steel rocker option (PN 0727); these are built out of billet chromoly, offering minimal fatigue with incredible strength in a lightweight construction. If you’re looking for a set for your mill, it’s definitely a good idea to call T&D directly.

If we had one issue, it was not having a large enough air-to-water cooler. Since our geardrive was spinning the Vortech V-28 123 at its maximum recommended rpm, we were expecting to see boost levels at around 35 psi. Only, this wasn’t the case, and we were seeing 25 psi at best. To locate the pressure drop, we placed boost sensors before and after the air-to-water cooler and found an 11-psi difference. Interestingly, we were averaging 30-40 hp per 1 psi of boost, which tells us there’s a good chance we can still gain anywhere from 330 to 440 hp with an appropriately sized cooler. We’re pretty pleased with the results for the time being, but you can bet we’ll get our hands on the bigger cooler and see if our theory stands true. CHP