A Stock LS1, An Engine Dyno, And The Largest Camshafts We Could Get Our Grubby Little Hands On . . . 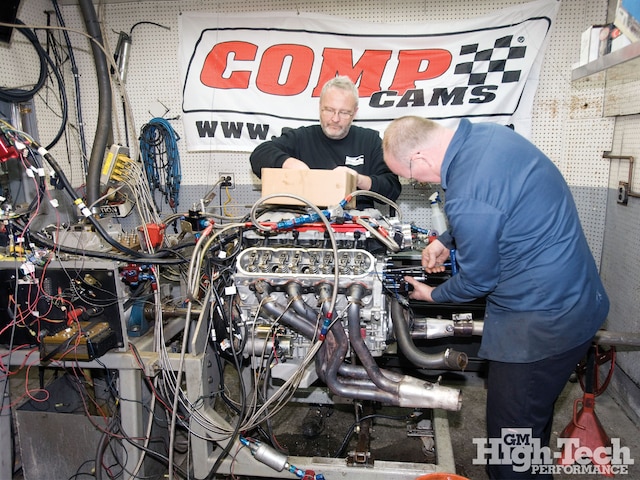 "Streetability" be damned-this is an all out, big boy camshaft test for the diehard LS1 crowd. Our rules were simple: If it fits in a stock LS1 and you keep it on the shelf, we want to test it. Can it idle in gear with the A/C on? Who cares! This is a test for people looking for maximum power, torque, and brute force, without any compromises. Whether you're a hardcore drag racer or an internet chest thumper, the question of "what would happen if . . . " has probably crossed your mind, and we're here to try and figure it all out. Granted, testing camshafts for the average daily driver, like many of us, has its place, and we love doing in-depth testing on camshafts for those situations ("Battle of the Bumpsticks," Nov. '09 issue), but for the next couple of issues, our concern will be maximum power on a stock LS1 bottom end. Are these for everyone? No. Are they even a good idea on most streetcars? Maybe, maybe not, but that isn't our current concern.

After weeks of phone calls, meetings, and bench racing sessions, we contacted several companies about our test. For some, our all or nothing approach seemed a little strange, but to others, like Comp Cams and Vengeance Racing, the camshafts couldn't ship fast enough. We also decided to team up with Bob Wise and the crew at RaceKrafters in Lancaster, Pennsylvania, to make sure our testing was accurate, repeatable, and consistent. It didn't hurt that Bob was an old racer with a serious passion for quality testing, and once we got going, Bob was able to interject some excellent "side tests," which we will also feature as we go along. On the following pages, you will find the results of each camshaft versus the stock LS1 and notes on each test. If you're thinking about a cam swap or you're already running a large camshaft, most of the data here should be of interest to you. For those advanced readers, we have found some interesting nuances with lift, LSA, and header design, which should help tweak your combinations. For now, here's what Comp Cams and Vengeance Racing had to offer and the results should speak for themselves. Without further ado, we present the first part of our multi-issue test and we look forward to hearing from you if you have any questions, concerns, or ideas for future camshaft testing.

Testing Procedure and Camshaft Guidelines
As with any test, it's imperative to maintain strict guidelines to ensure valid results. Below, you will find our procedures for testing, along with our camshaft specification guidelines. While the former was very specific, the latter was left wide open, allowing manufacturers and builders to spec camshafts to their liking.

Baseline
Before running wild and changing parts, it was crucial to establish a solid baseline. Our test engine has lived most of its life on the engine dyno at RaceKrafters in Lancaster, Pennsylvania, and Bob Wise, RaceKrafters president, has made sure to keep it in tip-top shape to ensure valid testing. The short-block is actually from a '98 Corvette, with a completely stock rotating assembly right down to the factory rings. Up top, Bob replaced the factory LS1 heads with a fresh set of the later (241) casting LS1 units and swapped intake manifolds, ditching the LS1 in favor of a better flowing LS6, along with a matching throttle body. Since all testing was done on an engine dyno, we used a set of 1.75-inch long-tube headers, which flow into dual 2.5-inch exhaust pipes and 2.5-inch Flowmaster mufflers, to replicate real world results. Otherwise, everything else on our test engine remained stock, with the exception of the water pump, which was swapped for a Meziere electric unit, to help keep water flowing through the engine in between runs in order to maintain consistent temperatures and help prevent heat-soak. Comp's new line of Muscle Car & Street Rod engine oil, in the 10W30 variety, was used to keep the 5.7L well lubricated. As expected, our initial runs, after bringing the engine oil and water up to temperature, were in the 400hp range, hitting a maximum of 418 hp and 422 lb-ft of torque. If those numbers seem a bit high to you, keep in mind that they're on an engine dyno and not to the wheels, which would show a loss around 15 percent, bringing our estimated rear-wheel horsepower to 355.3, about perfect for a well appointed bolt-on LS1.

Comp Cams 224/230 duration, .581/.592-inch lift, 114 LSA camshaft (PN 54-444-11) serves as a mildly updated version of an LS1 favorite, the single pattern 224, which has served GMHTP enthusiasts well for over a decade. While certainly not a large camshaft by today's standards, the 224/230 has enough duration to give it a great idle, while still making a considerable amount of horsepower and torque over a stock camshaft. For our first test, we installed the 224/230 camshaft, along with a set of Comp Cams 918 valvesprings (PN 26918-16), 7-degree titanium retainers (PN 762-1), 7.350-inch pushrods (PN 7950-16), and Comp's keyway adjustable billet timing set (PN 7102). During the install, to ensure valid testing, Bob made sure to degree in, or at least verify the proper positioning of each camshaft prior to making runs. With the parts installed, we fired up the dyno and made some initial adjustments to the tune, using a FAST XFI engine management. From baseline to the end, we chose to run each camshaft with 27 degrees of total timing and safe air/fuel ratios. Of course, each camshaft profile could probably be further optimized by a change in timing or a different air/fuel ratio, but for our testing we chose to keep each locked to ensure quality scientific testing.

Known to many as the Vindicator, our next camshaft in the test was ground by Comp Cams to Vengeance Racing's specifications. With 240/244 degrees of duration and a somewhat mild .608/.596-inches of lift, the Vindicator works hard by keeping the valves open longer, instead of pushing the valve farther into the stock combustion chamber. Right off the bat, we noticed the 240/244 had the most wicked idle of the group and sounded mean throughout the dyno session. Peak power recorded at 496.2 hp and 436.6 lb-ft of torque, gains of 78.2 hp and 14.6 lb-ft of torque over our stock baseline. The 240/244 brought massive power up top, with 400 hp on tap from 4,900 to 7,200 rpm, where power was still above 482 hp. In fact, from 6,200 to 6,900 rpm, horsepower never fell below 490, which was impressive. Average torque from 3,000-4,500 was up 2 lb-ft from stock, although the engine exhibited a noticeable dip from 3,700 to 4,300 rpm, something that all of the larger camshafts in our test did to some degree. For a daily driver with mild gearing or a small stall, the 240/244 would be sluggish down low, although once it was moving, power would be on tap for as long as you cared to stay in the throttle.

Exploring our theory of the 237/247 in a more radical race build, Bob decided to unhook the 2.5-inch exhaust from our dyno mule and run the combination with open long-tube headers. The results fit in line with traditional thinking-we lost power and torque down low and gained it up top. Peak horsepower came in at 6,800 rpm, recording 527.3 hp, a gain of 109.3 over stock and 14.8 over the full exhaust. Peak torque was also up to 443.0, a gain of 21.0 over stock and 6.3 lb-ft over the full exhaust, but average torque from 3,000 to 4,500 rpm dropped 10.3 lb-ft over the stock camshaft and 7 lb-ft compared to the full exhaust. Comparing the two 237/247 graphs side by side, you can really get an idea of how important camshaft and exhaust relation is to a build, as one would drive rather crisply, while one with no exhaust would be sluggish off of an idle. According to Bob Wise, a longer collector would probably help our open exhaust testing, although we will have to leave that for another day. For now, our LS1 testing is complete . . . that is, until the next shipment of camshafts comes in, which should be any day now!