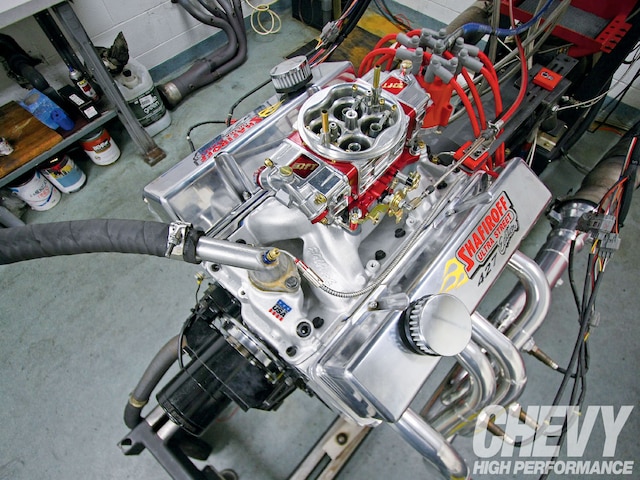 A casual look at the Chevy small-block marketplace reveals a large amount of attention being dedicated to the LS series-from how-to conversions to the latest stroker buildups. And rightfully so, GM's latest small-block powerplant is a workhorse that is growing more popular every day. But the original small-block Chevy engine is still around and isn't going away anytime soon. In fact, we can't help but notice that new versions of the venerable small-block are still being released. The Mouse motor always offers a great power punch at an extremely affordable price tag. The current economic climate has all of us looking for more power and doing so without tapping what's left of our 401(k) plan. Our search for power and price tag led us to Scott Shafiroff Racing Engines (SSRE) where its Real Street lineup was designed for the budget-minded consumer, who isn't looking to buy the latest Pro Mod-turned-street-legal mountain motor.

The SSRE catalog has plenty of options for the unlimited budget but for most of us, the Real Street 427 small-block packs a powerful punch along with a reasonable price tag. "We build the Real Street engines for a specific power and keep it in the confines of that horsepower with a broad torque curve, run on pump gas, and be a real street engine," commented Scott Shafiroff, a longtime engine builder whose résumé includes Pro Mod and Pro Street championships. There are three versions of the Real Street small-block, including two 402ci combos and the popular 427ci version-which we scoped out for this story. The base 402ci enters the market at $7,295 while the 427ci can be had for $8,795. We call these the base versions because SSRE has menu of options so a customer can custom build the engine to their liking. And for those who prefer to use E85, SSRE even has you covered there.

When it comes to numbers, the Real Street 427 cranked out 566 hp and 588 lb-ft on the SSRE engine dyno-more than enough power to push a typical street/strip ride to low 11s or even high 10s on pump gas, all the while being able to be driven to the track without any problems. Making it more impressive is that those results were accomplished on 91 octane, instead of the more popular 93 octane petrol. It isn't magic and if you ask Shafiroff how they can do it for that price he simply replies with a smile and says, "it's what we do." He went on to tell us that while it isn't rocket science to make that kind of power reliably with a small-block Chevy, SSRE has figured out a better way of doing it and then passes the added savings onto their customers. Shafiroff explained the SSRE quality control program, which inspects and verifies every component before a single bolt is even turned on an engine build.

"It's the quality control. You cannot take anything for granted," said Shafiroff. He continued, "we check everything here, we find the 'oops' before it gets into the engine. We have the ability to quality control everything-if a crank or rod or any other component doesn't pass our specs then it never gets used in a customer's engine." One look around SSRE and you realize this isn't a small company. Its large size allows Shafiroff to order large volumes of components and manufacturers will set up the parts to SSRE's specs. Those specs are doubled-checked when the shipment comes in and it's a process that Shafiroff calls Production Precision.

Shafiroff said their strict quality control measures allow the company to build lower-cost combinations that perform admirably. He went on to say that the parts chosen for the Real Street line were done to ensure longevity and durability-provided the engine is used in its intended form. As noted earlier, the 427ci bullet we followed knocked out over 550 hp and the components used are more than capable for that power range. However, if you throw two hits of nitrous on top of it, then the parts will be pushed past the intended application. "You pick your power and match the components for the right recipe."

SSRE starts off with a Dart SHP block that features 4.125-inch bores to help bump up the cubic inches. If you recall, SHP blocks burst onto the scene just a few years ago as a low-cost option for the increasingly hard-to-find OEM blocks. It boasts several nice features like four-bolt main caps but maintains a reasonable price. SSRE turned to a set of 6-inch Eagle rods and a 4340 steel crankshaft that features a 4-inch stroke. The compression stands at 10.25:1 thanks to a set of Mahle pistons, which are custom designed by SSRE. "There is no such thing as rinse and assemble," noted Shafiroff. The engine parts are in stock and the engine assembler gets a cart with all of the parts ready to be put together; the components have already been machined and inspected before reaching the engine build room.

The top-half of this engine build features the HHR package, which stands for Hot Hydraulic Roller. Not only is the camshaft upgraded to an aggressive hydraulic roller stick but the heads are swapped to a set of AFR 210cc aluminum heads. This pumps the base power of the Real Street 427ci up by over 40 hp. Shafiroff laughed when we asked for the cam specs, but did say that SSRE will custom tailor the camshaft to any customer's requirements. The AFR heads feature 2.080/1.600-inch intake/exhaust valves and flow numbers come in at 311/237 cfm on the intake/exhaust ports. Those numbers were measured using a 4.060-inch bore, meaning the AFR heads flow more on this engine due to its larger bore size.

The final pieces to the puzzle were a Quick Fuel 750-cfm carburetor and MSD ignition system. The Real Street 427 didn't disappoint us on the dyno as it blasted out 566 hp and 588 lb-ft with ease. The SSRE website advertises this engine as a 565 hp/575 lb-ft package, right below what this engine tested. We liked how the engine repeated those numbers several times on backup runs. All SSRE crate engines are run on the dyno to ensure trouble-free performance and to verify it produces the advertised horsepower. Topping it off, shipping is free in the 48 mainland states and SSRE engines carry a standard 2-year warranty.

It might be just a small-block Chevy to some but 566 hp on pump gas is hardly modest for any street car.

What Is It
A potent drop-in crate engine