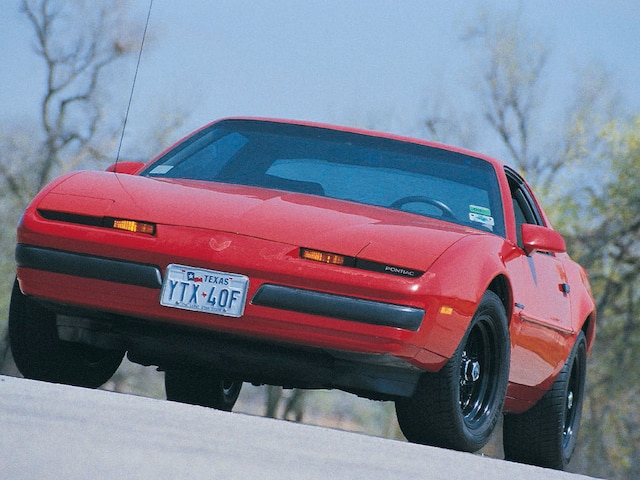 Brian Gruben won't lie. He wants to go fast, but he's on a budget like the rest of us. Unlimited funds are for the federal government. Follow along and we'll show you how Gruben added 40-plus horsepower to his '89 Firebird with a set of inexpensive cast-iron Vortec heads, courtesy of a new Vortec/TPI intake manifold. You can do the same. Like a lot of us, Brian drives an F-body 'Bird of the '86 to '92 era. (Okay, it's an '89.) This swap works for F-bodies and Y-body Corvettes originally equipped with the GM TPI, which are vintage 1985-1992.

Gruben is one of the many tech experts at Scoggin-Dickey Parts Center in Lubbock, Texas. Under the tutelage of Nicky Fowler, this GM dealer has built up a large clientele for high performance parts. On our visit, more than 25 people were answering the phones in its parts department, and most of the calls were not from Lubbock. Customers are from all over the United States and abroad. While we were taking pictures of the parts and pieces in this high-tech build, a lady appeared to retrieve Nicky's signature on a large order routed to Argentina.

In the course of our day at SDPC, we had occasion to walk through the warehouse. Two men were emptying a pallet stacked about five feet high with row after row of boxes. Nicky piped up, "We just received this shipment of the Vortec/TPI intakes today."

There must have been one hundred boxes on the large pallet, giving us an idea of the popularity of this new part. You can imagine why. When the Vortec heads were released in '96 (on L31-equipped pickups), it didn't take a brain surgeon to figure out they were an easy twenty-five to thirty horsepower bolt-on.

Nicky told us why, "The ports and the combustion chamber designs were vastly improved over the conventional Chevrolet small-block head that came on the previous production years of cars and trucks. Everyone wanted to install them because at that point in time you could buy a pair of cast-iron Vortec cylinder heads for around $360 a pair-brand-new and fully assembled."

But, alas, for poor 1985-1992 tuned-port people, these heads proved incompatible with the stock TPI intake. Six years elapsed. Finally, Fowler, who hobnobs with GM engineers and high-performance parts experts on his many forays into Motor City, decided to answer the calls, literally.

He explained, "People were trying to install the Vortec heads on their stock tuned-port intake, and then they'd call us and go, hey, my intake manifold won't work!"

Customers re-drilled the Vortec heads for the conventional small-block Chevy intake bolt pattern and ran into trouble when they tried to bolt on their factory GM TPI intake. As we have shown in the pictures, the intake ports do not match. These early TPI/Vortec cylinder head customers had no options.

Nicky pointed to a Vortec head on a rotating stand. For illustration only, he had overlaid the intake ports with a stock gasket from a conventional small-block Chevy to physically see the raised port of the Vortec head.

Nicky stuck his ballpoint pen in the opening between the gasket and the top of the port opening in the head and said, "Here's what happens if you try to bolt your factory TPI intake to a set of cast-iron Vortec heads that you have drilled and modified for the stock intake bolt pattern. Notice the intake manifold will not cover the top of the intake ports."

He also pointed out that if you tried to adjust the manifold upward to cover the top of the Vortec intake port, the contact surface would be so minimal that it would never seal and now the floor of the port would present a sealing problem. Total mismatch!

Tuned-port people in the middle of Vortec head swaps were in a pickle. They had to take their intake to a special shop to weld extra aluminum and then mill the surface flat. The costs defeated their purpose of inexpensive heads, not to mention a host of other "quirks" of compatibility we'll show you. SDPC cured these problems with its new intake manifold and installation kit.

Ultimately, all this is in the name of power, and boy, do the SDPC Vortec TPI base and heads deliver. Using a DTS water brake engine dyno, the Vortec TPI conversion twisted the needle to 305.6 hp, and that was using the stock runners, stock throttle body, a stock L98 cam, 92 octane pump gas and 15° of base timing. Calculating a 20 percent driveline loss for a 700-R4 transmission, power at the rear wheels is estimated at 244.4 hp. Next up was Brian Gruben's combo which added an LT4 Hot Cam, 1.6 ratio roller rockers, a 52mm throttle body and Edelbrock High Flow runners. Power swelled to 356.7 hp at a very streetable 4900 rpm. With a conservative 20 percent driveline loss, that would come out to around 285.3 rearwheel horsepower. Now that's what we call affordable bolt-on power!

Like A GM Part
Nicky Fowler at Scoggin-Dickey saw the need for a TPI Vortec manifold. Before they got into the business of manufacturing them, SDPC first went to GM Performance Parts. The need was so great, Fowler wanted to make sure GM had no intentions of putting this part into production. It made no sense for two companies to be making the same intake.

Fowler remembered, "When we sat down and discussed it with them, they had decided not to produce the intake."

The door was open to make the part. Nicky explained, "We wanted to be able to make the intake using their engineering knowledge and blueprints to make sure that we were making the correct piece. We needed GM's blessing to be able to do that."

Manufacturing A Factory GM-Style Intake
Scoggin-Dickey manufactured a "TPI Vortec manifold" which would fit the factory components for ease of use and to keep added cost to a minimum. "We had new port cores designed for the TPI base to match the intake ports of the Vortec cylinder head so you could have all the performance gain offered by the Vortec head. It was absolutely vital that port angle entries be correct and the port location be correct. We also left enough material in the intake manifold so that if you want to use the aluminum Fast Burn head which has a little bit bigger intake port opening, you can port match the base manifold. So it is a completely redesigned intake made specifically to fit a cast-iron Vortec cylinder head."

To install Vortec heads on your TPI motor, you'll need these parts. At the heart of the conversion is the hybrid intake manifold. Nicky has mounted one set of factory TPI tubes for show. Also pictured is the EGR Installation Kit, the Intake Bolt Kit (black and stainless) and the Vortec GM Intake Gasket Set.

Brian's Firebird had a few more changes, as listed below: