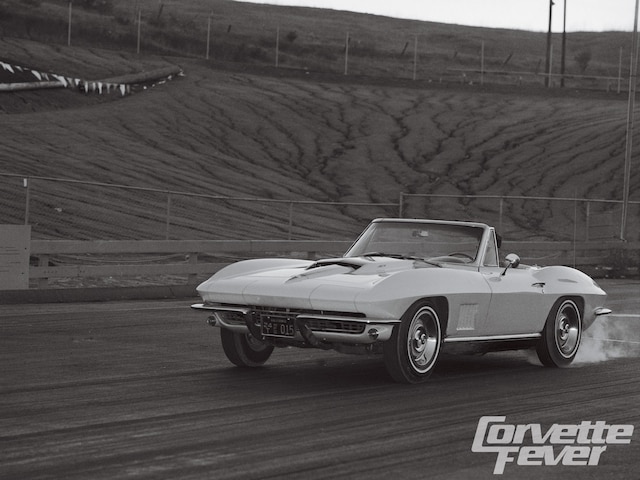 Early in the '66 model year, the 427ci L72 engine was rated 450 hp at 6,400 rpm. Not long after production began, the rating was lowered to 425 hp at 5,600 rpm. There were no changes to the engine, but Chevrolet's central office apparently realized that 450 hp would attract the attention of safety minded politicians and insurance companies. Also, there seemed to be an unwritten agreement between Ford, Chrysler, and GM that no engine would be rated over 425 hp no matter how powerful it was. In 1967, Chevy broke that rule by rating the L71 (triple two-barrel carb, solid-lifter, 427ci) engine at 435 hp. The L71 was identical to the '66 L72 except for the intake system. The L72 had one four-barrel carburetor compared to the L71's Tri-power setup.

Over the years there has been much speculation about the actual horsepower output of these two engines. Some people believed the L71 made nearly 500 gross horsepower. However, performance and dynamometer numbers seem to tell a different story. All known magazine quarter-mile times for L71- and L72-equipped Corvettes averaged 13.38 seconds at 107.94 miles per hour. For cars of equal weight, quarter-mile trap speeds are an excellent indicator of horsepower. Magazine tests of LS1-equipped C5 Corvettes had the same trap speeds as L71 and L72 Corvettes (see sidebar). Because big-block C2 Corvettes are nearly the same weight as a C5, we can assume they equal the 345 to 350 SAE net horsepower that LS1 engines make.

In "Big-Block Power Tune" (Nov. '06), Corvette Fever chronicled a meticulous dyno tune on a correctly restored '66 L72 Corvette in order to determine horsepower gain from the tune. Before the dyno tune, the engine produced 289 rear-wheel horsepower (rwhp) at 5,000 rpm and 331 lb-ft of torque at 3,800 rpm. After the dyno tune the output went up to 301 rwhp at 5,000 rpm and 342 lb-ft of torque at 3,800 rpm. This car was restored to showroom original condition for acceptable street operation and was equipped with the (more restrictive) N14 side-mount exhaust system. A standard under-car exhaust would most likely have resulted in somewhat higher numbers, probably at a higher rpm. Maximum horsepower was reached at 5,000 rather than closer to 6,400 rpm, where an open exhaust would have produced peak power. On average, the 345 net hp LS1 engine also produces 300 rwhp. Equal rwhp for both the LS1 and L72 translates to 345 net horsepower for the L72.

Enter the 454
For the '70 model year, Chevrolet developed 454ci engines to replace the 427. (See the accompanying chart for the 427s, their 454 replacements, and power ratings.) With preparation for their introduction well underway, all 454 engines except the LS5 and LS6 were cancelled due to GM's de-proliferation program to eliminate costly options as well as high insurance rates, and top management's desire to tone down horsepower. Eliminating the Corvette's LJ1, LJ2, LS7, and LT2 engines from production was untimely, as it was too late to put the LS6 on the Corvette option list. These cancellations left Corvette in the unusual position of having less power than the '70 SS454 Chevelle, for which the LS6 remained an option. Chevrolet corrected this the following year by making a lower compression, 425hp version of the LS6 an option for the '71 Corvette while deleting it from the Chevelle's option list.

To prepare customers for the 1972 switchover from the gross to net method of rating horsepower, Chevrolet reported both gross and net ratings for '71 Corvette engines. The Corvette LS6 received a 425 gross and 325 net hp rating. The gross-to-net conversion factor for that engine was 0.7647 (325/425), which can be used to convert our previously determined 345 net hp for the L72 to a gross rating. Using that factor we come up with a gross rating of 451 hp (345/0.7647 = 451.16) for the L72, which for all practical purposes is exactly the same rating Chevy initially gave the engine.

The '70 SS454 Chevelle, with a 454ci, solid-lifter, high-compression, LS6 engine, was rated 450 gross hp at 5,600 rpm and 500 lb-ft of torque at 3,600 rpm. That engine had the same internals (camshaft, heads, lifters, and so on) and 780-cfm carb as the L72 427. Many enthusiasts thought the LS6 was the more powerful engine, but Tom Langdon, a '60's Corvette powertrain development engineer, pointed out, "Increasing the stroke without enlarging the bore doesn't translate into a real increase in power. Some of that extra power is eaten up by increased friction. A good 427 (L88) would put out about 600 horsepower. The 454 pulled more torque, but power was just about the same as the L88." (This quote comes from Classic Corvette-The First 30 Years by Mike Mueller, originally published by Motorbooks.) Langdon's statement also applies to the L72 and LS6. They were identical engines except for stroke-derived cubic inches, and both made 450 hp.

Notice that the 425hp L72 and 450hp LS6 were both rated at 5,600 rpm. This had to be a carefully considered rpm number for Chevrolet. If the LS6's 450 hp had been advertised closer to 6,400 rpm, where peak power actually occurred, the new 454 would have looked no stronger than the 427. It was no secret that early production L72s had been rated 450 hp at 6,400 rpm. The 454 did develop more torque, but torque doesn't sell fast cars. Chevy had to make its new engine look more powerful than the old one, and 5,600 rpm accomplished that.

With the introduction of the 454 engine, Chevy gave us more realistic horsepower ratings. It was becoming all too obvious that the horsepower wars were drawing to a close. With nothing to lose, this may have prompted more accurate reporting. The LS6 was given a believable 450hp rating, and the LJ2 was slated for 460 hp. However, truth in ratings did not extend to the LS7 and LT2, the 454-inch replacements for the L88 and ZL1, respectively. Both should have been rated at over 500 hp rather than the scheduled 465. Chevy wanted to be honest, but not that honest. There would have been some explaining to do if the horsepower prohibition watchdogs realized street-going rocket ships were being sold and powered by L88 and ZL1 engines.

Rating the L71
We have determined that the L72 engine had a true rating of 450 (SAE gross) and 345 (SAE net) hp. Now let's look at the L71. The only difference between the two engines was carburetion. The L72 had one Holley four-barrel flowing 780 cfm, and the L71 had three Holley two-barrel carburetors capable of feeding the engine at 1,000 cfm. This triple-carb setup gave the L71 an official rating of 435 hp at 5,800 rpm. Along with flowing more air, Tri-power provided a more efficient flow to the cylinders, all of which resulted in 10 more horsepower. However, that 435 rating was not the peak horsepower that the L71 actually produced. It most likely made the same 460 SAE gross hp that LJ2 was to be rated. Langdon's statement that a 454 developed more torque but the same horsepower as an equivalent 427 is the basis for assuming that the L71 and LJ2 made equal power. A 460hp L71 makes perfect sense. We have already established that the L72 made 450 gross hp, and Chevrolet maintained a 10hp difference between Tri-power and four-barrel-equipped 427 and 454 engines.

Even though the L71 received a higher power rating, actual performance between the L71 and L72 is very close. In fact, the L72 had the best magazine quarter-mile time, albeit not by much-12.8 seconds at 112 mph versus the L71's 12.9 seconds at 111 mph. The L72's four-barrel carburetor may have given it a slight quarter-mile performance advantage. Some drag racers claim that a four-barrel provides better power delivery than a triple carb set-up. Tri-power L71s operate on the primary center carburetor until you put your foot into it, then the two secondary carburetors, controlled by a mass-air vacuum signal from the center carb's venturi, open up for full power. Those progressive, vacuum-controlled secondary carbs may be a slight disadvantage in the quarter-mile, but when working properly make for a smooth power buildup.

Magazine performance numbers and chassis dyno figures mixed with a little Corvette history make a compelling argument that Chevrolet did have its horsepower ratings correct for early production L72s and the LS6, but in between, advertised L72 and L71 ratings were on the low side.

*It is assumed LJ1 was the 454 replacement for the 427 Tri-power, 400hp L68. This is logical because a '70 Corvette assembly manual shows a 400hp LJ1 engine getting the same M40A Hydramatic transmission as the 390hp LS5, thereby classifying both on the lower performance end of hydraulic lifter big-block engines. Looking at RPO codes for 454 engines, it becomes obvious the slot for LJ1 is right after LS5. Mike Mueller, in his book Classic Corvette-The First 30 Years, mentions the possibility that the LJ2 was the 454 equivalent of the 427 L89 engine, which would make the LJ1 the 454 equivalent of the L71. However, I don't think this is a likely scenario because aluminum heads were not a popular option, and the trend at GM was to get rid of costly low production options. All considerations point to LJ1 as the 454 replacement engine for the L68 and the LJ2 as the equivalent of the L71. I believe Mueller agrees with this, as he refers to the LJ2 as the tri-carb L71 replacement various times, with the possibility of an L89/LJ2 connection only once.