Modernizing Your C1 or C2 Corvette with the Latest AME Chassis 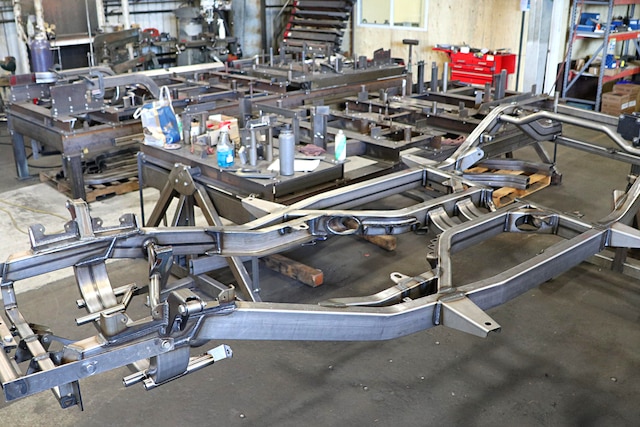 For the few of you who don't know the story, in about 2000, AME basically invented the aftermarket performance chassis industry as we know it. Prior to then, the company produced components to amend factory chassis for drag racing. Sure, AME could make a full chassis by spanning its production subframes with rails, but it was up to you, the consumer, to basically cut the floor out of your car and build a new one to accommodate said chassis. And the best that chassis could do (and to be fair, the only thing it was designed to do) was to help your car go fast in a straight line.

Recognizing the brave new world of turning and stopping, Art's son Craig urged the AME crew to think in more dynamic terms. The chassis that debuted under Art's personal '55 Chevrolet wasn't just a Mustang II or Corvette design applied to a set of generic rails that could fit under a Tri-Five. It was a clean-sheet IFS and triangulated four-bar rear that accounted for the more upright proportions of older vehicles. And it came welded to framerails, mandrel bent to follow the floorpan of its recipient.

This chassis' ability to generate lateral g-forces kind of put the car world on its door handles, so to speak. Art Morrison's catalog of GT-Sport and MaxG chassis flourished as enthusiasts submitted their cars for consideration. Now you can get an Art Morrison Enterprises chassis for cars that never even came with a chassis (like unibody designs).

About a dozen years ago the company applied that process in the shape of a chassis for the C1. But the C5 front suspension it employed limited wheel diameter to 17 inches and larger, sizes that some objected to. What's more, those C1 chassis were limited to a triangulated four-bar rear suspension.

Then Morrison introduced a clean-sheet front suspension based on the Wilwood PRO spindle, a component that accommodates wheel diameters as small as 15 inches. In the spirit of progress, Morrison modified the chassis that uses the Corvette suspension to use C6 uprights and C7 control arms. The last piece of the puzzle came in the form of an independent rear suspension based on the 2010 Camaro and Strange Dana 60 gear case. It turns out it's very difficult to make an IRS that fits in the confines of such a small car without having to butcher said car or compromise the dynamics. But the engineers prevailed.

And then, just like that, Morrison blew us all away again. This time it was a part number for a C2 chassis. If there's anything you'd expect from such a design, you'd know it would have to have IRS, too (though you can get it set up for a four-bar if the deep-wheel thing is your bag).

If you speculated that a C2 chassis was long in the making because of complexity, you'd be dead right. To lower the center of gravity, papa Duntov had the engineers set the occupants between the side rails rather than on top of them, as they did on the C1. Doing so made it all but impossible to create a triangulated center crossmember, the simplest means to build torsional integrity.

The C2's engineers compensated for the open-plan design by increasing the box-section of the side rails. But to make room for the occupants, they had to give those rails a trapezoidal shape. And because Chevrolet made the floor fit tightly to those rails, Morrison had to duplicate that shape to get the maximum torsional integrity. Which, as Craig pointed out, is difficult. "Making the rails from two pieces was simple," he says. "But welding them together wasn't." The rails warped from the welding heat regardless of the technique the welders used. "It wasn't until someone brought up plasma-arc welding that we could weld the rails without warping them," Craig adds. And with another heavy investment in tooling, Art Morrison Enterprises was off to the races.

Right now the C3 folks are thinking, "Hey, what about us?" It's true that the C2 chassis survived largely intact until 1982, making it inevitable that someone will adapt a chassis. "And really all somebody would have to do is modify the ends to work on a C3," Craig says. Which is something he says is on the list of things to do.

And when Art Morrison Enterprises does it, expect it to put the Corvette world back on its ear. Again. Vette

It cost AME a bunch of money to produce this chassis. Among other things, it had to acquire a few massive warehouses across the lane from the main facility. Like a goldfish, the company had literally grown to fill its home.

As with all chassis-design projects, the job began with 3D laser scanning. The white dots represent points that the scanning software uses to interpolate shape from numerous images. This, among other things, gives the engineers a fine-resolution digital map of the body's underside.

From there, engineers design a chassis that fits within the confines of the car's underbody. They can alter fit, say by moving the axles to center the wheels in the wells, making the car fit the way 21st-century eyes expect it to. This tweaking also tightens the loose tolerances that the factory had to fight.

The design spits out code that AME uses to bend tubes. This is a real mandrel bender, as in there's a mandrel—a set of dies—that fits inside the tube to eliminate distortion during the bending process. The tube maintains its dimensional cross-section regardless of shape, something that's critical to make a chassis match plans.

Morrison bores its mounting holes using numeric-controlled machinery, making every hole consistent across each frame. That means each component fits in the fixture consistently, which improves fit down the line.

Producing chassis with tight and consistent tolerances minimizes the variables that make building a car such a time-consuming and labor-intensive task. If the body that goes on it weren't so handsome we'd call it a shame to cover up all that beautiful work.

The X-member GM gave the C1 is good given the state of Eisenhower-era technology. But AME's box-tubing structure can better maintain structural integrity in light of today's tire and drivetrain technology.

Naturally, AME includes the substructures for things like the nose mount. And, of course, they're double-skookum, consistent with the rest of the chassis.

The structural integrity can't be underemphasized; it's beefy with plenty of welding surface-contact area. This isn't expense; this is investment in long-term performance.

Fitting the chassis with independent rear suspension required making not just all-new linkage to fit the wheels within the body but also a clean-sheet cradle to fit between the framerails and under the trunk floor.

Said cradle is a combination of tubing and sheet, shapes chosen for their mechanical and weight attributes. The whole IRS assembly drops out by removing four fasteners along the perimeter.

Using OEM components like the Camaro uprights minimize cost and weight. In this case it opens the door to a broad variety of great brake options—even the stock discs (with internal drum parking brake, shown) kicks ass.

It may look like a garden-variety GTAW/TIG torch, but this CNC-operated jewel is the functional end of a plasma-arc welder. It focuses heat in a much narrower area and uses no filler, both that prevent warp. It's how AME creates straight trapezoidal framerails for the C2 (and later) chassis.

Art Morrison Enterprises doesn't offer production exhaust systems, but it makes them for proofing. Note how the pipes pass through the crossmember and how the design opens the door to various plumbing configurations, including a crossover pipe.

As with the case with the C1, the C2 IRS requires an application-specific cradle. This fits within the floor's confines yet boasts the most refined suspension geometry and dynamics to date—it far exceeds adaptations of even GM's later designs.

The C2 takes all varieties of small-blocks all the way up to Gen V (including dry-sump) as well as big-blocks. Naturally, it accommodates a host of OEM and aftermarket transmissions, manual and automatic alike. This setup has headers, but the respectable factory manifolds fit, too.

Engine placement relative to crossmember centerline presents packaging challenges but AME managed to reconcile the issues. The passenger-car Gen III and IV engines fit, the only concession was made to relocate the compressor higher and outboard of the tensioner.

And here's the final stage of most AME chassis: assembled, crated and awaiting shipping. Heck, even the crate is a work of art.