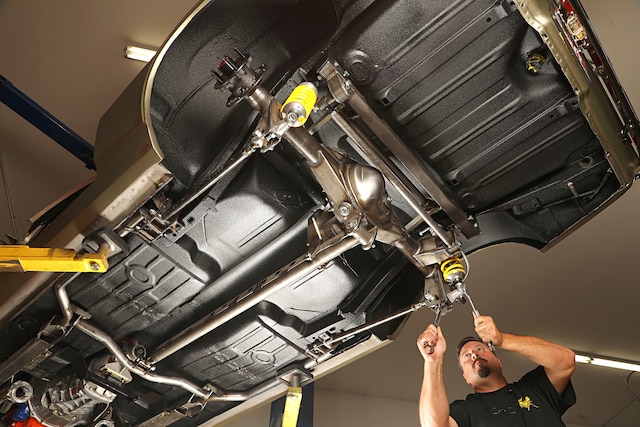 Recently, we shared with you that Speedway Motors entered the muscle car suspension market. Given late founder Bill Smith’s status as team owner, it makes sense that his company developed products to give cars that bore its name a competitive edge. And given the company’s status as a mail-order vendor, it makes sense that he profited from the sale of those products to other racers. To this day, the relationship between the racing and commercial sides of the business is mutually beneficial and gives Speedway Motors a competitive edge on the track and in the marketplace.

Given that background, it also makes sense that Speedway would enter the muscle car world the way it approached every other market: full-bore. The company initially released the G-Comp line, a series of production-oriented suspension designs that rival those offered by its competition. But in the spirit of one-upmanship, Speedway took it to a more extreme expression. It teamed with the Unser family to design a series of suspension components that offer not just the geometry to make a car handle well, but the adjustability to make it highly competitive in motorsports like autocross and even road racing. As Speedway’s race-team manager Bill Schneider put it, the G-Comp system is a street design that can be driven on the track, but the G-Comp Unser Edition is a track design that can be driven on the street.

Previously, we showed the front suspension install on Chris Holstrom’s pet project 1968 Camaro. It stands to reason that Speedway would develop a comparable rear suspension design to match. This article is about that. Actually, this is one of two rear suspension designs that Speedway offers. There is a three-link design similar to (but nothing interchangeable with) the torque arm system that GM used in the third- and fourth-gen F-body platform. The other is a truck arm design similar to the rear suspension employed in NASCAR (which was derived from 1960-’72 GM pickups, in case you wondered where the truck arm description came from).

So which one is right for your application? Well, it’s probably an easy choice.

Given its NASCAR heritage, there’s no debating whether the truck arm design works. It has decent antisquat properties, and, technically, its fully adjustable Watt’s link has a slight edge over a simpler track/Panhard bar in the sense that it has no roll bias (it has the same roll center whether turning left or right).

Similarly, the three-link/torque arm operates entirely without bind that can otherwise potentially interfere with tuning. It also boasts greater adjustability (pinion angle, axle alignment, and antisquat). Critics will say that its track/Panhard rod imparts roll bias, which tends to favor handling in one direction more than the other. However, Schneider asserts that it would take a full-bore race car to expose the difference. In fact, he says for all intents and purposes that the three-link is probably the better choice for even the most die-hard enthusiast.

The reason is simple: “You don’t have to cut the car to install it,” he reveals. “You have to cut the floorpans to install the truck arm system. It’s not such a big deal if you’re doing custom floors anyway, but it gets in the way if you want to use the back seat. The torque arm just bolts into the car. No cutting or even welding—just drilling.” Here’s another advantage of the torque arm system: it doubles as a subframe connector.

Installation is remarkably simple and downright quick on a straight body. Honestly, disassembling the stock leaf-spring suspension took longer than installing the new system. It requires only one tool that most enthusiasts lack: a 12-inch-long 1/4-inch drill bit (you’ll see why during the installation). But even big-box hardware stores stock those for less than $10, so that’s no issue. And while Speedway designed it as a bolt-in system, Chris opted (with Speedway’s blessings) to weld the rear components in place. Speedway gave the system a lot of tuning potential. Naturally, it covers the alignment basics, including pinion angle. But you can also alter the roll center by raising or lowering the track/Panhard bar. The axle brackets have two positions for coilover mounts to extend the ride height adjustment range without compromising the damper length. They also have three trailing arm hole stations to tune antisquat.

Now for the amazing part. Speedway offers this whole suspension design with a Grand National-style 9-inch axlehousing with floating hubs and the option of floating calipers for about the same price as most other kits that don’t include an axlehousing. Typical for these kits, it doesn’t include coilovers (that’s a personal preference thing anyway), but it does include a splined antiroll bar (Speedway offers them in various diameters for tuning purposes).

If you wrote off Speedway Motors as nothing more than a mail-order outfit, it’s time to update your opinion. The company is bringing up the rear with one hell of a suspension design that promises to make the competition—theirs and yours—scramble to keep up. CHP

The rear crossmember assembly consists of the crossmember itself and end pieces. Assemble them with the antiroll bar mount pointing in the same direction as the “wings.” Thread the fasteners on almost all the way but do not tighten them. The end pieces slide in and out to accommodate manufacturing variations in the body.

Hoist the assembled crossmember into place and clamp the ends. The exact location isn’t critical at this point. Just get it in there.

Here’s where location becomes critical. Slide the crossmember back or forth so the back edge of the end brackets land 19 3/4 inches ahead of the rear shackle hole centerline. Clamp it tight again but do not fasten at this point.

Install the front crossmember/subframe connector as components or as an assembly. The front aligns with the rearmost holes for the front subframe.

Assemble the trailing arms, and for the time being adjust them to 23 1/4 inches center-to-center (not 23 3/4 as shown here). Ensure that both links project from the bar by equal amounts. Leave the jam nuts loose.

Install the forward link in the trailing arm mount and bolt the mount in place where the leaf spring bracket once fit. Also fasten it to the subframe connector. Leave all fasteners slightly loose for the time being.

It’s easier to install the third member on the ground so we broke with the instructions and attached the pinion mount before the axle assembly went into the car.

Lift the axle to roughly ride height and attach the rear links to the brackets. Use the mounting holes that get the bars parallel with the ground.

Press the bushings into the rearmost end of the torque arm. They’re hard (acetal) so it’ll likely take a shop press.

Lift the torque arm into place and fasten. Leave the fasteners loose for the time being.

The sliding yoke in the torque arm’s leading end attaches to the cross tube. Feel free to tighten this and all other fasteners except the lower-link jam nuts.

Speedway designed the rear crossmember end brackets to either weld or bolt into place. Chris welded his, but here’s the bolt-in technique. This is where the 12-inch-long 1/4-inch drill bit comes into play. The trunk pan bolt holes are way up in there. Drill through all four on each side using the lower bracket as a template.

Now install the floor strap on the topside (inside the trunk) and drop the 1/4-inch fasteners through the holes. Thread the lock nuts on from the bottom side and tighten.

Again, using the brackets for a template, drill through the framerails. The holes are 1/2-inch, but you’ll need to start with a smaller bit. Speedway supplies a 1/4-inch bushing for this very purpose. Drill through both sides of the framerail.

Now follow up with the 1/2-inch drill. Again, bore through both sides. Just keep the drill as straight as possible.

Bore the holes on the outer wall of the frame to 3/4-inch.

Adjust the track/Panhard rod so the ends project equally from the bar. Install it for the time being so it sits roughly level at ride height; which holes you use are basically irrelevant as you’ll move the bar up or down during tuning. Leave the jam nuts loose for the time being.

Press the antiroll-bar bushings into the crossmember tube, attach an arm to the bar end, and push the bar through the tube. Install the second arm parallel with the first. Bolt the links to the arms and axle, but leave their jam nuts loose. Once the car settles to ride height, adjust the links to eliminate bind.

Grease the bearings and build the hubs. The instructions have a more detailed account showing the correct O-ring orientation.

Attach the hubs, tighten the hub collar enough to just snug (no endplay), and lock the collar with the retaining ring. Then slide the axle into place and attach the final O-ring and dust cap.

Install your coilovers of choice. (Speedway recommended its AFCO double-adjustable external-reservoir model for Chris’ application.) Set the car down to set the ride height and to square the axle to the car with the trailing arms, and center the axle with the track/Panhard bar.