Fitting a Modern, High-Performance Drivetrain in Your Early Chevy Nova 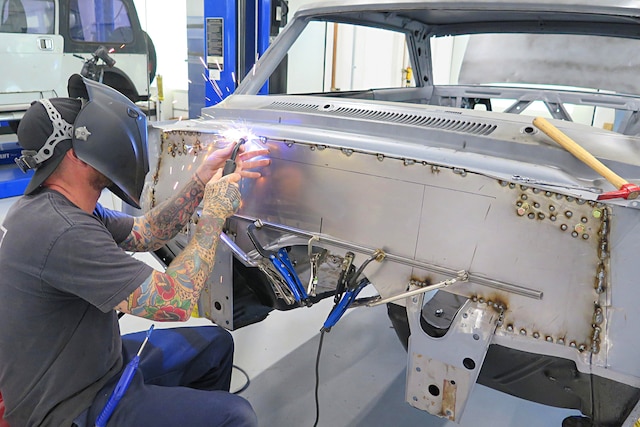 We can still remember back when upgrading your suspension consisted of a stiffer roll bar and maybe some polyurethane bushings. Then the performance ball got rolling with tubular control arms and things just kept picking up speed.

Fast forward a few decades and the hot ticket these days is a full chassis. Now, replacement chassis for cars that came from the factory on a full frame is a no-brainer, but, lately, several companies now offer full frames for unibody cars, such as the Nova and Camaro. One such company is Schwartz Performance. They engineered a way to slide a frame under our 1963 Nova project car and we didn’t even have to hack up the bottom of the car. The front clip gets ditched, but the rear factory framerails and floorpans are left alone. By using the car’s existing rear suspension points (such as the attachment spots for leaf springs) the new chassis gives these unibody cars incredible stiffness along with 21st century suspension design and geometry.

But, just because the new chassis slid under our ’63 easily didn’t mean we wouldn’t have some fitting and finishing to do so that the driveline would shoehorn into its new home. You see, cars like early Novas had small transmission tunnels that are nowhere close to being big enough for a modern transmission such as TREMEC’s Magnum six-speed. Add in firewalls with more holes than a wheel of Swiss cheese, along with the popular performance move of setting the engine back for better weight distribution, and we had quite a project ahead of us.

With the Nova body back from getting worked over, it was time to test-fit the new Schwartz Performance G-Machine chassis for the first time. As promised, it fit under the Chevy without any floor cutting and used the existing frame and suspension mounting points.

One area it did hit was where the brackets for the OE parking brake system attached. We removed the brackets, but that left the OE rail looking a bit ragged so we cut away the area and grafted in a patch panel.

With that addressed, we gave the bottom of the Nova a coating of 3M Body Schutz Rubberized undercoat (PN 08864) that we picked up from Summit Racing.

Just because the Schwartz chassis fit the car perfectly didn’t mean the Nova wouldn’t need modifications to clear the new driveline. We installed the TREMEC Magnum XL transmission along with a Quick Time bell and a plastic LS mock-up engine we have at the shop to see if the little Chevy would need surgery. As expected, most of the needed sheetmetal work was to accommodate the larger Magnum six-speed.

With the lines drawn, we cut away most of the original trans tunnel. The Magnum we have is the XL model, which locates the shifter further back.

Here’s where the back of our plastic LS ended up in relation to the firewall. It would most likely be fine like this, but we wanted to smooth out the firewall so we decided to give the engine more space in the back. This would also let us slide the engine back a couple of inches for better weight distribution.

With the chassis out of the way we cut away a good chunk of the original firewall, leaving enough to keep the body from twisting on the lift.

With the body back on the chassis, we took measurements to determine where we wanted our engine “pocket” to be located.

A paper template was made for our new firewall and then Tech Center Manager Jason Scudellari cut out the new firewall from 16-gauge steel. With that tacked in place we transferred over our earlier measurements.

A section was then cut out to replicate how we wanted the trans tunnel transition to look like. This would later be used as a template for the setback.

It was then time to weld the new firewall to the Nova. You can see the piece of square tube steel brace that was welded to the face of the firewall. This was to keep the new firewall from warping during the welding process.

With the brace removed and the welds ground smooth, Jason cut away the area for the engine setback.

Measuring, cutting, trimming, and tacking was done until the firewall setback was looking right. Once done, the box was perimeter welded.

With everything welded up, the welds were then ground smooth and the trans tunnel “half circle” we made earlier was transferred to the new piece and cut away.

At the end of several days of work this was our new firewall.

Heavy paper is the easiest way to make templates. Jason decided to start at the middle of the trans tunnel and work his way out to each end.

Once the paper was cut to the right shape, the template was used to transfer this shape to a sheet of 16-gauge steel.

The result is a panel that is the right shape to create our new, larger transmission tunnel.

Bending the curve in the tunnel cap took some time, but eventually it fit perfectly.

Once the shape was right, the two sides were bent to 90-degrees to create flanges and holes were punched to accommodate MIG welds.

With the middle section done we made a template for the much simpler rear section of the new tunnel.

It turned out that our welding gas cylinder was the perfect shape for our rear section. Hey, it’s all about being creative.

The forward section of the tunnel followed the same plan: make a paper template, transfer to fresh steel, cut out the shape, and weld it in place.

With everything welded and ground smooth we could now put the chassis back under the Nova to precisely locate where the shifter hole needed to be cut.

With the hole cut, Jason fabbed up a small box to house the shifter.

Nutserts were added to make installing and removing the shifter boot ring easier, plus it’s just nicer than sheetmetal screws.

In keeping with the simplified and smoothed-out game plan, the stock core support was set aside in favor of a much cleaner looking piece from Stoker’s Hot Rod Factory in Upland, California. They also provided slotted engine mounts that will let us slide the blown LSX 376-B8 engine back a few inches.

Jason wanted to carry over the simplified and smoothed-out look to the inner fenders so he picked up some aluminum inners from Total Cost Involved (PN 928-9963-00) and then trimmed them to precisely fit the new Schwartz chassis and components.

And since the Nova now had its fenders in place, with hinges, Jason could test-fit the new cowl-induction hood from Golden Star Classic Auto Parts. With everything fitting right, Jason shot the new sheetmetal with undercoating and got ready to install the full driveline into the Schwartz chassis and slide it under the Nova for the final time.