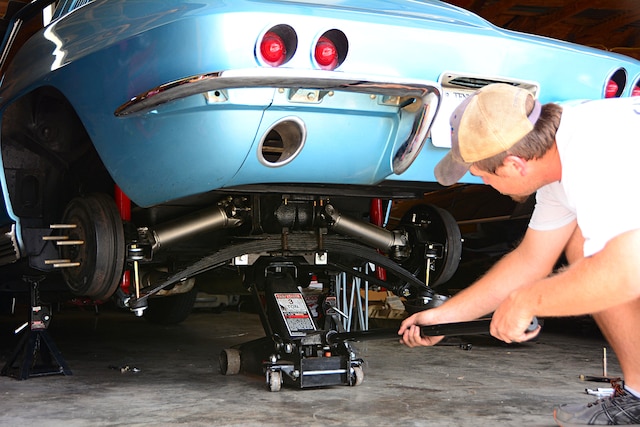 Corvettes were designed for optimal performance, and certain components changed over time in order to offer additional strength or longevity. A great example of this is the differential carrier mounting bracket, one of many pieces in the 1963-’67 independent rear suspension system that can fail and cause a catastrophic chain of events. In the case of this 1964 Corvette coupe, it’s experienced 55 years of hard shifting and the differential carrier mounting bracket showed no signs of fatigue when we rebuilt the rearend a few months ago. While the car is no stranger to spirited driving, a particularly aggressive 1-2 shift resulted in a “bang” and a few other bad noises.

What we found was a broken differential carrier mounting bracket. The bolts pulled through the bolt holes, allowing the entire centersection to rotate upward under power. This sent the pinion yoke into the driveshaft tunnel, which could’ve been disastrous, had the throttle stayed down a moment longer. Upon our findings, our first instinct was looking for an aftermarket bracket that is built with a bit more support. That search came up empty, but we did find a suitable factory part that is a direct bolt on. As it turns out, Chevrolet upgraded the design of the differential carrier mounting bracket in 1968, first making an appearance in Corvettes with automatic transmissions. All 1969-’79 Corvettes had the stronger bracket.

When we realized an original-style part could solve our problem and get us back on the road for less than $50, we called up Corvette Central and ordered the 1969-’79–style bracket and a new differential mount cushion. We also had to get some longer bolts to pass through the new, thicker bracket. And while this bracket is held in place with only four bolts (or three if you’re working on a 1965-’79 Corvette), it required dropping the centersection to access the bolts that pass through the differential. This complicated the process, as the centersection isn’t easy to remove, but we found a few tricks to speed up the process. It helps that our car doesn’t have a standard exhaust system all the way to the back of the car, so we didn’t have to deal with removing part of the exhaust in order to lower the rearend. Either way, take a look at how we repaired a weak link in the C2 Corvette independent rear suspension design by installing a new differential carrier mounting bracket. Vette

After we shed a little light on the situation, we found a giant crack in the original differential carrier mounting bracket. The bolts pulled through the bracket, allowing the rearend to rotate violently.

With the car resting securely on jackstands, we start by loosening the front bolt on the differential carrier mounting bracket. This typically requires a box-end wrench on the top side to keep the bolt from spinning.

The bolts that pass through the side of the differential carrier mounting bracket can only be reached with a box-end wrench.

What started as a four-bolt exchange got a little more complicated when we realized there wasn’t enough room to remove the differential carrier mounting bracket bolts. The storage containers (part of the floorpan) keep them from coming out.

In order to access the bolts we need to lower the rearend. We start by loosening (but not removing) the differential crossmember bolts. You may notice the thick steel plate, in place of the original bushing, a crude repair performed many years ago. The semi-solid mount still features a rubber bushing sandwiched between the crossmember and frame.

We disconnected the driveshaft and strut rods, and then dropped the leaf spring, using a jack to slowly lower it. Then, we placed the jack on the leaf spring plate, and applied light pressure. The rubber crossmember bushings allowed the centersection to rotate down just enough to remove the front bracket bolts.

By the time we got the differential carrier mounting bracket out of the car, it was nearly broken in half. Years of abuse and a weak design led to the breakage, but we have a simple fix without high-dollar racing components.

In 1968, Chevrolet added these braces to the differential carrier mounting bracket on cars equipped with automatic transmissions. Then, in 1969, it was added to all Corvettes and remained in place until the rear suspension design changed in 1980. This is obviously a much stronger design. We got ours from Corvette Central (PN 583006).

While we had it apart, we replaced the differential mount cushion (sometimes called a pinion snubber cushion) with a new unit from Corvette Central. The kit (PN 582002) comes with a steel sleeve and mounting hardware. We chose rubber, but this product is also offered in polyurethane.

We start the reassembly process by dropping the upper half of the differential mount cushion into the hole in the frame. Then, we can drop the bolt through the bushing sleeve.

Using the floor jack, we apply pressure to the rearend to rotate the pinion enough to slide the bolts into the differential carrier mounting bracket. The 1963 and 1964 cars feature one long pass-through bolt and two shorter bolts, while 1965-’68 cars feature two long bolts that pass through the differential.

If you’re installing this upgraded bracket on a 1965-’68 Corvette, you’ll need Corvette Central’s differential bolt kit (PN 582125), which features two pass-through bolts that are long enough for the reinforced bolt holes. If you’re working with a 1963 or 1964, you’ll need to swing by your local hardware store, as a specific bolt kit is not available.

Releasing pressure from the floor jack allows the rearend to rotate back to its resting place against the differential mount cushion. Now we can install the large washer, lock washer and nut, using a ratchet on the bottom side and a wrench on the top side.

With the rearend bolted in place, we can install the rear portion of the driveshaft to the pinion yoke. Notice the scrapes on the yoke where it contacted the driveshaft tunnel.

Now, it’s time to re-install the strut rods, using the same hardware that we removed earlier.

If you’re working on a smooth concrete surface; your floor jack will want to slide when you apply pressure to the leaf spring. You can either install a clamp on the leaf spring near the jacking surface, or in our case, a rubber mat on the floor will keep the jack stable while you re-install the nuts on the leaf spring bolts.

Luckily, this particular car has an exhaust system that dumps just before the rearend so our rearend repair is finished. On a typical C2 (without side pipes), the exhaust system would’ve likely interfered with our ability to lower the centersection.