Factory Suspension and Brake Upgrade on a 2018 Camaro SS 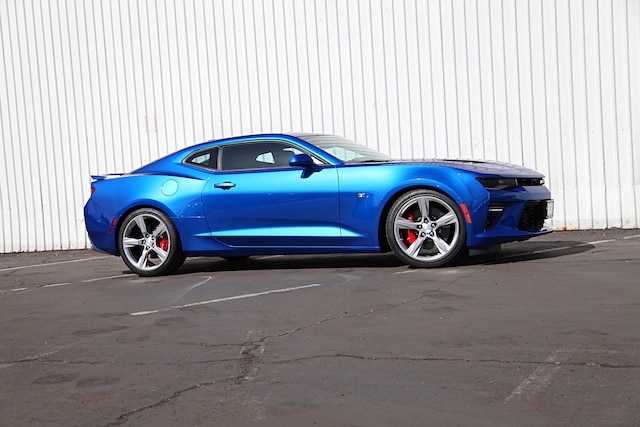 Have you ever bought a new car and had the itch to slap on some aftermarket upgrades but then realize it would toss your precious warranty out the window? You’re not alone. In fact, it’s a pretty common predicament, especially for those of us who are into looking good and going fast. Luckily, Chevrolet caught on and decided to offer some trick parts via Chevrolet Performance that, if dealer installed, won’t void your warranty. It really is as good as it sounds.

As it turned out, our local Chevy dealership, Guaranty Chevrolet in Santa Ana, California, was planning to bolt on some Chevrolet Performance suspension parts on a brand-new 2018 Camaro 1SS so we decided to tag along. And by tag along we mean we got to take the Camaro out for a drive before handing it over to Richard Grable, one of their super knowledgeable techs, to install the new parts. Afterward, we got to take it for another “spirited” drive, so essentially, we got to have all the fun—it’s a tough job but someone’s gotta do it.

In Part One of this two-part series, we’re focusing on the handling in the form of suspension and brake upgrades. Replacing the stock suspension components will be 20mm lower springs, upgraded shocks, and beefier sway bars all the way around. Brembo 14.5-inch, two-piece slotted rotors and six-piston calipers with pads will take the place of the stock units up front, while the rear gets new Brembo four-piston calipers.

After the install, we took the SS out for a drive over nearby canyon roads and were pleased to find the Camaro felt even more taut and controlled than before. Although the car felt planted and body roll was minimal, the overall ride quality was preserved—it still felt plenty comfortable for daily driving duties. The difference in braking performance was less since we weren’t hot-lapping the Camaro on a road course, but there’s no doubt in our minds that the new setup would certainly stave off brake fade much better than the stock units when being driven at 10/10ths. And we can’t forget the looks—the 20mm lowering springs gave the Camaro just the right amount of drop for a more aggressive stance, but not so aggressive to scrape on every driveway or parking lot speed bump. Oh, and the bright-red Brembo brake calipers peeking from behind the five-spoke aluminum wheels are a nice touch, too.

So now that you’ve got an idea of what you’d be getting if you opted to have all this installed by the dealer on your 2018 Camaro (pre or post purchase), keep reading and we’ll show you what it takes to replace the old, new with the new, new. CHP

1. Here’s a look at all the new suspension goodies that come with the kit from Chevrolet Performance. The only parts we won’t be installing are the front lower control arms since our car is brand new, and these are stock replacements. If the car had more miles on it, we would consider installing those, also.

2. As you may or may not know, the front brakes do most of the work when it comes to bringing a car down from speed, which is why we will be upgrading the stock rotors (left) with bigger, slotted rotors to dissipate heat better (right) and to help eliminate brake fade.

3. Guaranty Chevrolet technician Richard Grable, along with the help of Parts Manager Carl Lutes, got to work on the front by removing a few inner fender covers and then the skidplate to gain access to all the suspension components and allow for the stock sway bar to be removed easily.

5. Two bolts on the back of the caliper are all that’s left holding it on, then it comes right off. Richard then removed the rotor by unscrewing one little screw that secures it to the hub.

6. With the rotor removed, the only thing left to take off is the stock dust shield, which will be replaced by a smaller shield that clears the larger caliper to come.

7. Moving forward, Richard removed the MacPherson strut assembly by undoing the three bolts on top of the shock tower inside the engine bay. Pretty simple stuff.

8. The shock and spring assembly came out easily after he removed the last two bolts that connect the strut to the spindle.

9. Disassembly continues with the removal of the old sway bar. Richard first disconnects the endlinks, which will be reused with the new Chevrolet Performance sway bar.

10. Two bolts on either side of the sway bar are removed to release it from the front subframe. With the skidplate out of the way, it drops down with nothing to get in its way.

11. Richard then uses a spring compressor to remove the stock strut mount and then uses that to reassemble using the new strut and 20mm lowering spring. He installs it back in the car the same way it came out, with three bolts on the strut tower and two on the spindle.

12. Next up, he installs that smaller dust shield we mentioned earlier.

13. Then on goes the new brake rotor, which once fully assembled with the new caliper and pads will have to be bled. According to Chevrolet, the proper bed-in process of the new brakes call for 20 hard stops from 30 miles per hour with room for cooling between stops.

14. He then reinstalls the brake line and ABS sensor onto the new Brembo six-piston caliper.

15. To finish up the front, it’s just a matter of tightening the last two bolts holding the new caliper in place and repeating the process on the opposite side.

16. Moving to the rear, we will only be replacing the stock calipers so the factory brake pads and their retainers need to be removed and reused.

17. To remove the factory spring, Richard removes two bolts on the lower control arm—one connecting it to the knuckle and one holding the shock in place—and loosens the bolt holding the control arm to the subframe.

18. While supporting the rest of the suspension with a jack, he lowers the control arm and pulls out the old spring and replaces it with the new one, swapping the stock rubber spring mount to the new spring in the process.

19. To replace the factory shocks, Richard removed the top shock mount by undoing three top bolts hiding behind the fender liner. He then removed the bottom bolt from the lower control arm and pulled the whole shock out.

20. Using an impact wrench, he removed the top nut holding the shock to the shock mount and swapped the mount onto the new Chevrolet Performance shock.

22. The final part of the suspension to be replaced is the rear sway bar, which is removed just like the front. First, Richard removed the endlinks to reuse with the new sway bar.

23. He then removed the two bolts on either side holding the sway bar to the subframe. At this point, some finagling was required to get the bar out, but we’re also replacing the exhaust (stay tuned for the next installment of the 2018 Camaro performance upgrade story), so with part of the exhaust out of the way it was much easier to remove and replace it with the upgraded sway bar.

24. Finally, Richard completed the rear by bolting on the new Brembo four-piston calipers and re-installing the factory brake pads.

25. While the before and after might not look too dramatic at a glance, the aggressive stance and big brakes add up to a sweet-looking and performing 2018 Camaro SS that, after those modifications, is still covered by the factory warranty—nice!