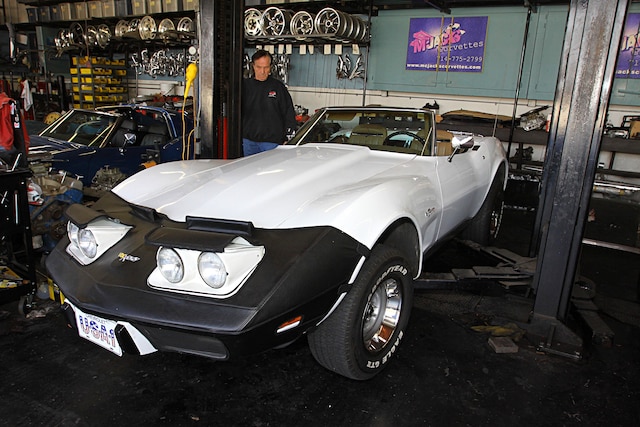 “Not every used C3 Corvette is a creampuff. In fact, given enough time and after many miles driven there is a steering problem that can crop up and can become a very dangerous, complete loss of steering.” Those were the words of Jack Grubisich at his Santa Ana, California, business McJacks Corvettes regarding the white C3 convertible he had up on a lift for repairs. Jack went on to explain that, starting with 1963 C2 Corvettes and up through 1982 C3 Corvettes equipped with power steering, flexing in the steering geometry fatigues the frame bracket holding the power steering cylinder (ram) to the framerail, where eventually the frame bracket could separate from the framerail.

We took a closer look underneath as Grubisich pointed to the power steering cylinder and showed how the frame bracket holding it was ready to rip away from the frame. And it wasn’t the first time someone tried to address the problem on this particular C3 as evidenced by traces of bad welds and the use of improper parts.

There are multiple areas to hunt for the source of sloppy steering on a C3 Corvette, beginning with the rag joint right up to suspecting a worn-out steering box is to blame. That said, after repairing a detached frame bracket Grubisich recommended a close inspection of the entire front suspension and, in particular, all the steering components.

In essence, a restoration in addition to properly repairing the problem, Grubisich showed us how to complete the job to make it look like it never happened.

2. A close inspection reveals bad welds, the wrong parts and a power steering cylinder frame bracket ready to fall off.

4. Next, the bad welds were ground off the framerail. Then, a determination was made as to how much metal needed to be cut away before a proper fix could be begun.

5. A die grinder was used to cut out the area marked using a scratch awl.

6. Here’s the area cut out and readied to accept a steel patch.

7. Grubisich used inside dial calipers to measure the dimensions needed for the steel patch.

8. He then fabricated the steel patch from the same gauge steel as the framerail.

10. Grubisich paid close attention not to over-restore the jagged edge left by the factory on the overlapping inside framerail.

11. The frame bracket was used as the template to re-drill the four 5/16-inch mounting holes for the two bracket reinforcement plates.

12. Grubisich had to search no further than McJacks Corvettes onsite salvage yard to obtain used parts in perfect condition.

13. The two frame bracket reinforcement plates enter into place by inserting them through a large hole found on either side of the framerail.

14. Meticulous attention must be paid to reproducing the step on the bottom of the framerail correctly in order to mate with the step on the power steering cylinder frame bracket.

15. There it is. The job is completed and a crusty old C3 Corvette returns to the street in much safer condition with an unmolested appearance.